A political feud filled with jabs over sanctuary cities and Samuel Adams beer between Republican U.S. Senate candidate Geoff Diehl and Democratic Somerville Mayor Joseph Curtatone has added its latest installment with a call for a beer-based bet on next month’s midterm elections.

Curtatone, who has vowed never to drink the Boston Beer Co.’s brew again, dared Diehl Monday to a wager: if Diehl wins his Senate race, Curtatone would have to post a video of himself sipping on a Sam Adams and offering his congratulations. If he loses, Diehl would have to post one of himself drinking a Slumbrew, a Somerville craft beer, while praising sanctuary cities.

Open challenge to @DiehlForSenate, if you win in Nov I’ll post a video of me drinking a Sam Adams & congratulating you on your win. If you lose, you post one of you drinking @Slumbrew & praising #SanctuaryCities #mapoli #masen2018

The two lawmakers started sparring through Twitter in August in the days after Curtatone announced that he was boycotting Sam Adams beer because founder Jim Koch expressed gratitude for corporate tax cuts championed by the Trump administration.

In tweets from his campaign account at the time, Diehl quipped that not only did he support the tax reform, but the “Sanctuary City Mayor” wanted to hurt a Massachusetts business while he “puts criminal illegal immigrants ahead of citizens.”

The sound-off led to a Twitter exchange with Diehl tweeting that Curtatone was only looking to score points with his “far-left base,” while Curtatone wrote back that he’s looking forward to seeing Diehl get “crushed” in November.

You should be 100% less racist. We’re a city of immigrants and we’re not going to start treating them like 2nd class humans to appease you. Looking forward to seeing you get crushed. #mapoli

“I’m pretty confident we’re going to crush Diehl at the local level, but this is a good reminder not to take anything for granted,” Curtatone tweeted in response to someone pointing out numerous Diehl signs in Somerville. “We all need to make sure we send (Elizabeth Warren) back to Washington.”

Diehl offered a play on words.

“We’re going to ‘crush’ a (Samuel Adams beer) in (Joe Curtatone’s) honor after we beat (Elizabeth Warren) this November!” Diehl tweeted. “We know you won’t participate since you’re against job creation from the tax cuts…”

Thanks to one of our supporters in #Somerville for sending us this picture of one of the large DIEHL FOR U.S. SENATE signs that triggered @JoeCurtatone earlier today. We’re gonna #DefeatElizabethWarren and enjoy a @SamuelAdamsBeer when we do! #mapoli #masen #masen2018 #magop pic.twitter.com/u7rjB38k45

On Monday, after Curtatone’s call for the bet, Diehl’s campaign pointed to the successful 2014 ballot initiative the Senate candidate led to repeal automatic gas tax increases set by the state Legislature. Opponents at the time, including Curtatone, said that the money was needed for infrastructure upgrades.

The Sam Adams will be on Diehl next month, Diehl tweeted.

“Mayor (Joe Curtatone) did not live up to the last bet when Geoff won the repeal of automatic gas tax hikes saving taxpayers $2 billion. We will send him a case of (Samuel Adams beer) when Geoff wins in November.”

“If you actually think you’re going to win, take the bet. It’s your chance to own a lib,” he tweeted at Diehl. “We’ve never wagered on anything before this. At least I’m offering you the chance to drink a tasty beer.”

Coward’s response. If you actually think you’re going to win, take the bet. It’s your chance to own a lib. We’ve never wagered on anything before this. At least I’m offering you the chance to drink a tasty beer. #mapoli #masen2018 https://t.co/LBwycBd3ba

There was some disagreement over whether there was any bet dishonored between the two officials in 2014. Curtatone said there was none, while Diehl said the mayor was supposed to wear a “Yes on 1” sweatshirt after the loss.

Diehl said Curtatone won’t admit that he failed to honor it. 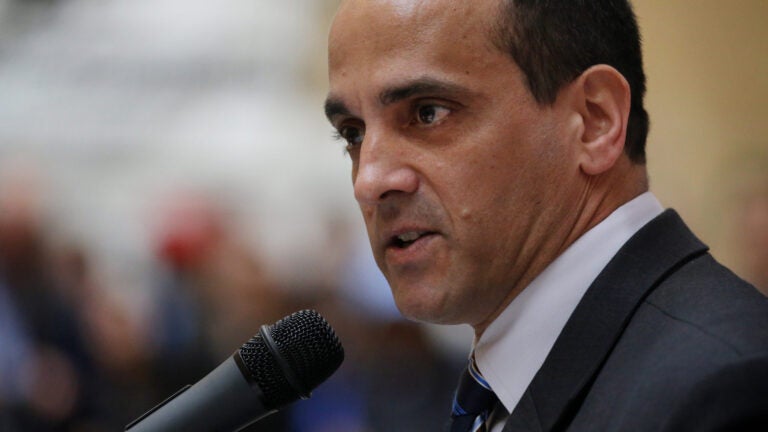