NEW YORK (AP) — Before hopping on a plane to Paris on Friday, President Trump insulted some more reporters, threatened that others may have their White House credentials pulled like CNN’s Jim Acosta and disputed reports that his press secretary spread a doctored video of Acosta’s encounter with a White House intern.

During a brief media availability outside the White House, the president gave more fodder to fans who enjoy watching him scrap with journalists.

Trump said “nobody manipulated” a video distributed by White House press secretary Sarah Sanders that showed Acosta resisting an intern’s attempt to take a microphone from him during a news conference on Friday. A video expert had told The Associated Press that the video appeared doctored to speed up Acosta’s arm movement and make his gesture more threatening; the White House used that encounter to justify pulling Acosta’s credentials.

“It wasn’t doctored,” the president said. “They gave a close-up view. That’s not doctoring.”

Abba Shapiro, an independent video producer hired by The Associated Press to compare the footage tweeted by Shapiro with the AP’s coverage of the news conference, said the alteration made was “too precise to be an accident.”

Two late-night comics, Stephen Colbert and Jimmy Kimmel, both said on their shows Thursday that Sanders should be fired for her action.

“The fact that the White House press secretary is promoting this doctored video is reprehensible, and grounds for dismissal,” Colbert said.

While Trump called the reporter who asked about the video “dishonest,” that was mild compared to his treatment of April Ryan, a White House correspondent for American Urban Radio Networks, and CNN’s Abby Phillip.

In response, CNN said through its Twitter feed that Phillip’s question wasn’t stupid. “In fact, she asked the most pertinent question of the day,” CNN said. Trump’s insults “are nothing new. And never surprising,” CNN said.

The attack on Ryan was unprovoked, although the president had appeared upset at Wednesday’s news conference when Ryan stood up and asked him, without a microphone, about voter suppression in the midterm elections. Ryan wasn’t among Trump’s questioners Friday.

“I watch her get up,” he said Friday. “I mean, you talk about somebody that’s a loser, she doesn’t know what the hell she’s doing. She gets publicity, and then she gets a pay raise, or she gets a contract with, I think CNN. But she’s very nasty, and she shouldn’t be.”

Ryan became a CNN contributor last year. She said on the network that the three presidents she covered prior to Trump may not have liked every question she asked, but understood why she did so.

“At the end of the day it was part of the American process, it was part of what our Founding Fathers put in place for the accountability of the president of the United States,” she said. “This president seems not to like it, so therefore I’m a loser.”

Between Ryan, Phillip and Yamiche Alcindor of PBS’ “NewsHour,” that makes three black, female reporters that the president dealt with harshly in the past three days. Trump on Wednesday accused Alcindor of asking a racist question when she inquired about the president receiving support from some white nationalists.

Trump said he hadn’t made a decision when asked by a reporter how long Acosta would remain in the “penalty box.” But he said there could be others.

Olivier Knox, president of the White House Correspondents Association, said his organization’s board met Thursday with Sanders and White House communications director Bill Shine for what it expected to be a series of conversations about Acosta’s status.

Despite losing his White House pass, and the ability to travel with Trump and the rest of the press corps on Air Force One, Acosta went to Paris to cover Trump’s meeting with world leaders this weekend.

He tweeted a photo of himself standing in front of the Eiffel Tower early Friday.

Greetings from Paris where we are on the ground for Trump’s trip to France. #1A pic.twitter.com/rno9bPFcJV 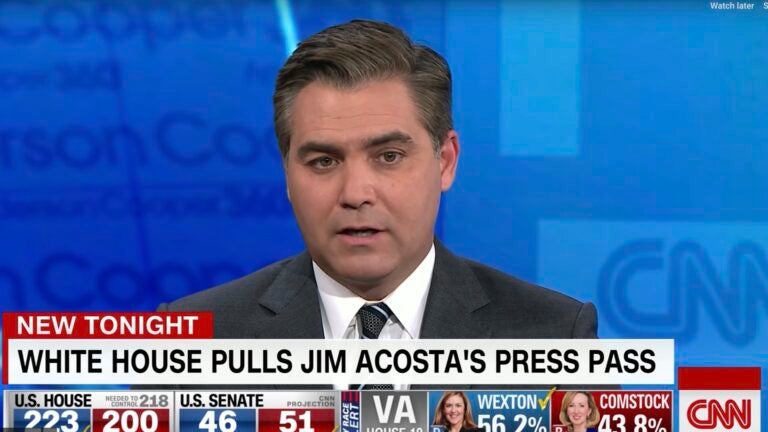