WASHINGTON (AP) — In an echo of his campaign rhetoric, President Donald Trump is back to portraying himself as the Paul Revere of the terrorism age — the one who told the country Osama bin Laden was coming. There was less to his foreshadowing than he states.

Trump’s tweet about bin Laden on Monday has some truth to it: “I pointed him out in my book just BEFORE the attack on the World Trade Center.”

But the book, with only a passing mention of bin Laden, did not do more than point to the al-Qaida leader as one of many threats to U.S. security. Trump’s book, “The America We Deserve,” came out more than 1 ½ years before al-Qaida’s deadly attack on the U.S. on Sept. 11, 2001, not just before.

Trump’s reason for resurfacing the matter: persistent criticisms from retired Adm. William McRaven, who has branded Trump’s laceration of the news media “the greatest threat to democracy” in his lifetime. As commander of the Pentagon’s Joint Special Operations Command in 2011, he oversaw the raid that killed bin Laden in Pakistan.

Trump accused McRaven in a Fox News interview broadcast on the weekend of being a “Hillary Clinton backer and an Obama backer.” McRaven said he did not endorse anyone in 2016 and told CNN he is a fan of both former Presidents George W. Bush and Barack Obama, having served under them. “I admire all presidents, regardless of their political party, who uphold the dignity of the office and who use that office to bring the nation together in challenging times,” he said pointedly.

TRUMP’s tweet: “Of course we should have captured Osama Bin Laden long before we did. I pointed him out in my book just BEFORE the attack on the World Trade Center. President Clinton famously missed his shot. We paid Pakistan Billions of Dollars & they never told us he was living there. Fools!”

THE FACTS: There was nothing original or clairvoyant in the reference to bin Laden in Trump’s 2000 book. As part of his criticism of what he considered Bill Clinton’s haphazard approach to U.S. security as president, he stated: “One day we’re told that a shadowy figure with no fixed address named Osama bin Laden is public enemy Number One, and U.S. jetfighters lay waste to his camp in Afghanistan. He escapes back under some rock, and a few news cycles later it’s on to a new enemy and new crisis.”

Trump’s book did not call for further U.S. action against bin Laden or al-Qaida to follow up on attacks Clinton ordered in 1998 in Afghanistan and Sudan after al-Qaida bombed the U.S. embassies in Kenya and Tanzania. The U.S. attacks were meant to disrupt bin Laden’s network and destroy some of al-Qaida’s infrastructure, such as a factory in Sudan associated with the production of a nerve gas ingredient. They “missed” in the sense that bin Laden was not killed in them, and al-Qaida was able to pull off 9/11 three years later.

In the campaign, Trump boasted even more expansively about being a soothsayer. He stated that his book said of bin Laden, “you better take him out,” which it did not say, and that he “predicted Osama bin Laden” back when “nobody really knew who he was.” Bin Laden was well known by the CIA, other national security operations, experts and the public long before 9/11; the debate is over whether Clinton and successor Bush could have done enough against al-Qaida to prevent the 2001 attacks.

In passages on terrorism, Trump’s book correctly predicted that the U.S. was at risk of a terrorist attack that would make the 1993 World Trade Center bombing pale by comparison. That was a widespread concern at the time, as Trump suggested in stating “no sensible analyst rejects this possibility.” Trump did not explicitly tie that threat to al-Qaida and thought an attack might come through the use of a miniaturized weapon of mass destruction, like a nuclear device in a suitcase or anthrax. 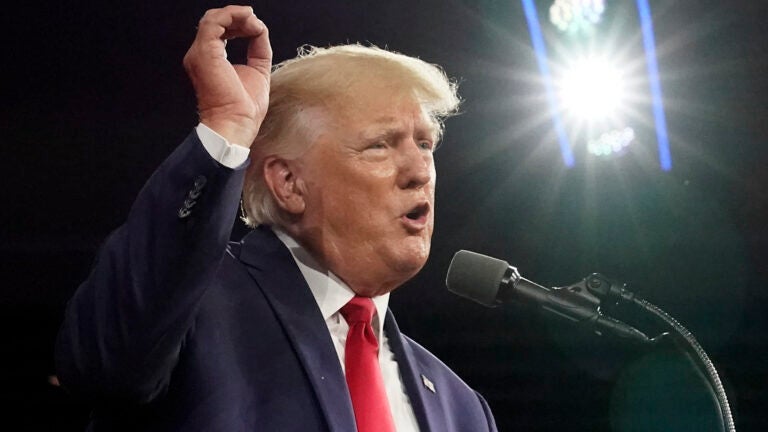 Trump deflects blame for Jan. 6 silence, says he wanted to march to Capitol