WASHINGTON — Sen. Elizabeth Warren inched closer to a likely presidential run Thursday, making a major foreign policy speech that cited the need to rein in “unsustainable and ill-advised military commitments” across the world.

The speech had several policy proposals that are sure to reverberate among other 2020 presidential hopefuls. Warren, D-Mass., called for an end to the war in Afghanistan, a rethinking of U.S. troop deployment abroad, and a commitment to a new nuclear posture including increased arms control and a no-first-use policy.

“I wanted to come here today because there’s a lot at stake — and it’s your generation that will live with the consequences of the decisions being made today,” Warren said at American University in Washington. “Whether our leaders recognize it or not, after years as the world’s lone superpower, the United States is entering a new period of competition. Democracy is running headlong into the ideologies of nationalism, authoritarianism and corruption.”

She added: “Americans are an adaptive, resilient people, and we have met hard challenges head-on before. We can work together, as we have before, to strengthen democracy at home and abroad. We can build a foreign policy that works for all Americans, not just wealthy elites.”

Warren also linked foreign policy with her trademark populist rhetoric about corporate greed and inequality, saying the United States “can project power abroad only if we are strong and secure at home.”

In the prepared speech, a rarity for the often-extemporaneous Warren, she announced her opposition to the renegotiated free trade agreement President Donald Trump is set to sign this week and, as Trump regularly takes credit for major increases in military spending, she called for major cuts to what she called the United States’ “bloated defense budget.”

“Investments at home strengthen the economy, but these investments also serve national security,” she said. “A 21st-century industrial policy, for example, would produce good jobs that provide dignity, respect and a living wage, and it would also reinforce U.S. international economic power.”

“Our needs at home are many: infrastructure to increase connectivity and expand opportunity across the United States,” Warren added. “A progressive tax system that requires the wealthy to pay their fair share. A government that is not for sale to the highest bidder.”

“In some cases, as with our support for Saudi Arabia’s proxy war in Yemen, U.S. policies risk generating even more extremism,” she said. 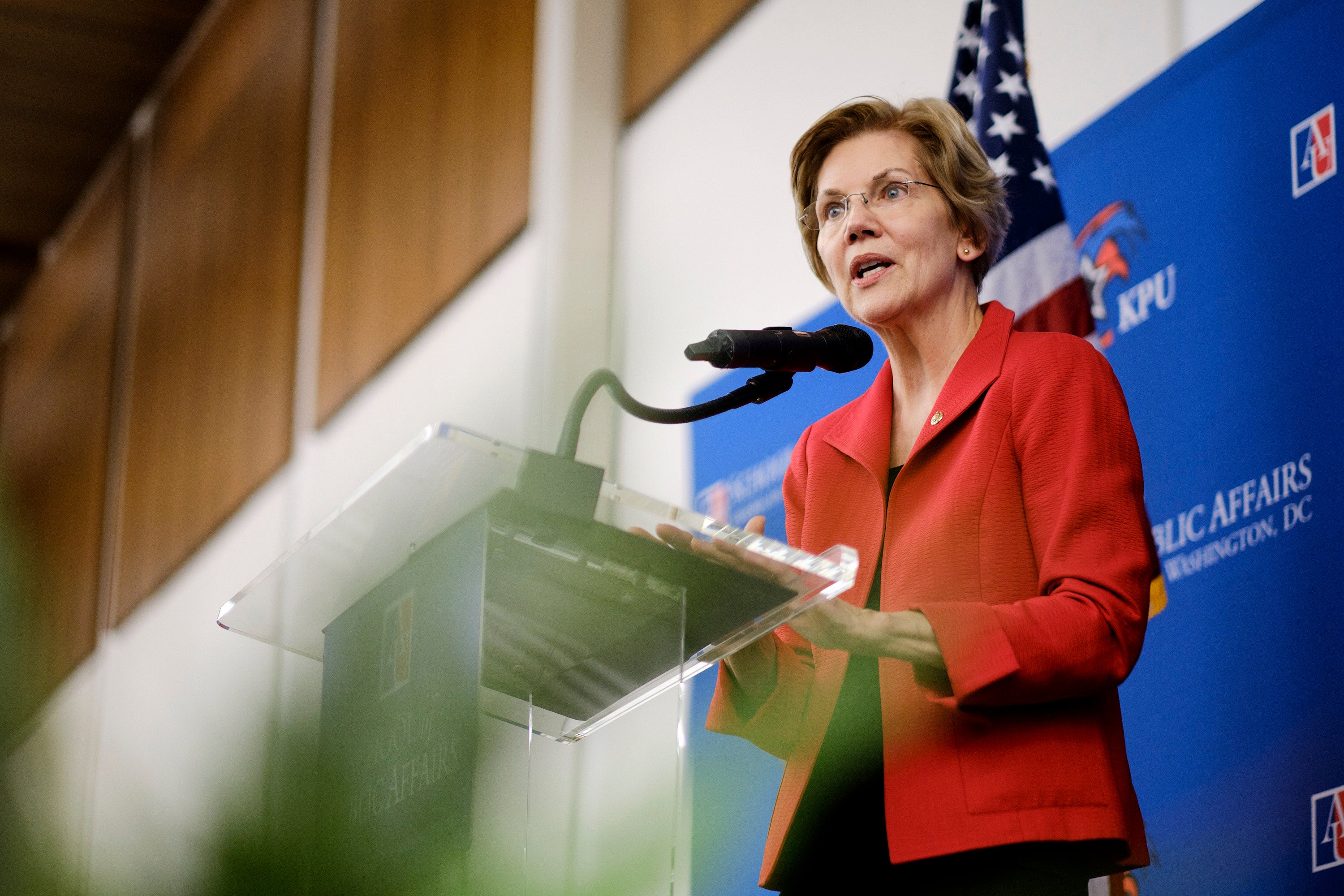 “If you’re skeptical that this a problem, consider this: The president of the United States has refused to halt arms sales to Saudi Arabia in part because he is more interested in appeasing U.S. defense contractors than holding the Saudis accountable for the murder of a Washington Post journalist or for the thousands of Yemeni civilians killed by those weapons,” she added.

For Warren, who is considered among the Democratic presidential front-runners should she choose to run, the speech marked the culmination of a yearslong effort to shore up her foreign policy credentials.

She secured a spot on the Senate Armed Forces Committee after the 2016 presidential election, and she has taken high-profile trips to visit troops with Republicans such as Sens. Lindsey Graham of South Carolina and John McCain of Arizona, who died in August.

In recent years, progressives like Sen. Bernie Sanders, I-Vt., were consistently panned by foreign policy experts for a lack of expertise that, they said, amounted to naïveté. Thursday’s speech underscores how proactively Warren is trying to distance herself from that pack, straddling the line between left-leaning talking points and a serious, informed approach to the world’s dangers.

Among others who have expressed interest in the 2020 Democratic nomination, some have credible claims to foreign policy expertise, including former Vice President Joe Biden and former Secretary of State John Kerry.

But if Warren were to announce her candidacy, few of her fellow first-time presidential candidates would have similar foreign policy credentials or have similarly articulated a vision for the U.S. role in the international order.

Warren “details three core nuclear security principles for a safer planet,” Joseph Cirincione, the president of the Ploughshares Fund, a foundation focused on conflict resolution, said on Twitter. “They’re straightforward, reasonable and — most of all — achievable. Everyone should embrace them.”

BREAKING: @SenWarren details three core nuclear security principles for a safer planet. They’re straightforward, reasonable and – most of all – achievable. Everyone should embrace them. pic.twitter.com/SwHRfzXsDt

Warren also conducted a question-and-answer session after the speech, where she took questions from students regarding Russia sanctions and climate change.

The speech will provide plenty of fodder for Warren’s conservative critics. Far from the “America First” mantra of Trump, Warren’s call to contract the military budget and limit the influence of contractors will be anathema to many foreign policy hawks.

She also specifically called out Trump for encouraging authoritarian regimes and called it a critical time to restore trust in American democracy.

“President Trump’s actions and instincts align with those of authoritarian regimes around the globe,” she said. “He embraces dictators of all stripes. He cozies up to white nationalists. He undermines the free press and incites violence against journalists. He attacks the independence of our judiciary. He wraps himself in the flag and co-opts the military for partisan purposes — but he can’t be bothered to visit our troops.”

In the largely supportive audience of hundreds, mostly students, jabs at the president were well received. Also a hit: Warren invoking her signature tag line, “Nevertheless, she persisted.”

“Fifty-five years ago, when President John F. Kennedy spoke here at American University, he said that ‘our problems are man-made — therefore, they can be solved by man.’

“The same is true today,” Warren said. “OK, I’d add that they can also be solved by women, too.”

After recent Israel statement, Ed Markey is facing a backlash — from the Markeyverse