A handful of male lawmakers dressed up for a recent hearing they presided over in the New Hampshire House of Representatives, donning pearl necklaces as activists testified about their experiences with gun violence.

Images from the statehouse – where legislators were considering arguments over a bill that would make it easier to take guns away from potentially dangerous people – caromed across social media as critics lobbed accusations of sexism and insensitivity at the jewelry-clad men.

The implication was clear, they said: These politicians thought gun-control activists were “clutching their pearls” in overwrought and self-righteous outrage – and, specifically, female outrage.

The advocates, who were volunteers with the group Moms Demand Action for Gun Sense in America, said they felt mocked, like some of the lawmakers weren’t interested in hearing stories about how gun violence has impacted their lives.

“It really is shameful to behave that way when your constituents are being brave enough to share their stories,” said Shannon Watts, founder of Moms Demand Action, in an interview. “They clearly did not come to this hearing with open minds or compassion for their constituents.”

The bill, known as a “red flag” law, would allow family and law enforcement to obtain court orders that restrict gun access for individuals that may pose an immediate risk to themselves or others. If New Hampshire adopts the legislation, they’d join 14 other states that have done so, many in the wake of the country’s deadliest mass shootings.

Watts, who attended the hearing, said she counted at least five representatives – all men – wearing pearls and sitting on the committee that held the hearing. One of them also appeared to sport a pin in the shape of a semiautomatic rifle on his lapel. She snapped photos of the lawmakers and posted them on Twitter, where she has nearly 300,000 followers, sparking outrage near and far.

Of the 13 person ERPO hearing committee, 10 of the lawmakers are men; half of them are wearing pearls to mock @MomsDemand volunteers. Meanwhile, their constituents are in tears as they testify about gun suicides and domestic gun violence in their families. #NHPolitics pic.twitter.com/eVIS73yfoR

The three lawmakers clearly identifiable in her pictures, Reps. Daryl Abbas, Scott Wallace and David Welch, are all Republicans. Calls to their State House offices were either not returned or met with a busy line and a full voice mailbox.

“The PEARLS are in support of the Women’s Defense League. Women who ACTUALLY PROMOTE GUN SAFETY and WOMEN’S RIGHTS,” tweeted Kimberly Morin, president of the group.

The PEARLS are in support of the Women’s Defense League. Women who ACTUALLY PROMOTE GUN SAFETY and WOMEN’S RIGHTS #nhpolitics #HB687 pic.twitter.com/pd0Pjd8ZqT

Morin told a local newspaper that they’ve been wearing pearls for this reason since 2016. She accused Watts, who lives in Colorado, of being an out-of-state “paid hack” who is lobbying for gun control legislation from afar and whose group doesn’t understand local politics. In a day-long Twitter offensive, Morin also called the Moms Demand Action volunteers “harpies,” a reference to a creature from Greek mythology that had the body of a bird and the head of a human woman.

The Women’s Defense League did not respond to an interview request.

Watts said Morin is a “gun extremist” who has a history of feuds with Moms Demand Action and its New Hampshire chapter. And whatever the lawmakers’ intention, Watts said, they should know better.

“When you are a male lawmaker and you come to a hearing wearing a pearl necklace and a semiautomatic rifle pin, you sort of lose control of the narrative,” she said. “It seems like a pretty foolish choice.”

State Rep. Debra Altschiller, D, who sponsored the bill, said her Republican counterparts should have been more considerate as they listened to women recount stories of domestic violence and death by suicide.

“There are families who have lost loved ones here & this mocking prop shows how little they empathize with suicide,” Altschiller wrote on Twitter.

“I was raised to disagree without being disagreeable,” State Rep. Matt Wilhelm, D, said. “Granite Staters deserve to be respected when they come to testify in their House of Representatives.”

The commotion also elicited a volley of tweets-in-solidarity from Democratic presidential hopefuls.

“These moms are fighting to confront gun violence and protect our children,” Sen. Kamala Harris, D-Calif., added. “They don’t deserve to be mocked.”

Moms who want to keep their kids safe from gun violence don’t deserve this. https://t.co/oQnQatlx4x

Too many guns are falling into the hands of dangerous people, threatening kids’ lives and making our communities less safe. These moms are fighting to confront gun violence and protect our children. They don’t deserve to be mocked. We stand with you, @momsdemand. https://t.co/qizaz7a8vi

Watts said the New Hampshire lawmakers did indeed send a message, but it was less about clutching pearls and more about running for office.

“It’s my hope,” she said, “that the Moms Demand Action volunteers who sat through the hearing today will consider running against the men who had the audacity to mock the legislative process.” 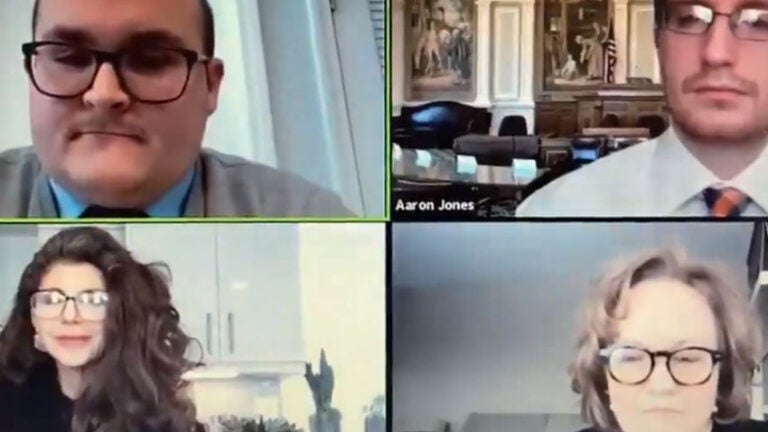