On CNN on Thursday night, White House spokesman Hogan Gidley spent nearly eight minutes sparring with Anderson Cooper, who repeatedly talked over him to demand, “Did the president lie?”

An hour later, White House press secretary Sarah Sanders encountered a wholly different tenor on Fox News, where host Sean Hannity gave her more than three uncontested minutes to roast “Democrats and members of the liberal media” and to insist that Trump had been “totally vindicated.”

The topic of each interview, of course, was the public release of special counsel Robert Mueller’s report, and more specifically its conclusion that Sanders had misled reporters when she claimed that “countless” FBI agents contacted her to back the president’s decision to fire the bureau’s director, James Comey.

Their differing receptions point to a bifurcated media landscape and vividly illustrate how even a seemingly clear conclusion from the investigation – that Sanders fed falsehoods to reporters – can become a partisan ping-pong ball on the cable airwaves.

Mueller had zeroed in on a White House briefing on May 10, 2017, when a reporter responded to Sanders’s claim that FBI agents had lost confidence in Comey by telling her that in fact a “vast majority” of the agency still supported him. Sanders replied, “Look, we’ve heard from countless members of the FBI that say very different things.”

Mueller found that wasn’t true and said Sanders told investigators the claim was a “slip of the tongue.” As The Washington Post’s Erik Wemple noted, though, the next day she repeated the same claim and affirmed that at least 50 FBI employees had contacted her. Not so, Mueller again said. That comment was made “in the heat of the moment,” Sanders told Mueller’s team, which concluded that it “was not founded on anything.”

When Cooper pushed Gidley on the point, he at first demurred, saying that “she can well defend herself. I’m not here to defend Sarah Sanders.”

“Is Sarah going to acknowledge that she lied to the American people?” Cooper asked.

“Sarah’s going to defend herself tonight on another network,” Gidley said. “Right. Of course she will,” Cooper replied.

That network was Fox News. And the confines of “Hannity” could hardly have been friendlier.

The host started by offering that he too had heard from a vast array of FBI agents happy that Comey had been axed.

“The media is attacking you today,” Hannity said, before offering that “every FBI rank-and-file guy, the 99.9 percent I know, have all thanked me . . . they were hurt by a few at the top and they’re angry about that. And you said that, but explain.”

Sanders offered a brief mea culpa, but then insisted that the only falsehood she had uttered was the word “countless.”

“Look, I acknowledge that I had a slip of the tongue when I used the word ‘countless,’ ” she told Hannity. “But it’s not untrue and certainly you just echoed exactly the sentiment and the point that I was making, that a number of current and former FBI agents agreed with the president.”

But what of Mueller’s conclusion that her entire claim was “not founded on anything?”

Hannity didn’t ask. Cooper did push back after Gidley told the CNN host that he too had seen supportive texts and emails to Sanders from FBI agents. Cooper said: “That’s not what she said under oath. She said . . . it wasn’t based on anything.”

Still, Gidley insisted that her point was true no matter what Mueller wrote in the report based on sworn testimony.

“That was what the conclusion was from the report, not what she said,” he said.

On “Hannity,” Sanders used the rest of her time on air to bash the press, which was largely vindicated in its reporting on the Russia probe by Mueller’s report, and to claim unconditional victory for the president.

“I think that the White House is in a great position and what we’ve been saying for last two and a half years has finally, totally been vindicated. The president is totally exonerated. No collusion, no obstruction,” she said. “It is outrageous the way that the media and Democrats have behaved.”

Hannity let Sanders speak without interruption. Gidley didn’t find as welcoming an audience in Cooper when he made a similar argument.

The CNN host repeatedly pushed Gidley on Mueller’s finding that Trump had pressured Deputy Attorney General Rod Rosenstein to lie and claim that it was his recommendation to fire Comey, a plan Rosenstein refused to go along with.

“Your office, according to Robert Mueller, sworn testimony, tried to get Rod Rosenstein to lie. What’s up with that?” Cooper asked.

“Again, this is so great we’re going to parse every word of this,” Gidley said. “If the president had done something wrong, he’d be indicted.”

Cooper wouldn’t drop the question, though. With each variation, Gidley replied that a lack of indictments proved everything was legal. (A claim, as Cooper pointed out, that didn’t bear out as Mueller was abiding by long-standing Justice Department rules that a sitting president can’t be indicted.)

Three times in a row, Cooper asked the same question over a talking Gidley without receiving an answer: “Did the president lie?”

Cooper ended the interview by saying, “I feel bad that you feel scared to say that your boss lied.” 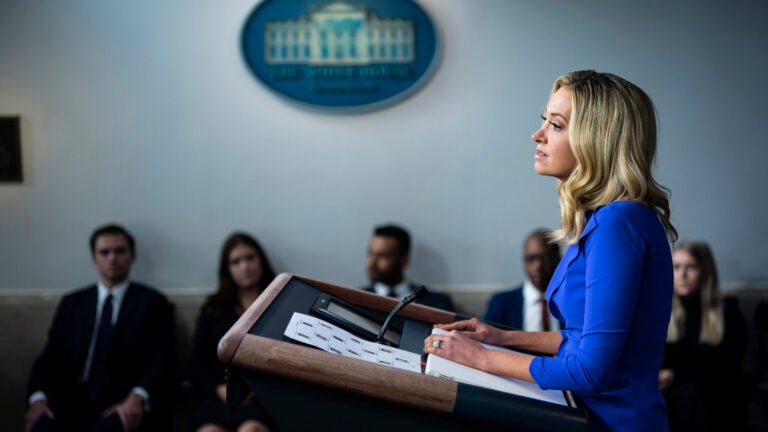 Fox News hires Larry Kudlow; Kayleigh McEnany may be next