It has become a rallying cry of the left: College should be free, or, at the very least, should not come with mountains of debt.

Sen. Elizabeth Warren this week laid out one of the most ambitious plans yet, promising free public college and debt clearance for the majority of student loan holders. Cost: $1.25 trillion over 10 years, billed to the ultrawealthy.

The announcement from Warren, a Massachusetts Democrat who is running for president, had many students and former students cheering. It also raised long-simmering questions about the cost and quality of higher education, and who should pay for it.

Warren’s plan would offer a one-time clearance of student debt for 75 percent of borrowers, and at least some relief for 42 million Americans. It would cancel $640 billion of the $1.5 trillion in outstanding student debt.

For Samantha Morgan and her husband, Justin, the plan would be life-changing. He works as a laboratory manager, and she works part time for a nonprofit. They said they had accrued about $70,000 in student loan debt between them and are making payments on an income-based repayment plan.

“Your monthly payment is so low that you’re not paying your loans because interest accrues so fast,” Samantha Morgan, 30, said. “My loan has actually gotten bigger.”

If they faithfully make their payments for 20 years, the loans would be forgiven. The couple, who have a 3-year-old son, said they could not afford to buy a house and were reluctant to have another child, in part because of their debt burden.

The Morgans are precisely the kind of people that Warren’s proposal is meant to help. But one criticism of the plan, and of other candidates’ ideas to eliminate college tuition or student debt, is that it would benefit some on the road to becoming doctors, lawyers and other well-paid professionals.

The Warren campaign said that the plan was designed both to capture a wide swath of borrowers and to target those who need it most. Its payouts are progressive, canceling up to $50,000 for every person with a household income under $100,000, but gradually declining for households with incomes up to $250,000. Those who make more than $250,000 would get nothing.

Still, to Sandy Baum, an expert on college affordability at the Urban Institute, $50,000 in debt clearance was too much. Forgiving $10,000 in loans would eliminate debt for a third of borrowers, she said.

“That is virtually all the borrowers who are low-income, who don’t have a bachelor’s degree, who dropped out of college, who are struggling most,” as opposed to those who are in a better position to pay off their loans, Baum said. The average federal student loan debt is $32,000, according to federal data.

An Urban Institute analysis found that the loan cancellation plan would benefit black students — who on average borrow more for college — more than other racial and ethnic groups. Warren campaign officials said the plan was meant to address the fact that black students tend to have fewer family assets to draw on.

The plan got a positive reception from several students at New York University who were enjoying a sunny spring day this week. Some spoke of benefits beyond a financial boon.

Andrew O’Connor, 25, a second-year law student, said loan cancellation could liberate him and his classmates from the pressure of going into corporate law, rather than public interest law.

Another law student, Catherine Larsen, 26, said she had taken out loans just to pay her living expenses, and she expected to go into government service. “It’s kind of scary,” she said. “What if I follow this low-paid path and end up kind of screwed?”

While a federal public service loan forgiveness program exists, questions continue to swirl about eligibility and whether the government will hold up its end of the bargain. Under the Warren plan, federal debt would be cleared “automatically” using available data about income and outstanding debt, meaning borrowers would not have to apply. Eligible private debt would be bought out and canceled by the government.

Supporters of Warren’s plan said it would help people in jobs that require high levels of education but do not command top salaries, like teachers. Warren also presented the plan as a middle-class stimulus package that would put money back into the economy.

Paul Hankins, an English teacher in Sellersburg, Indiana, said that in the next couple of years, his two children would be going to college, and everyone in his family would end up with student debt.

Hankins, 49, returned to school at 30 to become a teacher. He and his wife, a nurse practitioner, had taken on loans willingly to do what they loved, he said, and still owe almost $40,000 combined.

But “it’s a bill that we pay every month,” he said. “And the way you pay them, they hang on for so long. You’re like, ‘Wait, when was the last time that I actually sat in a classroom when I was doing this?’ I could put more money into my classroom if I weren’t putting money back into my education.”

Some critics questioned the value of such a huge investment in tuition and loan cancellation, and whether bailing out people with college degrees was the best way to spend nearly half the proceeds of Warren’s proposed wealth tax, which she estimates would bring in $2.75 trillion over 10 years. (Warren also proposes other uses for the increased tax revenue, like universal child care.)

“I think it’s a hard sell,” said Beth Akers, an economist and senior fellow at the Manhattan Institute, though she did give the Warren campaign credit for trying to make the plan progressive by tying it to income.

Others felt a one-time clearance of debt would not address the root causes of the nation’s student debt crisis. Matthew Chingos, director of the Center on Education Data and Policy at the Urban Institute, suggested that the plan was not forward-looking enough.

“The plan aims to wipe out a lot of debt, but that could end up being a bit of a Band-Aid, and we’d start marching back to where we are,” Chingos said.

Warren campaign officials argued that overall student debt would shrink because many students would opt for free public college. They added that competition would then drive down the price of private school tuition.

Luke Stuntz, an undergraduate student in environmental studies, was skeptical that people would flock to public colleges if they became tuition free. He said he had chosen to take out loans to go to NYU when he could have gone to a good state school in his home state of Massachusetts for much less.

“I kind of know what I’m getting into,” Stuntz, 19, said. “A lot of kids go into debt not knowing what they want to do.”

In a post on Medium announcing the plan Monday, Warren talked about how she, as an aspiring young teacher, had paid just $50 in tuition a semester at the University of Houston. “I could afford it on a part-time waitressing salary,” she said.

Those days, of course, are long gone. Over the past 20 years, average tuition and fees at private four-year colleges rose 58 percent, after accounting for inflation, while tuition at four-year public colleges increased even more, by more than 100 percent, according to research from the College Board.

Resentment over a potential windfall for others has played no small part in the debate over Warren’s plan. That millions of Americans, in one fell swoop, would be relieved of the punishing burdens that many have scrimped and saved for decades to pay off did not sit well with Warren’s critics.

In some ways, the drive for free tuition reflects the growing public anxiety about the value of college, said Akers of the Manhattan Institute.

“People are going to college without a lot of information about what their degrees are going to be worth,” she said. “Prices for college have to come more into line with the value they’re providing. That is the core issue these policymakers are trying to address.” 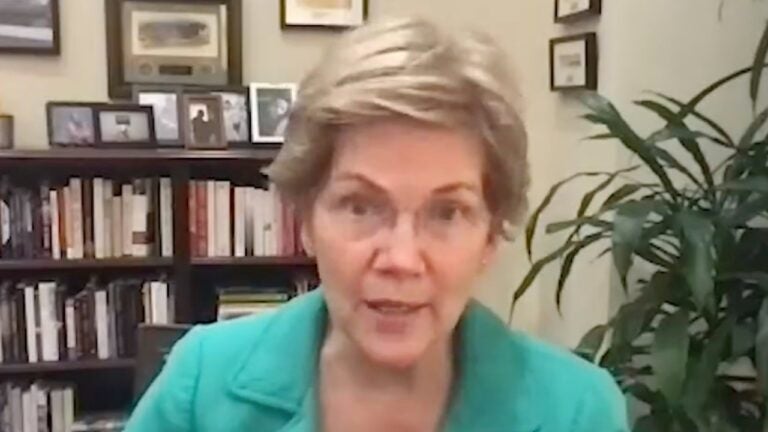