Six words – increasingly met with cheers on the campaign trail – have come to encapsulate Elizabeth Warren’s position as the leading ideas candidate in the crowded Democratic presidential primary: “I’ve got a plan for that.”

In town halls across the country, Warren has promoted her plans to offer Americans free college, universal child care, student debt cancellation and more – all paid for by raising taxes on the superwealthy.

Taken as a whole, the Massachusetts senator’s transformative slate of social programs and tax increases could amount to the largest transfer of wealth from the richest Americans to the middle class in U.S. history.

But Warren’s ambitious agenda relies on two assumptions that defy a long history of U.S. policymaking: First, that the country’s wealthiest taxpayers won’t find ways to evade the targeted tax hike she proposes, and second, that new entitlement programs won’t result in ballooning costs that plunge the federal government deeper into debt.

“She’s gone big. There’s nothing small about these proposals,” said Mark Zandi, who, as chief economist at Moody’s Analytics, has analyzed policies for Warren and other presidential candidates. “Will the wealthy do things that wealthy people can do to avoid paying the tax? That’s the real concern that I have. . . . A lot of other countries have tried this and backtracked because of tax avoidance issues.”

While other candidates have offered general platforms and principles, Warren has outpaced the field in outlining specific policies and detailing how she would pay for them. As her “I’ve-got-a-plan” mantra has caught fire with voters in recent weeks, her poll numbers have also risen, highlighting the hunger many Democratic primary voters have for fleshed-out policy prescriptions.

Since launching her presidential campaign, Warren has rolled out a domestic platform that, so far, her campaign estimates would cost a combined $3 trillion over 10 years – plans that include canceling student debt for almost every American, building 3 million affordable housing units, reducing rents by 10 percent nationwide, shrinking the black-white wealth gap by 4 percentage points, subsidizing child-care for all young families, offering universal prekindergarten, providing universal opioid treatment and eliminating the National Park Service’s maintenance backlog while making all national parks free.

The centerpiece of Warren’s agenda is a 2 percent annual tax on household assets above $50 million, hitting the wealthiest 0.1 percent of Americans. Underscoring the populist themes that drive her candidacy, Warren often spends several minutes describing the “wealth tax” before laying out her ideas for free college, child care and pre-K.

“Think about that. That’s how badly out of whack our economy has gotten – that two cents on the greatest fortunes in this country would yield an investment in every one of our kids across this country,” Warren said earlier this month at a Kermit, West Virginia, town hall on the opioid crisis. “I’m tired of freeloading billionaires.”

The crowd broke into cheers several times as Warren described how a 2 percent tax on “the diamonds, the yachts and the Rembrandts” of multimillionaires would pay for a host of new social programs – including a $100 billion plan to combat the opioid epidemic. But some economists are beginning to question the math behind Warren’s proposals.

Warren’s campaign claims that the wealth tax would raise $2.75 trillion over 10 years, enough to cover her spending plans with hundreds of billions of dollars to spare. She also has proposed a $1 trillion corporate tax on the most profitable companies.

In a Washington Post op-ed last month, former Obama administration economic adviser Lawrence Summers and University of Pennsylvania professor Natasha Sarin wrote “such a wealth tax will not yield the revenue that its proponents hope for,” citing figures from the current estate tax that show how the wealthy have proved adept in avoiding the 40 percent levy on their assets after death.

“The problem with their estimate is that they fail to engage with the fact that wealthy people do a lot of things that make it very hard to tax their estates, and will make it equally hard to tax their wealth,” said Sarin, who teaches finance at the Wharton School of Business.

A recent poll of about 40 top economists by the University of Chicago Booth School of Business found that 73 percent believed a wealth tax”would be much more difficult to enforce than existing federal taxes” because of tax evasion. Only 7 percent disagreed. Several cited the experience in Europe, where most countries have abandoned their wealth taxes in recent decades. Wealth taxes in the world’s richest nations have brought in far less revenue than expected due to tax avoidance, according to a 2018 report by the Organization for Economic Cooperation and Development.

Warren declined a request to comment. A campaign aide cited research by University of California at Berkeley professors Gabriel Zucman and Emmanuel Saez, who came up with the wealth tax proposal and calculated the revenue estimate.

In an interview, Zucman said Warren’s numbers are well-founded.

Zucman said Warren’s plan is specifically designed in a way that limits tax evasion – allowing no exemptions, increasing enforcement by the IRS and imposing heavy fines on people who try to skirt the tax by undervaluing assets, hiding their wealth abroad or renouncing their U.S. citizenship. The $2.75 trillion estimate includes an allowance for 15 percent tax avoidance, said Zucman, whose work with Saez on wealth concentration is respected by other economists.

“If it’s properly enforced and there’s a serious effort at having no exemptions and enforcing it strongly, then it can collect a lot of tax revenue,” he said of the wealth tax. “Tax avoidance, tax evasion – these are not things that happen out of the blue. The government chooses to make taxes work, to enforce them well, or to not enforce them properly.”

Elizabeth Warren waits to be introduced during a campaign stop at Fat Hill Brewing in Mason City, Iowa.

Even as economists debate the feasibility of an “ultra-millionaires tax,” Warren has found it to be an effective political weapon on the stump. She talks about taxing the “wealthiest 75,000 families in the country” to illustrate how the wealth gains in recent decades have disproportionately flowed to the top 1 percent.

Her plan offers an aggressive path to shrinking the wealth gap and has proved popular among broad swaths of the public.

A February Politico-Morning Consult poll found that 61 percent of voters supported the wealth tax, while only 20 percent oppose it. Among Republicans, 50 percent supported it and 30 percent were opposed.

And even if the wealth tax proves more complex in practice than in theory – it would certainly face legal challenges – voters give Warren credit for offering fresh ideas to address such major issues as income inequality. Many are seeking a contrast to President Donald Trump, who ascended to the presidency with a campaign heavy on slogans and light on policy details.

“They really have a good team,” said Zandi, who has worked with Warren’s aides to analyze plans for affordable housing and universal child care. “That’s why they’re coming out with the most in-depth proposals.”

Warren’s campaign has indicated that it will continue to roll out new policies. While Warren has voiced support for universal health care, paid sick leave and an expansive federal response to climate change, her campaign – like others – has yet to describe how those programs would be structured and funded.

Some of the plans Warren has described in detail would create massive new entitlements, with the risk of overshooting budget estimates.

Warren has promised that the government would pay all tuition and fees for students to attend public colleges. And she has proposed a universal child-care and pre-K program that would cap costs at 7 percent of family income. She also pledged to cancel student loan debt for 95 percent of borrowers who have it.

“College is a basic need that should be available for free to everyone who wants to go,” Warren wrote in a Medium post describing her plan.

Warren’s estimated cost for her college and student loan plan totaled more than $1.25 trillion over 10 years.

Sandy Baum, a higher education fellow at the Urban Institute, said costs for free two- and four-year college could quickly spiral beyond estimates.

Using the example of a student in Pennsylvania contemplating where to go to college, Baum said a free public college program might incentivize more students to take advantage of the government benefit, raising potential costs.

“Right now, you might decide ‘I’m not going to college in Pennsylvania. I’m going to go to a private college in Massachusetts,’ ” she said. “If it suddenly becomes free to go to Penn State, then that’s going to be a very different choice. And some of those students are definitely going to say ‘Penn State – it’s free.’ “

The Warren campaign did not provide an analysis of how it estimated the cost of its free-college program, which includes increasing Pell grants and creating a $50 billion fund for historically black colleges and universities and minority-serving institutions.

“It’s a lot of money,” said Baum. “If it accomplishes its goal of getting more people to go to college and stay there for a longer time, it’ll be more expensive.”

Warren’s child care and early education proposal is one of her most costly initiatives. Citing estimates from Moody’s, Warren’s campaign said providing free child care for families below 200 percent of the federal poverty line and subsidizing care for almost everyone else would cost about $1.1 trillion over 10 years. That total is reduced to $700 billion if you include the benefits of economic growth, the campaign said.

But Zandi, who wrote the Moody’s analysis for the campaign, acknowledged that the child-care program could ultimately be more expensive. One risk is that the free benefit could attract more users than forecast, driving up costs.

“It’s very possible the takeup could be more significant that what I’ve anticipated,” Zandi said, adding that there’s also a chance that economic growth could be greater than forecast, canceling out additional costs.

Warren’s conservative critics have chafed at her claim that such a major expansion of government benefits could be financed only by taxing the wealthy. Some also predict that higher taxes on the rich – quickly compounding at 2 percent annually – will have unintended consequences for the economy, shrinking growth.

“That’s one of the things about taxes – they change behavior,” said Michael Strain, an economist at the conservative-leaning American Enterprise Institute. “If you tax savings, you’ll get less savings. That will hurt investment, which will hurt productivity. And that will hurt wages.”

But Warren is banking on the idea that voters are ready to reject the kind of supply-side economics that have dominated much of U.S. policymaking for decades and embrace a new system aimed at reorienting the economy around the middle class.

During a campaign stop last week in Philadelphia, Warren talked about how working families had fallen further behind as politicians catered to millionaires and large corporations. Then she described her push to fundamentally restructure government with an expansive social program financed by a historic tax increase on the wealthy.

“We need to make not some nibbles around the edge, not like one statute over here and a regulation over there in a little piece. What we need is big structural change in this country,” she said to applause. “And I’ve got a plan for that. In fact, I’ve got multiple plans for that.” 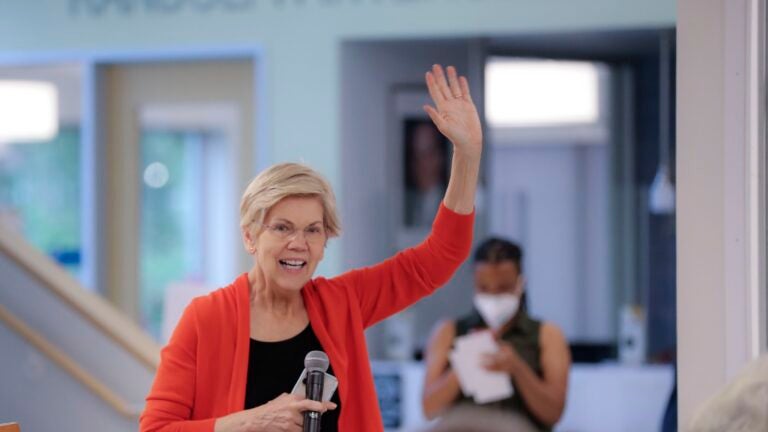