Sen. Elizabeth Warren might not currently be the frontrunner in the Democratic presidential primary. But her dog could very well be leading among his peers.

Bailey — the 1-year-old golden retriever (happy birthday, by the way) who Warren and her husband, Bruce Mann, adopted last summer — has become a fan favorite on the campaign trail. Warren often jokes that he has a separate photo line at her rallies — and that it gets more people than hers does. Photos of Bailey get thousands, if not tens of thousands, of likes on Twitter and Instagram — outperforming the vast majority of the Massachusetts senator’s more substantive tweets.

Bailey will be your valentine. pic.twitter.com/afYGEX2W7I

Named after the protagonist in the movie “It’s a Wonderful Life,” Bailey accompanied Warren outside her Cambridge house for her 2020 exploratory committee announcement and on stage at her first campaign stop in New Hampshire. The Warren campaign sells several Bailey-branded dog items, including a “Consumer Watchdog” collar. He’s even made an appearance in fundraising emails.

Bailey snoozed all the way home from New Hampshire — campaigning is tiring work for a dog! Check out his view from Saturday’s event in Manchester.

Bailey, of course, is far more than just an effective campaign surrogate.

“There’s something about a dog that just kinda grounds you in life,” Warren told CNN’s David Axelrod earlier this year.

Warren has credited her previous giant yellow companion, Otis, with helping her get through the daily annoyances of her early political career, as well as a personally difficult 2012 Senate race. Tragically, the 7-year-old golden retriever died of cancer less than a week before the election.

“When all the decisions and demands crowded in, Bruce and I would walk Otis around Fresh Pond,” Warren recalled last July. “If I really felt aggravated by some Republican attack, I’d brush Otis. And every evening, Bruce, Otis, and I would settle on the couch for an hour of television.”

Now, Bailey is filling that void. And even when Bailey isn’t stumping for Warren on the campaign trail, Mann says he sends her an email every morning with a photo of their fluffy pooch.

“There’s a lot of pain and chaos in the world right now — we decided to bring a little gentleness and normalcy into our lives,” Warren said in July.

Given her busy Senate and campaign schedule, she said it “made no sense” for her and Mann to get a puppy. But maybe it did.

Warren isn’t alone. There are nearly two-dozen other candidates competing in the grueling Democratic primary race. Most of them have furry supporters back at home.

And even when they’re bad, they’re all still very good.

The Colorado senator’s dog, Pepper, was the result of a 2010 campaign promise Bennet made to his three daughters, according to The Denver Post. He was reportedly adopted from a Colorado prison program that saves and trains rescue dogs.

Happy #NationalPuppyDay to Pepper, our family dog. Who knows the story behind why we got him? pic.twitter.com/EJ5uasUZnT

Biden was two German shepherds: Champ, who the former vice president adopted shortly after the 2008 election, and Major, who he adopted from the Delaware Human Association last November, after months of fostering the puppy. According to The News Journal, Biden got Major in part to be a companion for the aging Champ.

In addition to his duties “taking care of Champ,” Major has proved to be very photogenic.

Buttigieg’s husband isn’t the only one popular on social media. The South Bend, Indiana, mayor also has two rescue dogs. In 2017, the couple adopted a beagle-Labrador mix named Truman, whose Instagram account chronicles his adventures around the many parks and couches of South Bend.

what? its snuggle time.

“He was kind of hard to resist,” Buttigieg wrote at the time.

We were told that Buddy might be a challenge. Especially in a home with another dog. They were right… as you can see here, he is very demanding (of scratches). pic.twitter.com/vfMqhAVQVq

Happy Mother’s Day to my amazing, beautiful, and intelligent wife @amcclaindelaney who is just the BEST mother to our girls – Summer, Brooke, Lily and Grace – and an inspiring role model for them in every way. We are all blessed to have you in our lives. Love you. Xoxo.

The Gillibrand family welcomed their newest member, Maple, in 2017 — and the labradoodle may be the only potential first dog who has shown the ability to finish an alley-oop.

Sometimes you need a moment to step back and take joy in the little things. Watch Maple make the shot! pic.twitter.com/IqzP4hMOBN

Maple has apparently also taken to her work home. According to Glamour, Gillibrand’s staffers in Washington, D.C., jokingly refer to Maple as “the office therapy dog.”

Gravel, the 89-year-old former Alaska senator running for president, had a dog named Ginger as of his previous White House bid in 2008. More recently, his campaign’s Twitter account has confirmed that Gravel has a “very old” dog. However, it’s unclear is that dog is Ginger or a different dog. Gravel’s campaign did not respond to a question about the matter.

During Hickenlooper’s time as Colorado’s governor, his dog Skye was a frequent presence in his office — even during important legislative matters.

Skye kept a watchful eye to insure our Long Bill was signed in the most timely & efficient manner. #StateOfCO #coleg pic.twitter.com/5DjVwaBvtz

The Akita-bulldog-chow chow mix was trained in the same Colorado prison program as Bennet’s dog, Pepper, according to The New Yorker. Hickenlooper says the program had a big impact on Skye’s obedience — even if it apparently did not cover sitting still for fundraising videos.

Skye and I haven’t yet figured out how to master videos on the first take. While we work on that, we’d love for you to join us on this adventure.

The former Texas congressman’s black lab, Artemis, may be the only dog in the race who’s made an appearance on the cover of Vanity Fair. Her presence throughout the glossy magazine profile spurred a number of online fans and blog posts. And despite being wrongfully accused earlier this spring, Artemis thankfully did not eat the family’s turtle.

O’Rourke does have another black lab named Rosie (who was reportedly originally named Roosevelt, before they realized she was a girl), but it seems that Artemis, like her companion, is the one that strives for the limelight.

Kids and I agree that Artemis is best in show. #NationalDogShow pic.twitter.com/LahNLojca0

The Ohio congressman’s family adopted two lab-mix rescue dogs from a local shelter in 2013, despite their original intention to only come home with one, according to Quartz. Bear and Buckeye, two littermates, show up often on Ryan’s social media accounts, usually on his couch. That said, Buckeye appears to be a pretty impressive climber.

Today is #NationalDogRescueDay! We adopted Bear & Buckeye from a shelter in Struthers, OH. We couldn’t imagine our lives without them. They complete the Ryan family.

If you’re looking to add one to your family, I encourage you to visit a local shelter & adopt a rescue dog. pic.twitter.com/Zs38rPAhnF

The bad news: The California congressman says he is “dismayed” by the perceived lack of coverage for his extremely camera-ready dog, Penny, despite his often-pun-filled posts with photos of the black lab.

The good news: Swalwell says he won’t stop posting pictures of Penny until she gets the attention she deserves.

I have been dismayed that many of the articles discussing candidates’ dogs have not used an image of our Penny. Hopefully this photo will turn the tide…

I won’t give up until Penny gets the attention she deserves, so please stand by for more pup pics. pic.twitter.com/pP7R9s8V1E

The rest of the field

Of course, having a dog isn’t a requirement to run for president (even if some think it should be).

Cory Booker, for example, doesn’t have a dog — at least, not yet.

During a campaign event in Iowa this past February, the New Jersey senator was asked by an 11-year-old and said he traveled too much to have a dog. However, Booker — who helped save several pups during his time as Newark mayor — asked the boy if he would help him get a dog if he becomes president. According to The Des Moines Register, Booker’s campaign even took the boy’s name and phone number so they could check back in with him if that time ever comes.

Sens. Kamala Harris and Amy Klobuchar do not have dogs, though they both appear to be general fans. As of last year, Harris’s Senate office even had its own adorable (and at times festive) mascot.

Jay Inslee doesn’t himself own a dog, but claims two “grand dogs” named Pepper and Tilly.

Pepper and Tilly are standing as guard dogs over the values of democracy in our nation this 4th of July. Arf. #HappyIndependenceDay

The Washington governor also once named a setter-spaniel mix “Washingtonian of the Year” after the dog (also named Tillie) watched over a fellow pooch that got stuck in a old cistern in the woods and actually helped attract attention to the situation by running out and barking at a nearby homeowner before running back into the woods. Seriously, it’s an incredible story that sounds like something out of “Lassie.”

Andrew Yang, the tech entrepreneur running on the idea of universal income, has mentioned having a dog in the past (“The first thing I do when I wake up in the morning is push my dog off of me.”) However, no such pup of his own has yet made an appearance on the campaign trail.

On April Fools’ Day this year, Yang did introduce a satirical policy proposal, parodying his Freedom Dividend idea, to give every American 1,000 dogs a month.

“These health benefits are possible with just one dog; imagine the stress-reducing benefits of owning 12,000 dogs,” reads the webpage for the proposal, which includes a tennis ball tax credit and a new 28th Amendment: “The Right to Bear Dogs.”

Sen. Bernie Sanders, meanwhile, has no time for jokes or talk of doggos.

“People don’t need to know what I buy in the grocery store or what the name of my dog is — I don’t own a dog, by the way — but they do need to know why billionaires are getting richer and the poor are getting poorer,” Sanders told The New York Times in 2015 during his first presidential campaign. 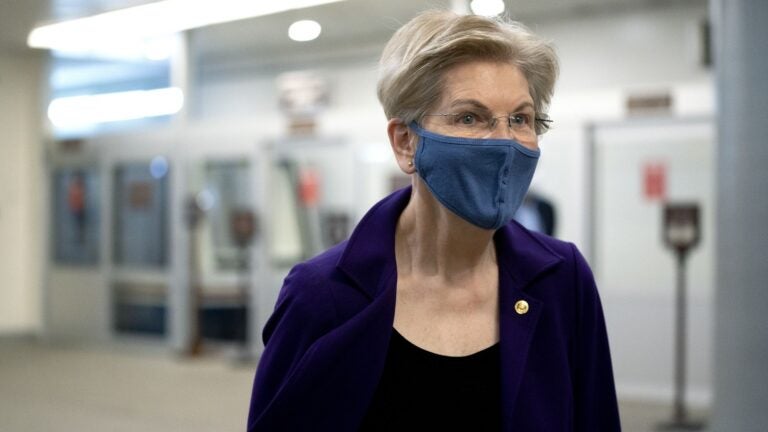