“I disagree strongly with many of the views and comments of some of the far-left members of the House Democratic Caucus — especially when it comes to their views on socialism, their anti-Semitic rhetoric, and their negative comments about law enforcement — but the President’s tweet that some Members of Congress should go back to the ‘places from which they came’ was way over the line, and he should take that down,” Collins said.

But some lawmakers were quick to call out the Maine Republican for her own words.

“You should be able to condemn racism without a caveat,” Democratic U.S. Rep. Joe Kennedy III tweeted.

You should be able to condemn racism without a caveat. https://t.co/YP4PU9koQG

On Sunday, Trump tweeted that four liberal congresswomen of color should go back to the “totally broken and crime infested places from which they came,” adding that, “These places need your help badly, you can’t leave fast enough.”

Trump defended his words Monday, saying, “Many people agree with me.”

While the president didn’t name names, he was almost certainly referring to the tight-knit group of freshman congresswomen that includes Reps. Ayanna Pressley, Alexandria Ocasio-Cortez of New York, Ilhan Omar of Minnesota, and Rashida Tlaib of Michigan.

Omar, who is from Somalia, is the only one of the lawmakers who is foreign-born. All four are American citizens.

“I’m just spitballing here, but maybe don’t use half of your statement to condemn the victims of racism rather than the racist,” Rep. Seth Moulton tweeted in response to Collins’s remarks.

I’m just spitballing here, but maybe don’t use half of your statement to condemn the victims of racism rather than the racist. https://t.co/Z1T4WrnyUw 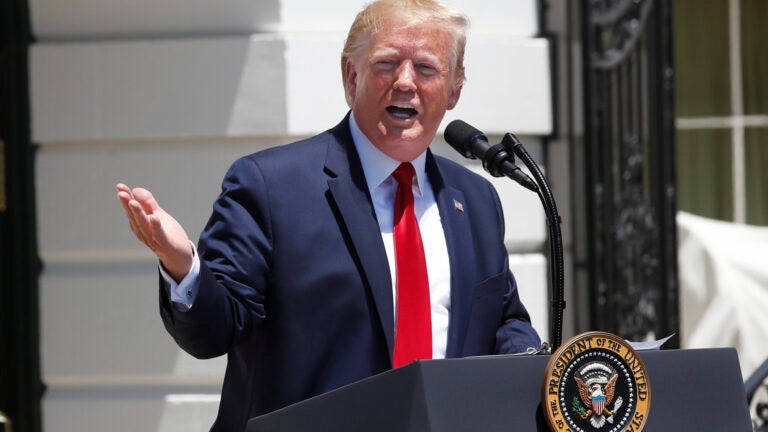 Trump steps up attack on minority congresswomen, saying they ‘hate our country’