A third Democrat is jumping into the 2020 primary race for Sen. Ed Markey’s seat.

Steve Pemberton, a New Bedford-raised businessman and author, announced his U.S. Senate candidacy Tuesday morning, joining Brookline labor lawyer Shannon Liss-Riordan in what has become a two-front campaign for Markey, the 72-year-old junior Massachusetts senator. Pemberton says he is running to be a “passionate advocate for the unseen” amid a time of “fierce urgency.”

“We deserve leaders who understand the human toll of failed policies and the cost of willful indifference inflicted upon our working families and our most vulnerable citizens,” he tweeted Tuesday morning. “I understand these threats because I have lived them, stared them down, and overcome them.”

We deserve leaders who understand the human toll of failed policies and the cost of willful indifference inflicted upon our working families and our most vulnerable citizens. I understand these threats because I have lived them, stared them down, and overcome them.

The son of mixed-race parents, the 51-year-old survived a violent and turbulent childhood in foster care after being separated from his biological parents at the age of 3. However, Pemberton’s campaign says his fellow South Coast community members “helped him turn tragedy into triumph.” He went on to graduate from Boston College in 1989 and has served as an executive for Walgreens, Monster.com, and the Framingham-based Workhuman, where he currently is the chief human resources officer.

Pemberton has also become a paid speaker, and his autobiographical book, “A Chance in the World,” was even made into a movie. In 2015, he was appointed by President Barack Obama’s labor secretary, Tom Perez, to a federal advisory committee on improving employment participation among people with disabilities.

In an announcement video, Pemberton noted that only eight African-Americans have been elected to the U.S. Senate, suggesting that — like Rep. Ayanna Pressley, who unseated then-Rep. Mike Capuano in a historic primary race last year — he would bring a new perspective to the job, even if he doesn’t have stark policy disagreements with Markey.

“I don’t see this race as a choice between me and Ed Markey,” Pemberton said. “His legacy and his commitment is an honorable one and has been an important one. At the same time that, here in Massachusetts, we are aware, of the time for a new generation and new voices who come with a very different set of expectations and, in my case, a different set of life experiences.”

Pemberton says his campaign will focus on income inequality, student loan debt, and “access to quality health care.” According to Politico, Pemberton has not gone so far to express support for progressive policy proposals like Medicare for All or the Green New Deal, both which Markey supports (the Bay State senator even co-authored the climate change-focused resolution with New York Rep. Alexandria Ocasio-Cortez).

Similar to Liss-Riordan, Pemberton differs with Markey on the question of impeaching President Donald Trump; according to Politico, he thinks the president is “unfit for office” and should be impeached. Markey has said that the “evidence is piling up” against Trump, but hasn’t called for Congress to begin impeachment proceedings.

Pemberton first revealed that he was exploring a Senate run in an interview with The Boston Globe last month and hinted at a campaign that would focus on Massachusetts residents “outside the bubble that Boston can be.”

After several years living in Chicago, Pemberton bought a house in Framingham this past May, according to the Globe. He had previously lived in the MetroWest city until 2011 when his family moved to the Midwest; his campaign says his two youngest children “will be remaining in their current high schools in Illinois.”

Faced with specter of potential primary challenges, Markey has maintained that he will run on his record and continue to work on issues of concern to Massachusetts residents. The Malden native was first elected to the House of Representatives in 1976; he won his Senate seat in a 2013 special election after Sen. John Kerry was appointed to become secretary of state. 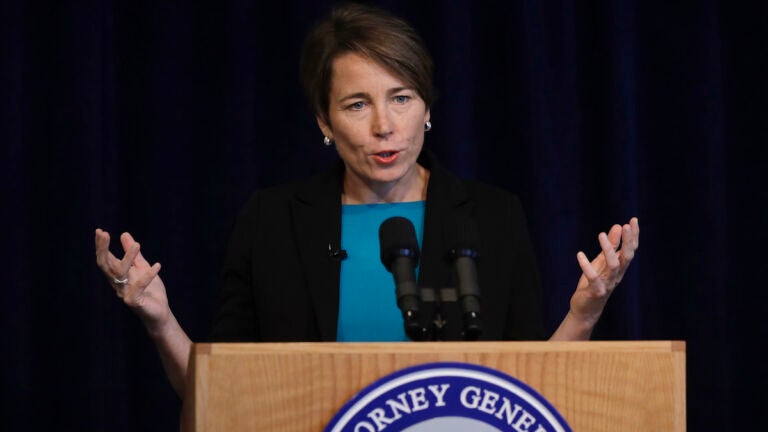