It’s not true. And that’s apparently the point.

This week, Sen. Elizabeth Warren’s presidential campaign began running Facebook ads with the deliberately false statement that the company’s and CEO had endorsed Trump in the 2020 election in an effort to draw attention to the social media platform’s advertising guidelines. The move comes after Facebook and other online platforms refused to remove Trump campaign ads containing baseless claims about fellow 2020 contender and former vice president Joe Biden.

“Facebook holds incredible power to affect elections and our national debate,” Warren tweeted Saturday. “They’ve decided to let political figures lie to you—even about Facebook itself—while their executives and their investors get even richer off the ads containing these lies.”

Facebook holds incredible power to affect elections and our national debate. They’ve decided to let political figures lie to you—even about Facebook itself—while their executives and their investors get even richer off the ads containing these lies.

Warren says her campaign created the intentionally false ad to test the company’s platform and that it “got approved quickly.” According to Facebook’s ad library, the first paid post went up Thursday and more than a dozen identical ones followed Friday, each garnering tens of thousands of impressions.

“You’re probably shocked, and you might be thinking, ‘How could this possibly be true?'” Warren’s campaign says in the ad, referring to the false claim that Zuckerberg had endorsed Trump.

“Well, it’s not. (Sorry.) But what Zuckerberg *has* done is given Donald Trump free rein to lie on his platform — and then to pay Facebook gobs of money to push out their lies to American voters,” the post continues. “If Trump tries to lie in a TV ad, most networks will refuse to air it. But Facebook just cashes Trump’s checks.”

On Twitter, Warren accused Facebook of abdicating any responsibility to battle misinformation in the interest of profit.

In the wake of recent elections, Facebook has launched a fact-checking effort aimed at demoting inaccurate stories and third-party content in its News Feed. However, the initiative does not extend to political advertising done directly by candidates, even if the ads are false or misleading. Under the First Amendment, political speech is one of the most constitutionally protected forms of expression.

“Facebook believes political speech should be protected,” Andy Stone, a Facebook spokesperson, told Boston.com in a statement. “If Senator Warren wants to say things she knows to be untrue, we believe Facebook should not be in the position of censoring that speech.”

CNN recently refused to run two Trump ads with demonstrable inaccuracies, though most national media outlets and platforms did not ban them (the ads, which accuse Biden and his son of corruption in Ukraine, are also running on local TV stations in early primary states). Facebook says it “not our role to intervene when politicians speak,” according to Nick Clegg, the company’s vice president of global affairs and communications.

“We do not submit speech by politicians to our independent fact-checkers, and we generally allow it on the platform even when it would otherwise breach our normal content rules,” Clegg said in a speech last month.

Unless the speech “endangers” people, Clegg says it would be inappropriate for such a powerful private company to “become a self-appointed referee” for political speech. Facebook formally put the policy in place last September, ahead of the 2018 midterm elections.

Warren has previously criticized the amount of power Facebook has to influence the democratic process and says she would try to break up the company and other tech giants if elected president. In a recent Facebook meeting, Zuckerberg said he would fight such an “existential” threat.

In March, Facebook briefly removed a Warren campaign ad calling for the breakup of Facebook, which the company said violated an ad policy against using its corporate logo. At the time, Warren said the episode illustrated that Facebook has too much power over the social media marketplace. She reiterated that point Saturday, following her campaign’s own false ad experiment.

“Facebook changed their ads policy to allow politicians to run ads with known lies—explicitly turning the platform into a disinformation-for-profit machine,” she wrote on Twitter. “This week, we decided to see just how far it goes.” 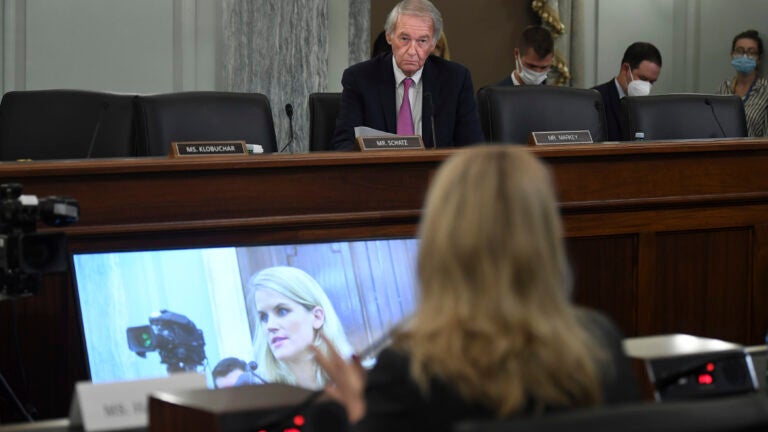