President Donald Trump’s official, if not unsurprising, announcement to withdraw the United States from the Paris climate agreement is being condemned by Massachusetts Democrats as a “reckless” abdication of the country’s global leadership.

More than two years after Trump first announced his intentions to pull out from the international emissions-reduction deal, the administration notified the United Nations that it was formally beginning the withdrawal process on Monday, the earliest day it was allowed to do so.

The decision was swiftly criticized by local officials. Boston Mayor Marty Walsh reiterated his pledge to hold his city to the Paris agreement, even if the decision to withdraw at the national level “puts future generations at risk.”

“Boston will not stand by as our federal government fails to act,” Walsh tweeted.

Withdrawing from the #ParisAgreement puts future generations at risk. Boston will not stand by as our federal government fails to act. As Mayor, I will continue to work to uphold the tenets of the Paris Agreement and protect Boston against the very real impacts of climate change.

The voluntary climate accord — signed by nearly 200 countries — established individual goals for each country to reduce their greenhouse gas emissions, with the central goal of keeping the increase in global temperatures this century “well below” 2 degrees Celsius. Scientists say that degree of warming will still result in significant negative effects, but will be less devastating than if temperatures continue to increase at their current projections.

Decommitting from the country’s goal of lowering emissions by 26 to 28 percent from its 2005 levels by 2025, Secretary of State Mike Pompeo said in a statement Monday the United States will take a “realistic and pragmatic” market-driven approach toward addressing climate change.

Sen. Elizabeth Warren accused the Trump administration Tuesday of “ceding American leadership and giving away American jobs in the clean energy economy of the future” through its decision.

By leaving the Paris Climate Agreement, Trump is ceding American leadership and giving away American jobs in the clean energy economy of the future. We should be leading the fight to end the climate crisis—and I’ve got a plan for that. https://t.co/ILEBmxsiCL

The United States’ withdrawal from the agreement does not become official for exactly one year, meaning the day after the 2020 election. And if Trump is not re-elected, the country’s next president can rejoin the deal in 30 days, which Warren says she intends to do.

In an opinion piece Tuesday for The Guardian, the Massachusetts senator and Democratic presidential candidate said that rejoining the Paris agreement “is not enough.”

Warren, who has released a number of climate change-related plans, said the United States must increase its emissions-reduction goals (which lag behind the country’s European peers) to “achieve domestic net-zero emissions by 2030.” She also wrote that the United States must “encourage nations like China and India to step up in this fight alongside us.”

However, the decision to withdraw from the Paris agreement amounted to “yet another reckless choice” by Trump that puts lives at risk and walks away from trillions of dollars of potential economic opportunity in the energy sector, Warren wrote:

We are already seeing the cost of inaction here at home – bigger wildfires in California, record flooding in the Midwest and stronger hurricanes from Houston to New Orleans. And the global costs are even greater: climate change is making already unstable governments even less so, fueling international conflicts, and creating climate refugees around the world. It’s also spreading diseases into new parts of the world, costing more lives. With each passing year, the climate crisis wreaks greater havoc.

But instead of acting to protect American lives and creating good paying jobs, we have let Big Oil set our climate policy in Washington. These companies spent three decades deceiving the public about the climate crisis, spreading lies and misinformation through their lobbyists. With Donald Trump in the White House, they now have a climate denier in chief.

Sen. Ed Markey, a co-author of the Green New Deal, tweeted Monday that Trump was “turning his back on future generations who will have to survive the most catastrophic impacts of climate change.”

By withdrawing from the Paris agreement, President Trump is not only going against the will of the majority of the American people who support action, he also is turning his back on future generations who will have to survive the most catastrophic impacts of climate change. https://t.co/wrlwp8ZX4T

Massachusetts Attorney General Maura Healey echoed the sentiment, accusing the president of “ignoring the pleas” of a range of stakeholders.

Our climate is in crisis. Rather than lead, the President is abandoning the Paris Agreement, ignoring the pleas of business leaders, global allies & the American people.

I am committed to fighting this Administration’s anti-science, climate-denying, fossil fuel-funded agenda.

Several members of the Bay State’s congressional delegation also ripped the decision. Rep. Joe Kennedy III asserted that Trump was signaling his administration’s belief that “we are too weak to confront a generational threat.”

Withdrawing from the #ParisAgreement signals to the world the Trump Admin believes we are too weak to confront a generational threat. We can’t combat climate change and save our environment & earth if we turn our back on the American and international communities under siege.

Rep. Seth Moulton tweeted that the Paris agreement should be called “the Boston Accord or the New York Accord,” because of the country’s responsibility to convene international leaders to fight climate change.

“We need to think big and in new ways about renewables and nuclear,” Moulton wrote, adding the country should create a “Green Corps” civil service program.

America never retreats from big challenges, we take them on. I signed the Green New Deal to shape the way forward. We need to think big and in new ways about renewables and nuclear. We should also create a civilian national service program-a green corps-that unites the country. 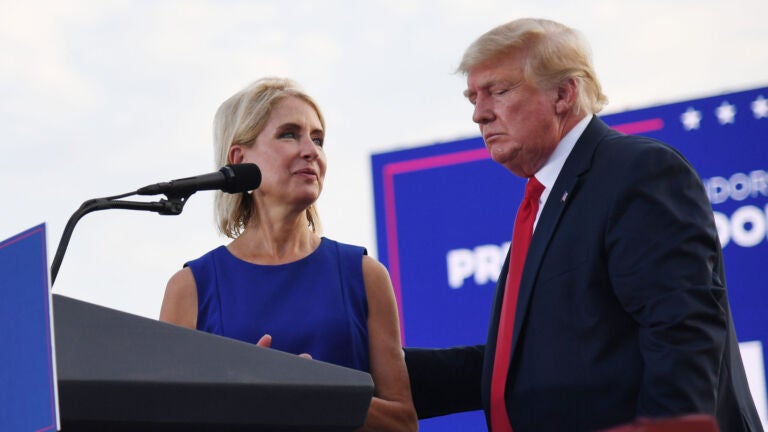