Rep. Joe Kennedy III has agreed to a People’s Pledge in his primary campaign against Sen. Ed Markey — but not with Markey himself.

Kennedy and Shannon Liss-Riordan — the first Democrat to announce a 2020 primary challenge against the incumbent Massachusetts senator — came together Monday to sign the agreement aimed at restricting third-party (or, technically, fourth-party) spending in the three-way Senate primary race.

Designed to combat the influence of limitless spending by groups that do not disclose their donors, the then-groundbreaking pact was first championed by Sen. Elizabeth Warren and Scott Brown during their 2012 race. Kennedy proposed a similar version for the 2020 primary race in September, which he says is a step toward addressing a “broken campaign finance system that has literally flooded our democracy with dollars.”

“The People’s Pledge is our chance to lead by example once again in Massachusetts,” the congressman said during a signing ceremony Monday afternoon at Liss-Riordan’s campaign office in Boston.

Markey, who appears poised to benefit the most from third-party spending in the 2020 race, was conspicuously absent from the event. All three candidates had been working toward a deal to which all sides could agree, but the Kennedy and Liss-Riordan campaigns said in a statement Sunday that they lost patience with Markey.

“After multiple attempts to include the Markey campaign in a signing ceremony, including a last minute cancellation of an event early last month, the two campaigns decided to move forward and put the onus on the Markey campaign to sign the pledge in the coming days,” their statement said.

The pledge signed Monday says that if any outside group runs TV, radio, digital or direct mail advertising in the race, the candidate who benefits has to donate half of the ad’s cost to a charity of the other two opponents’ choosing. The agreement would mean virtually all spending in the race would come directly from the campaigns, which must disclose their donors and are subject to individual contribution limits.

However, the pledge only takes effect if Markey also signs on. And while Kennedy and Liss-Riordan expressed hope Monday that he would, Markey campaign director John Walsh told Boston.com Monday that they’re “not interested” in the pledge currently being put forward.

Instead, the senator is proposing a more limited People’s Pledge that aims to only restrict negative advertising by third-party groups.

“We need an updated People’s Pledge for the 2020 Senate primary to end the influence of negative third-party advertising and undisclosed money that is polluting American elections,” Markey said in a statement Monday, adding that “progressive organizations have the right to make their voices heard in this critical election with positive campaign advertising.”

His proposal would permit “positive” advertising from outside groups only if they disclose their donors. If all three campaigns agreed that an ad violated the pledge, the candidates would condemn the outside spending in a joint press conference, Markey’s campaign said.

During his first Senate race in 2013, the Malden native was an outspoken supporter of a People’s Pledge banning all outside spending — signing one such agreement in the Democratic primary at the time before pressuring his Republican opponent to agree to one in the general election.

However, this time around, Markey stands to benefit from outside spending, even if it isn’t from the sort of corporate interests typically denounced by progressive Democrats. Environmental groups have said they plan to spend $5 million to support the Green New Deal co-author’s re-election, and the Democratic Senatorial Campaign Committee has also signaled it would provide financial help.

Markey’s primary opponents raised questions Monday about his apparent shift. Speaking to reporters at the signing ceremony, Kennedy noted that their pledge is “almost identical” to the 2013 pledge signed by Markey and Rep. Stephen Lynch.

Noting that Markey had described outside money as “political pollution,” Liss-Riordan told Boston.com in a statement that she was eager to hear why the senator “had a sudden change of heart.”

“I believe all outside money should be kept out of our politics and out of this race for U.S. Senate,” the Brookline labor attorney said. “I am running to give a voice to the working people of Massachusetts, a voice that is too often silenced by powerful special interests who spend millions to swing elections their way. Frankly I was surprised to see Senator Markey’s proposal that would actually take us backwards, and allow unlimited special interest dollars to infiltrate this race.”

Markey’s campaign argues their proposal does the opposite, updating the People’s Pledge for a political climate of escalating negativity following President Donald Trump’s election.

Walsh said it would be “unwise to silence and muzzle” progressive groups, as long as their promoting positive messages about their candidates. The former Massachusetts Democratic Party chair, who supported People’s Pledges in 2012 and 2013, contended that reducing negative ads was a “principle focus” of past agreements (though some argue the Pledge’s Pledge actually contributed to the nastiness of the Warren-Brown race). Walsh added that all three Senate candidates had “earned” the support of their respective backers, whether it be environmental groups or various unions — the latter of which have lined up behind each of the three candidates.

Asked about the Markey campaign’s argument, Kennedy told reporters that allowing only positive messaging would be “a loophole big enough to drive a truck through.” But more fundamentally, he suggested that supporting carveouts for Democrat-aligned groups undermines the party’s authority on campaign finance reform.

Patrick Burgwinkle, a spokesman for End Citizens United, a group that advocates for reducing the role of money in politics, agreed that a People’s Pledge banning all outside spending — as opposed to just negative messaging — would be the “best way to ensure that every candidate runs a grassroots race and makes their case directly to voters across the Commonwealth.”

“When candidates run grassroots campaigns powered by small donors, we get a government that is more accountable to the people,” Burgwinkle said. 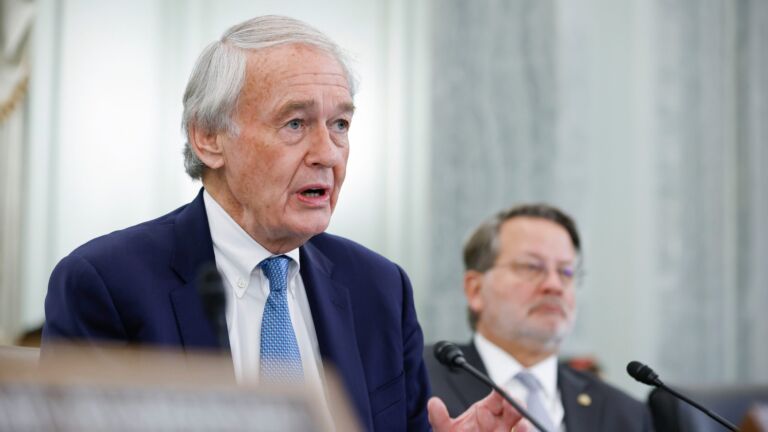 Mass. gun laws 'help save lives.' Sen. Ed Markey is -- again -- making the case for the rest of the U.S. to follow suit.