Sen. Elizabeth Warren of Massachusetts raised $21.2 million for her presidential campaign in the fourth quarter of 2019, her team announced on Friday, a slight dip from the previous quarter and behind three of her top rivals for the Democratic nomination.

The total raised by Warren in the final three months of the year was lower than the $24.6 million she raised from July to September. Last week, her campaign had signaled her lagging fundraising effort for the quarter, which echoed her slip in the polls over the same period. Days before the end the year, her campaign took the unusual step of going public with its financial performance, announcing that it had raised just over $17 million and conceding that “it will be nearly impossible to match last quarter at this point.”

That turned out to be right. But her campaign said the announcement also helped spur her best end-of-quarter run of donations in all of 2019 — more than $4 million in five days — and her best fundraising day of the campaign, when she brought in $1.5 million on Dec. 31.

Overall, Warren’s money came from nearly 900,000 contributions in the quarter, with an average donation of about $23, demonstrating her potent grassroots support.

Still, her $21.2 million haul was significantly behind the $34.5 million that Sen. Bernie Sanders of Vermont, her leading rival on the left, has reported raising. She also trails the $24.7 million collected by Pete Buttigieg, the former mayor of South Bend, Indiana, and the $22.7 million raised by former Vice President Joe Biden. Those three opponents all reported raising more money in the fourth quarter than they had in the third.

Like Sanders, Warren is relying on grassroots donors to finance her campaign. Neither Warren nor Sanders is holding high-dollar fundraising events with wealthy contributors, a contrast with Biden and Buttigieg. Two other candidates, Michael Bloomberg and Tom Steyer, are billionaires using their personal fortunes to fund their efforts.

Warren has made that contrast a major point of emphasis on the campaign trail in recent weeks, and at the most recent debate in December.

She reiterated her message at a town-hall-style event in New Hampshire on Thursday. “Our democracy really is on the line,” she said, “and if the only way you can become the Democratic nominee is to be a billionaire or suck up to the billionaires, then look out, America.”

All told, Warren raised $71 million in 2019 from nearly one million people making more than 2.7 million donations, her campaign said Friday.

When Warren began her presidential bid a year ago, her fundraising got off to a slow start. But as the year went on and she gained steam in the primary race, propelled by her seemingly endless stream of policy plans, her grassroots fundraising strategy appeared to be paying off. She raised more money in the third quarter than anyone aside from Sanders, and her fundraising had grown in each quarter of the year.

Her dip in the fourth quarter — in both fundraising and polling — came as some of her Democratic rivals attacked her over the critical issue of health care. Warren had aligned herself with Sanders in support of a “Medicare for all” single-payer health insurance system, but she faced repeated questions over whether she would raise taxes on the middle class in order to pay for the system and came under sharp criticism at the October debate.

She later released a financing plan that would not raise taxes on the middle class, as well as a plan for transitioning to Medicare for all.

At the beginning of the fourth quarter, in October, national polling showed Warren as a front-runner in the Democratic race, along with Biden. She remains in the top tier of candidates, but currently trails both Biden and Sanders in national polling averages. 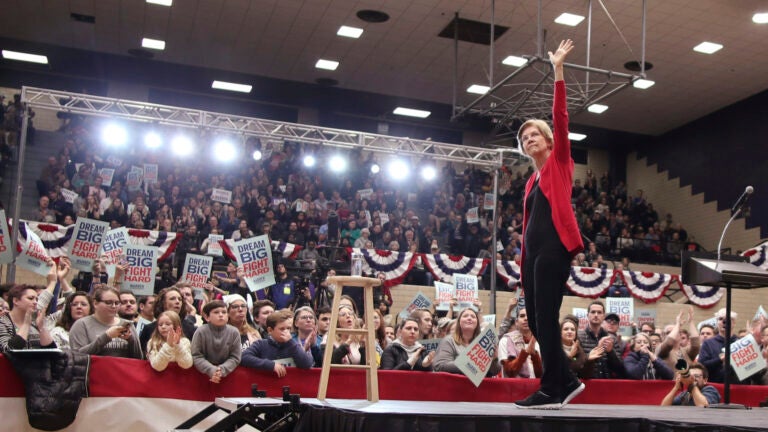