Sens. Bernie Sanders and Elizabeth Warren — two longtime friends and progressive allies in the 2020 race — appeared to have a tense on-stage exchange after the seventh Democratic debate Tuesday night.

“This is not warm and cuddly.”

CNN’s @DavidAxelrod reacts to a seemingly chilly interaction between Sens. Elizabeth Warren and Bernie Sanders just moments after the conclusion of the #DemDebate. https://t.co/E1MSK5ItS7 pic.twitter.com/4XQZHbHLj9

During the debate, Sanders and Warren gave conflicting accounts of a private meeting in 2018 that was thrust into the 2020 race this week. Warren says Sanders told her that he didn’t think a woman could win the presidency in 2020, which the Vermont senator denies. He did so again during the debate Tuesday.

“Anybody who knows me knows that it’s incomprehensible that I would think that a woman could not become president of the United States,” Sanders said.

Shortly after the event finished, the two progressives exchanged words behind the debate podiums, as other candidates shook hands. Sanders appeared to reach out to shake Warren’s hand, but was rebuffed by the Massachusetts senator.

After a few terse words, Sanders threw up his hands and walked away. 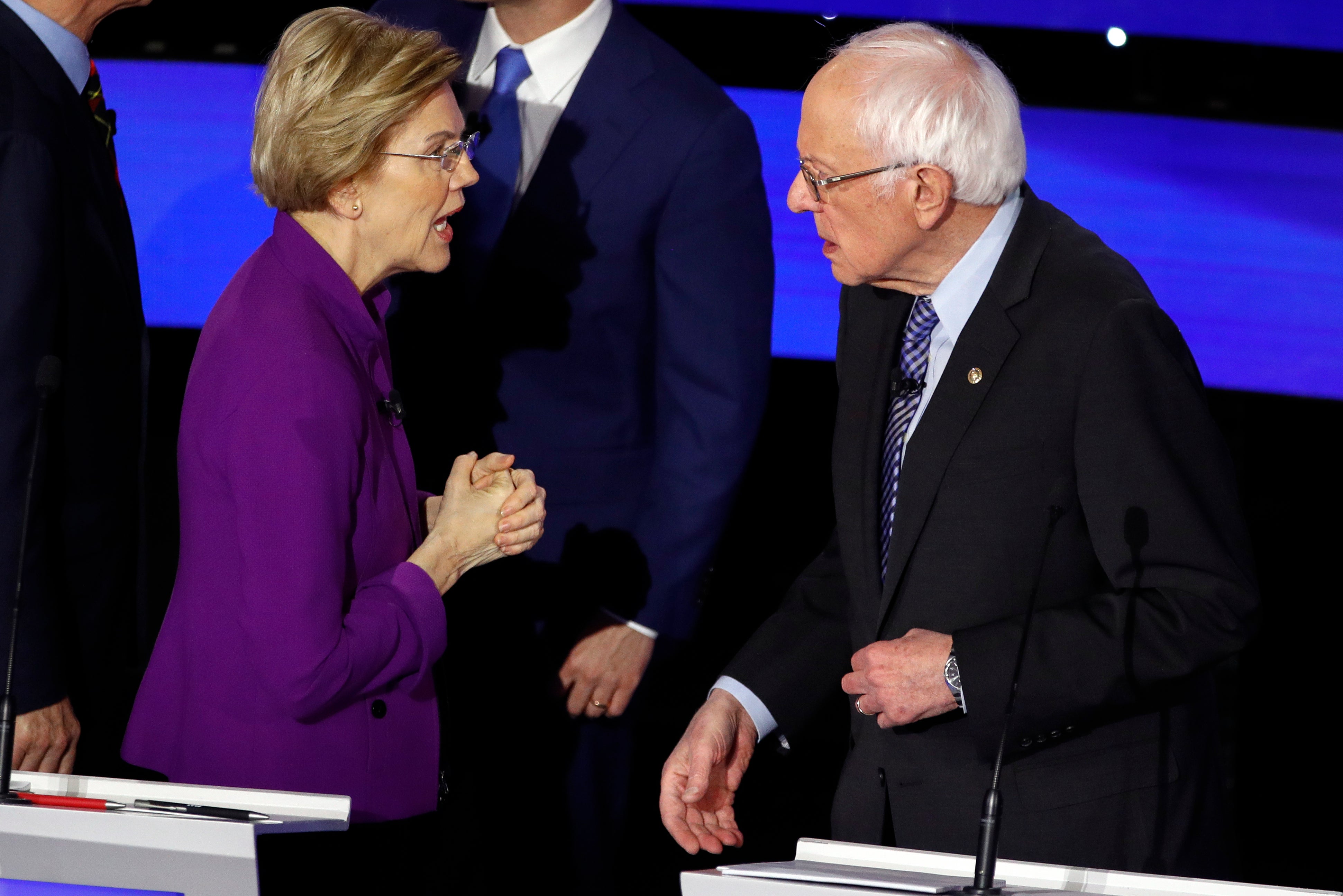 Warren and Sanders meet after the debate Tuesday night.

Tom Steyer, who unknowingly walked into the moment, told CNN after the debate that he didn’t hear what Sanders and Warren were saying to each other.

“It was one of those awkward moments where I felt like, you know, I need to move on as fast as possible,” Steyer said. “You could see it was an awkward moment. So my goal was simply to say goodnight to two people who I respect.”

The exchange comes as the so-called non-aggression pact between Sanders and Warren has increasingly begun to fray in the run-up to the Iowa caucuses next month. Polls show the two New England senators, who had defended each other in previous debates, among the top four candidate in the four early-voting states.

Before the differing accounts of their 2018 meeting emerged, Warren had told reporters this past weekend that she was “disappointed to hear that Bernie is sending his volunteers out to trash me,” after the Sanders campaign directed volunteers to tell voters that the Cambridge Democrat appealed more to “highly-educated, more affluent people” and would bring “no new bases into the Democratic Party.”

Sanders said he plans to vote against the proposed United States-Canada-Mexico Agreement, primarily objecting to the fact that it doesn’t mention climate change. Warren has said she’s trying to be practical about the deal and plans to vote yes on the USMCA as a “modest improvement” to get “some relief” to American farmers and workers.

BuzzFeed reported earlier Tuesday that Warren’s campaign had been trying to deescalate the feud, amid blowback from Sanders supporters. In her statement Monday, Warren noted that “Bernie and I have far more in common than our differences in punditry.”