And the Massachusetts senator didn’t budge from her account that he did.

Citing his record going back decades, Sanders called the notion he expressed such an idea “incomprehensible.”

“Well, as a matter of fact, I didn’t say it,” the Vermont senator said, when pressed on the subject by debate moderator and CNN reporter Abby Phillip.

“I don’t want to waste a whole lot of time on this, because this is what Donald Trump and, maybe, some of the media want,” he continued. “Anybody who knows me knows that it’s incomprehensible that I would think that a woman could not become president of the United States.”

Bernie Sanders denied having once told Elizabeth Warren that a woman couldn’t be elected president.

Sanders referred to the fact that there’s a video of him saying “a woman could be elected president of the United States” in 1988. Sanders said he even “deferred” to Warren during the previous presidential election cycle, waiting until she decided not to enter the race — despite efforts to draft her — before launching his own 2016 campaign.

“There was a movement to draft Senator Warren to run for president, and you know what? I stayed back,” Sanders said.

“How could anybody in a million years think that a woman could not become president of the United States?” he said. “And let me be very clear, if any of the women on this stage or any of the men on this stage win the nomination — I hope that’s not the case; I hope it’s me — but if they do, I will do everything in my power to make sure they are elected in order to defeat the most dangerous president in the history of our country.”

Asked again if he was saying he “never” told Warren that a woman couldn’t win the election, Sanders confirmed: “That is correct.”

CNN first reported earlier this week that Sanders told Warren that he didn’t think a woman could win the presidency during a 2018 meeting, during which the two ideological allies reportedly agreed they would likely both run in 2020. Sanders called the account “ludicrous” and his campaign manager, Faiz Shakir, said it was a “lie.”

But after the Sanders campaign’s pushback, Warren issued a statement Monday night that said Sanders “disagreed” with her belief that “a woman could win.” BuzzFeed reported Tuesday that Warren’s campaign has since tried to deescalate the rare rift between the two longtime friends.

Still, during the debate Tuesday, Warren stood by her characterization of the 2018 meeting.

“I disagreed,” she repeated during the debate, after Phillip asked what she thought when Sanders “told you a woman could not win the election,” somewhat disregarding Sanders’s answer just seconds earlier.

“Bernie is my friend and I am not here to fight with Bernie,” Warren said.

But she said the question had been “raised” — according to the Washington Post, it was Warren who brought up the question during the 2018 meeting with Sanders — and that it was time to “attack it head on.”

A report last June found that women (and people of color) win elections at equal rates as white men, though they remain underrepresented in government because white men are more likely to run for office.

While several studies have suggested that sexism did affect the outcome of the 2016 presidential election, Warren said the field of 2020 candidates told a different story. Only she and Minnesota Sen. Amy Klobuchar had never lost a political campaign.

“Can a woman beat Donald Trump?” she asked. “Look at the men on this stage. Collectively they have lost 10 elections. The only people on this stage who have won every election that they’ve been in are the women, Amy and me.” 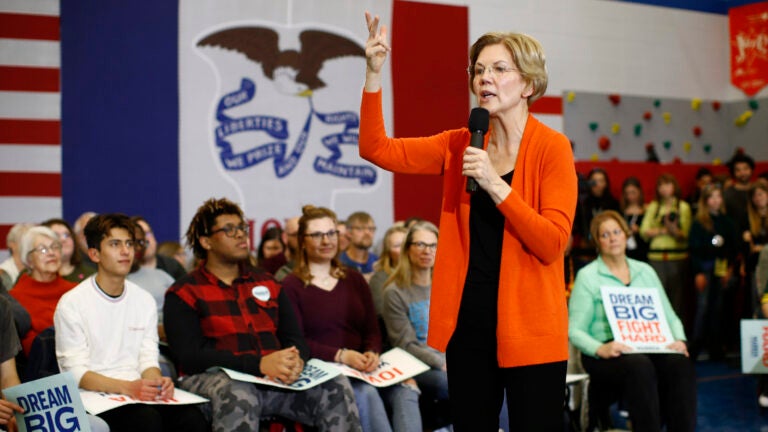