Sen. Elizabeth Warren may be trying to break the glass ceiling. However — at the risk of mixing architectural metaphors — the Massachusetts senator is also the Democratic presidential candidate with “the highest potential ceiling of support,” according to her campaign.

The memo was released publicly ahead of the results of the New Hampshire primary Tuesday night, in which Warren is expected to finish third at best, clustered with Sen. Amy Klobuchar and Joe Biden, behind the two frontrunners in the state, Sen. Bernie Sanders and Pete Buttigieg.

According to Lau, their campaign, which has more 1,000 staffers in 31 states, is still well positioned for Super Tuesday and beyond. In his memo, he laid out a detailed vision of Warren’s path forward in the more than 50 remaining nominating contests and — in a rare move for the campaign — pointed out several perceived flaws in their rivals’ candidacies.

“Every one of the Democratic candidates remaining would make a better president than Donald Trump,” Lau said. “But the primary contests ahead will be a test for all of the campaigns.”

In the memo, Lau wrote that Sanders “starts with a ceiling that’s significantly lower than the support he had four years ago,” referring to the Vermont senator’s two-way race against Hillary Clinton. In a much more divided 2020 field, Lau noted that Sanders is slated to receive around half the number of votes in Iowa and New Hampshire, compared to his 2016 performance.

“And he hasn’t yet faced the scrutiny of his record that will surely come with any further rise,” Lau added.

Lau made similar arguments with regards to the other top candidates. He noted that Biden’s support has slipped, “even among older voters and African-American voters, who have been his strongest supporters.” He said that Buttigieg’s “most significant challenge is yet to come,” the primary race moves to more diverse states, where the former South Bend, Indiana, mayor has struggled to find support. And while Klobuchar “is getting a well-deserved look from voters for the first time,” Lau wrote that her campaign “hasn’t been able to build out infrastructure for the long haul” and “like others in the race, she hasn’t yet faced the tough questions and scrutiny that accompany rising momentum.”

Lau also said that Michael Bloomberg — the former New York City mayor and billionaire candidate, who has invested hundreds of millions into later-voting states — was still not “on track” to meet delegate thresholds in 85 percent of the 14 “Super Tuesday” states that vote March 3.

“And keep in mind that Bloomberg will soon be forced to actually debate his record, rather than hiding behind millions in TV ads,” Lau added, referring to the fact the Bloomberg could qualify for the next Democratic debate.

The memo was a rare strategic departure for the Warren campaign, which has largely preferred to focus on policy over process and has avoided attacking rival candidates. The Cambridge Democrat, who surged in polls last summer, has since seen her support and fundraising stall, amid intensifying attacks from her opponents. Her campaign seems to expect a similar future for the other candidates with perceived momentum.

“Our campaign is no stranger to being written off or counted out early,” Lau wrote Tuesday, linking to articles last April that questioned Warren’s slow start at the time.

Following a third-place finish in the Iowa caucuses, Warren’s campaign predicted the unusually “wide open” race to continue through the nominating contests in New Hampshire, Nevada, and South Carolina, which have historically winnowed down previous primary fields. Warren has recently begun pitching herself as the candidate who would be most able to unite the more moderate establishment and progressive wing of the Democratic party.

“As the race consolidates after Super Tuesday, we expect the results to show that Elizabeth Warren is the consensus choice of the widest coalition of Democrats in every corner of the country,” Lau wrote.

In the memo, Lau said that the campaign’s internal projections show them at or above the required 15 percent support threshold to earn delegates in 108 of the 165 congressional districts in play on Super Tuesday. The only candidates that Lau said their campaign projected to be viable in more districts were Sanders (161) and Biden (159). Bloomberg, Buttigieg, Klobuchar, and the rest of the field were viable in fewer than 25 districts, according to their projections.

Barring a “seismic event,” Lau predicted that Super Tuesday would “be a significant winnowing contest on this field,” potentially leaving just Biden, Sanders, and Warren as the major competing candidates (despite the fact that Bloomberg is spending unprecedented amounts of money in those 14 states).

“In that three-way race, Elizabeth Warren is the candidate with the highest potential ceiling of support and the one best positioned to unite the party and lead the Democratic ticket to defeat Donald Trump,” he wrote, citing a recent Economist/YouGov poll that found 48 percent of voters were considering voting for Warren, which was more than any other candidate (Biden and Sanders were being considered by 47 and 43 percent of respondents, respectively).

Lau said that Biden’s potential collapse in South Carolina could further realign voters, though it’s unclear which candidate would benefit.

According to the website FiveThirtyEight, Sanders remains the favorite to win the necessary number of delegates to clinch the Democratic nomination headed into the party’s convention this summer. The next most likely scenario is that no single candidate gets a majority, according to their forecast, setting up a potential brokered convention.

Still, Warren, the plans candidate from the beginning, is sticking to her campaign plan as well.

“The process won’t be decided by the simple horse race numbers in clickbait headlines,” Lau wrote. “That’s never been our focus — our focus is on building a broad coalition to win delegates everywhere.” 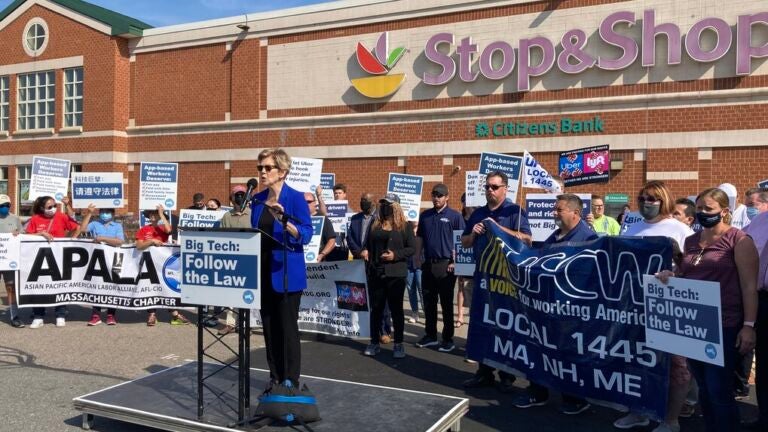