MANCHESTER, N.H. — His donors and supporters around the country are uneasy. His poll numbers in New Hampshire and nationally look increasingly shaky. He faces intense competition for moderate Democratic support and uncertainty about his viability in future contests.

As New Hampshire votes Tuesday in its presidential primary, former Vice President Joe Biden is confronting the possibility of a fourth- or even fifth-place finish, an outcome that could present existential political and financial threats to his once poll-topping presidential campaign and upend his bet on dominating later-voting, more diverse states like South Carolina.

He has been banking on showing strength in the South and the West, but there are increasing signs of fluidity in the Democratic race in those regions.

“Nothing is guaranteed,” said Anthony Daniels, the state House minority leader in Alabama, a Super Tuesday state where Biden is hoping to have a muscular showing early next month. “People want to know that whoever the candidate that is chosen can go the distance.”

Biden has sought to keep expectations low in New Hampshire, going so far as to say in a debate Friday night that he would “probably take a hit” in Tuesday’s primary.

And there are already signs that he is eager to move on.

On Monday, Biden held a phone call with top South Carolina supporters in which he expressed excitement about visiting the state, which has a predominantly black electorate in Democratic primaries, and promised to be there soon, according to people on the call. They added that he and a senior adviser, Symone D. Sanders, had both suggested that the race for the nomination would be heavily influenced by the outcome of the Feb. 29 primary in South Carolina, a state that is more representative of the party and that stands in contrast to heavily white Iowa and New Hampshire.

Yet a damaging loss in New Hampshire could put constraints on the resources Biden will have available to compete in subsequent contests. Several donors and other Democrats inclined toward Biden have privately expressed jitters about a fourth-place finish or worse in New Hampshire, and are closely watching the result. Another weak outcome, after Biden’s fourth-place finish in the Iowa caucuses, would be alarming, some have said. 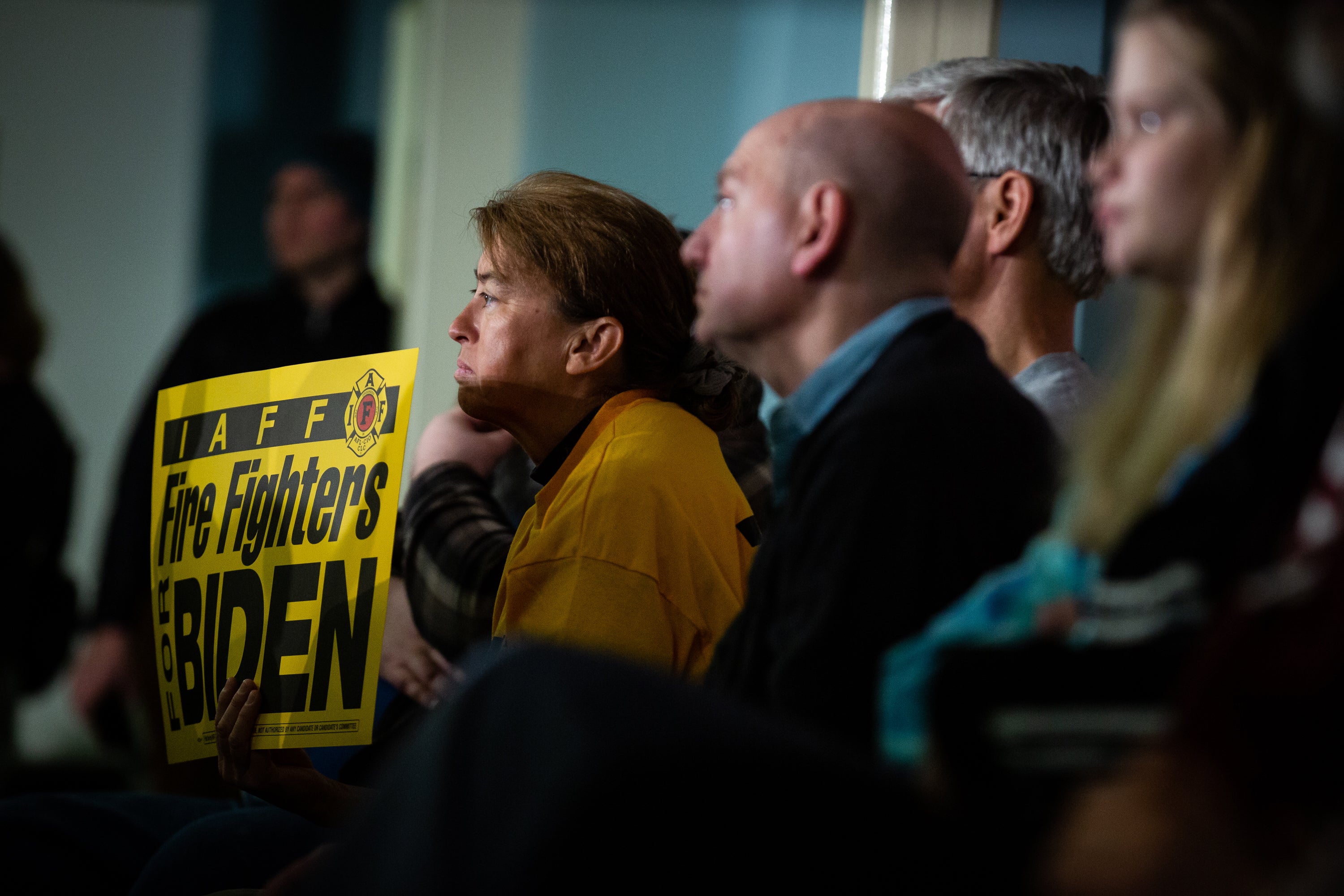 Biden has continued to emphasize experience and the need to defeat Trump above all else, priorities for plenty of Democrats.

Biden entered 2020 with the smallest amount of cash on hand among the top four finishers in Iowa, but he insisted Monday that he had enough money to fund his campaign.

He said his campaign had been raising about $500,000 per day; the amount could not be independently verified. His campaign raised about $250,000 per day in the fourth quarter of 2019, the last period for which candidates have reported their fundraising to the Federal Election Commission.

If Biden is collecting $500,000 per day, he would still be lagging far behind Sen. Bernie Sanders’s fundraising pace in the month of January, when he raised roughly $800,000 per day. Biden would also be trailing what Hillary Clinton raised per day in February 2016.

“They’ve struggled with money all year long and, you know, losses tend to slow down your money,” said David Axelrod, the prominent Democratic strategist who served as a top adviser to Barack Obama. “Even to do what they need to do in Nevada and South Carolina, they need to keep the money going. This has to be a huge concern.”

At a breakfast with reporters Monday hosted by Bloomberg News, Kate Bedingfield, a deputy campaign manager on Biden’s team, said, “We’re absolutely going to have the resources that we need to compete on Super Tuesday.” She said she believed that Biden’s perceived firewall in South Carolina would hold regardless of the New Hampshire primary results, pointing to his deep relationships with black Democrats there.

Several candidates, including Sanders and billionaire Tom Steyer, have made concerted attempts to cut into his lead with black voters, efforts that could accelerate if Biden is viewed as even more vulnerable after Tuesday’s vote.

Bedingfield also previewed how the campaign might try to frame a disappointing loss in New Hampshire: by alluding to the state’s demographics and warning the news media against writing anyone off before voters of color participate in a significant way.

“Doing well means we compete here, we make our case to New Hampshire voters, and we continue on,” she said. “We continue on with our plan, which is to ensure that diverse voices have their say before you guys call this race.”

Biden has kept up the hunt for votes in New Hampshire in the final days before the primary. On Monday morning, he brought doughnuts to a school bus depot in Nashua and asked workers there to consider supporting him. “Look me over, OK?” Biden said after explaining that he had worked as a school bus driver in upstate New York when he was in law school.

In a brief visit to a field office in Salem, Biden repeatedly projected an upbeat attitude, and almost immediately brought up South Carolina, which he suggested he would visit soon. “I feel good,” he told a small group of volunteers. “It’s feeling good,” he said at another point. “We’re feeling good,” he declared. “It just feels good,” he affirmed.

“Keep the faith,” he said as he concluded.

A damaging loss in New Hampshire could put constraints on the resources Biden will have available to compete in subsequent contests.

Biden could surprise in New Hampshire: He has long made overtures to Republicans and independents, and undeclared voters are an important constituency in the primary. Some of his crowds have seemed livelier than the ones he drew in Iowa, where his events often felt gloomy and small. He has the support of prominent Democrats in the state from across the ideological spectrum and has continued to emphasize experience and the need to defeat President Donald Trump above all else, priorities for plenty of Democrats.

But on the ground, signs of Biden’s challenges are palpable. Over and over, voters who would seem to be natural Biden supporters — moderate, opposed to proposals like “Medicare for All,” fond of the Obama era — said they were drifting toward other candidates.

Janice Dennis, 57, an Uber driver who takes care of her grandchildren, said she had once been a Biden supporter. She even had her daughter’s commitment card for Biden in her car Monday morning. But she was impressed by Sen. Amy Klobuchar in Friday night’s debate, she said, and worried about the energy level of Biden, 77, and his ability to take on Trump. She also suggested that he wasn’t sufficiently forward-looking.

“The main reason why I went toward Joe Biden is I felt he brought back the morality, the respect, to the office,” said Dennis, of Tilton, New Hampshire. But, she went on, “I feel like he is giving himself a lot of credit for what Obama did. I don’t feel like he’s saying anything to me.”

Warren Curtin of Litchfield, New Hampshire, a retired postal carrier who attended an event for Pete Buttigieg in New Hampshire last week, said he wanted to build on the Affordable Care Act rather than introduce Medicare for All, and said he was staunchly opposed to the most progressive candidates in the race, Sanders and Sen. Elizabeth Warren. He was exactly the kind of voter Biden is targeting in New Hampshire — but Buttigieg, he said, was his first choice. He liked the young former mayor’s ideas, he said. As for Biden, whom he saw a few weeks ago?

He questioned “whether he can stand up to this guy, to Trump.”

Biden and his campaign have insisted that Trump has attacked Biden precisely because the president is worried about facing him in a general election, and have argued that in contrast to the rest of the field, Biden is battle-tested against a president who will make sharp attacks on any opponent.

On Monday morning, Biden brought doughnuts to a school bus depot in Nashua and asked workers there to consider supporting him.

One potentially bright spot for Biden: Some of his supporters in later-voting states say that they are uninterested in following the leads set by the first two contests in the presidential race.

“Many South Carolinians have no orientation to Iowa except we know they grow corn,” said state Sen. Marlon Kimpson of South Carolina, who is supporting Biden. “New Hampshire is even more foreign because at least in Iowa, you’ve got big football teams. New Hampshire is a very small state, it’s not representative at all. I don’t even know that I would give the results there a footnote.”