WASHINGTON — The Senate voted Thursday to require President Donald Trump to seek congressional authorization before taking further military action against Iran, as Democrats joined forces with eight Republicans to try to rein in the president’s war-making powers weeks after he escalated hostilities with Tehran.

The bipartisan vote, 55-45, amounted to a rare attempt by the Senate to restrain Trump’s authority just over a week after it voted to acquit him of impeachment charges and nearly six weeks after the president moved without authorization from Congress to kill a top Iranian security commander.

Still, indignant at the administration’s handling of a drone strike in Iraq last month that killed a top Iranian official — a major provocation that pushed the United States and Iran to the brink of war — an unusually large number of Senate Republicans crossed party lines in an attempt to claw back Congress’s authority to weigh in on matters of war and peace.

“After many decades of abdicating responsibility — under presidents of both parties — it is time for Congress to take this so very seriously,” Sen. Tim Kaine, D-Va. and the lead sponsor of the measure, said.

“We need a Congress that will fully inhabit the Article I powers,” Kaine added, referring to the portion of the Constitution that grants Congress the power to declare war. “That’s what our troops and their families deserve.”

Kaine drafted the resolution in early January as tensions ratcheted up with Iran after the strike in Baghdad that killed Gen. Qassem Soleimani, Iran’s most important general. Because such measures enjoy special procedures under the 1973 War Powers Act, the Republican-controlled Senate was required to consider it.

In briefings with Trump’s national security team after the strike on the Iranian general, lawmakers in both parties, already angry that the administration had not consulted with them before the operation, complained that top officials demeaned and dismissed them in briefings for questioning the president’s strategy.

Both Republicans and Democrats who sponsored the resolution insisted that the measure was not intended to tie Trump’s hands but to reassert Congress’ constitutional prerogatives on matters of war. For decades, lawmakers in both parties have ceded those powers with little resistance, deferring to an increasingly assertive executive branch.

Trump viewed the resolution as a personal affront, and Wednesday urged Republicans to reject it, framing the measure as a dangerous show of timidity and an attempt by Democrats to “embarrass the Republican Party.”

“We are doing very well with Iran, and this is not the time to show weakness,” Trump wrote on Twitter, adding: “If my hands were tied, Iran would have a field day. Sends a very bad signal.”

The legislation is sure to pass the Democratic-led House, where Speaker Nancy Pelosi said it would be taken up “in the coming weeks,”, but White House advisers warned in a formal statement of administration policy that Trump would veto it if it reached his desk. The statement described the measure as “grounded in a faulty premise” because the United States was not currently engaged in any use of force against Iran.

In the Senate, Republican opponents of the measure mirrored Trump’s language, arguing that the resolution would shackle the president at a potentially perilous time and be viewed by Tehran as a message of weakness.

“If this passes, the president will never abide by it — no president would,” Sen. Lindsey Graham, R-S.C., said. “I want the Iranians to understand, when it comes to their provocative behavior, all options are on the table.”

But a small group of moderate and libertarian-minded Republicans who were rankled by the administration’s handling of the Soleimani strike supported the measure, insisting that it was both morally and constitutionally necessary.

Sens. Mike Lee of Utah and Rand Paul of Kentucky, who have advocated disengaging U.S. troops from prolonged military conflicts abroad, were infuriated by a contentious congressional briefing delivered last month by Trump’s top national security advisers on the operation. They complained that administration officials had been unwilling to engage in a genuine discussion about a possible military escalation in the Middle East. Previously lukewarm on their support for Kaine’s resolution, both senators signed on after the briefing.

“They were in the process of telling us that we need to be good little boys and girls and not debate this in public,” Lee said then, emerging red-faced from the briefing. “I find that absolutely insane. It’s un-American, it’s unconstitutional, and it’s wrong.”

They were joined on Thursday by six other Republicans in supporting the effort to curtail Trump’s war powers: Sens. Lamar Alexander of Tennessee, Bill Cassidy of Louisiana, Susan Collins of Maine, Jerry Moran of Kansas, Lisa Murkowski of Alaska and Todd Young of Indiana.

The vote was the latest in a series of bids by Congress over the past year to rein in Trump’s war powers. Last year, Congress cleared a bipartisan measure invoking the War Powers Act that would have cut off U.S. military support for the Saudi-led campaign in Yemen’s civil war, and a separate measure seeking to curtail the president’s war-making powers in Iran ping-ponged between the two chambers, passing the House but not the Senate.

Despite a recognition in both parties that much of the American public is weary of perpetual military conflict, the measures drew only modest support from Republicans, each time falling well short of the two-thirds majority vote necessary to override a veto.

Sen. Dick Durbin of Illinois, the No. 2 Democrat in the Senate, said that he had voted multiple times to send troops to war — first as a member of the House and then later in the Senate. He described them as “the toughest votes” he ever had to cast, “knowing that in the best of circumstances, that Americans will die.”

“Before you make that decision, you have to think long and hard, and many members of Congress would like to race away from that,” he said. He described the rationale adopted by many lawmakers as: “I’d just rather blame the president if it turns out bad.”Supporters of the resolution approved Thursday saw a glimmer of hope in the final vote tally. In July, the Senate rejected a similar measure to curtail the president’s war powers related to Iran, with only four Republican senators defecting to support it. Twice as many supported the resolution Thursday.

“We want to make sure that any military action that needs to be authorized is in fact authorized properly by Congress,” Lee said. “That doesn’t show weakness; that shows strength.” 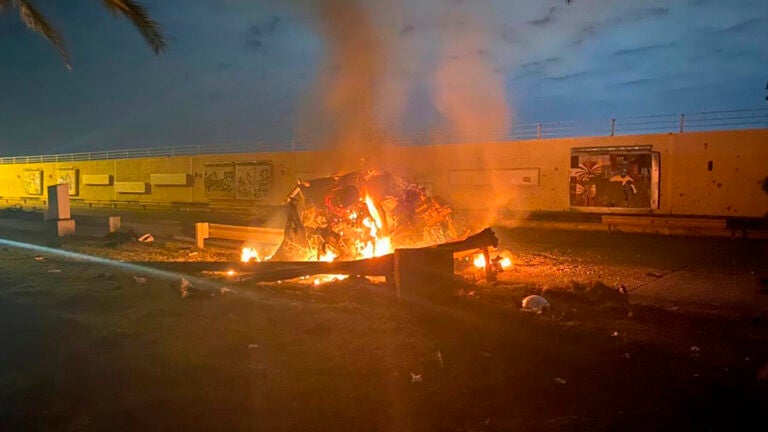 What Mass. politicians are saying about the killing of Iranian general Qassem Soleimani