Americans could get a check for $1,000 or more in the coming weeks, as more political leaders support what would be the most dramatic effort yet to try to prevent a worse recession and protect people from going bankrupt.

The idea originated with Sen. Mitt Romney, R-Utah, who on Monday called for every American adult to receive a $1,000 check “immediately” to help tide people over, until other government aid can arrive. By Tuesday, there was bipartisan support for the idea, including from President Donald Trump. The White House even suggested that the amount could be more than what Romney suggested, an acknowledgment of how big the economic crisis is becoming.

“We’re looking at sending checks to Americans immediately,” Mnuchin said, adding that the president wants checks to go out “in the next two weeks.”

This isn’t a new idea. The United States has done this twice before. During the Great Recession, the federal government sent every adult a $300 to $600 check (plus $300 per child). The same thing happened in 2001 with roughly the same amounts per person.

Most economists across the political spectrum like this idea because it’s simple and relatively fast. Still, it took about two months to get the checks to people in 2008, notes Mattie Duppler, a fellow at the National Taxpayers Union, a conservative-leaning consulting firm. Unlike unemployment insurance or food stamps, people do not have to apply for the check and there are no restrictions on how to use the money.

As the U.S. economy comes to a standstill, job losses are mounting and could reach the millions, economists say. A $1,000 payment won’t fully compensate people, but experts and politicians say it’s a good first step to helping people buy groceries and pay rent. It works out to the equivalent of one week of pay for the typical American, according to the latest Labor Department data, which shows median weekly earnings of $936 for full-time workers in the United States.

In past downturns, wealthier Americans tended to save the money, which blunted the economic aid, but lower-income Americans used it immediately to pay bills, a lifeline for their families and a boost to the economy. Many studies have shown that bumping up food stamps, welfare and unemployment insurance during downturns provides an even larger economic boost for the same reason: These Americans are the most cash-strapped, and they tend to spend the money quickly.

There are lots of questions about doling out money so freely. Some argue that rich people shouldn’t get checks, since the economic boost is so minimal. Others ask whether it’s wise to send money at a time when most Americans are supposed to stay home to prevent the spread of the virus. But economists say the money will be useful now for basic needs and to encourage future purchases as quarantines and curfews lift and people go out and about again.

Treasury Secretary Steven Mnuchin said Tuesday that millionaires would not be getting the checks. A Democratic proposal from Reps. Tim Ryan, D-Ohio, and Ro Khanna, D-Calif., would give at least $1,000 to everyone making less than $65,000. They point out that about 75% of Americans would qualify for it.

A plan from Sens. Michael Bennet, D-Colo., and Cory Booker, D-N.J., and Sherrod Brown, D-Ohio, would go further. It would give $2,000 for every American adult and child plus, if the public health emergency continues, another $1,500 check in the summer and a $1,000 check in the fall. The highest income earners would not get checks under the Democratic plan.

Economists across the political spectrum have been urging Congress to do this. Greg Mankiw, President George W. Bush’s chief economist, and Jason Furman, President Barack Obama’s chief economist, have praised the idea of sending quick cash. The money could be delivered faster to a lot of the hardest hit people, if it were sent via Social Security payments to the elderly or via the Electronic Benefit Transfer (EBT) debit cards that government aid recipients already have.

“Considering the difficulty of identifying the truly needy and the problems inherent in trying to do so, sending every American a $1,000 check asap would be a good start,” Mankiw wrote on his blog.

Furman tweeted: “Thrilled to see @MittRomney proposing $1,000 checks. This would [be] a critical floor of social insurance for hundreds of millions of Americans and would help the economy rebound more quickly when we are past the virus lockdown phase.”

One of the leading experts on recessions, former Federal Reserve economist Claudia Sahm, predicted that the U.S. government will have to send several checks since the gravity of the economic collapse is so vast.

“We will need MULTIPLE rounds of money to everyone,” Sahm tweeted.

French economist Olivier Blanchard, a former top economist at the International Monetary Fund, has compared this round of economic stimulus measures to a wartime situation and urged governments not to hold back on spending. While some have raised concerns that sending checks to most Americans comes with a hefty price tag that could send this year’s budget deficit to a record $2 trillion or more, Blanchard points out that that’s about 10% of the nation’s economy. During World War II, the United States ran deficits of over 20% of gross domestic product (GDP).

“The world is de facto at war,” Blanchard wrote on Twitter. 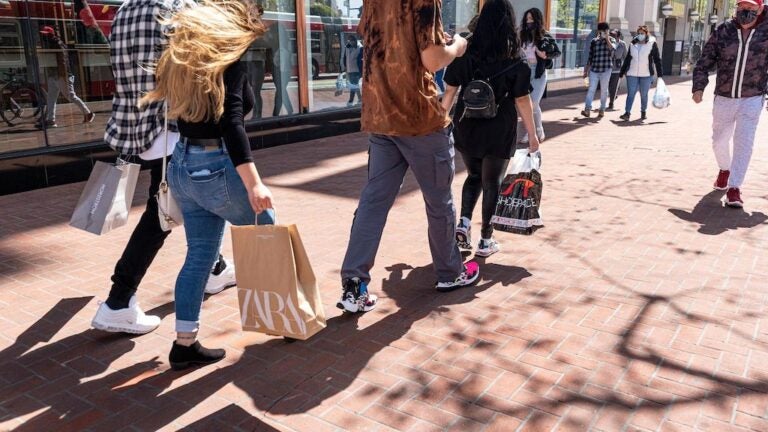 What happens to the economy when $5.2 trillion in stimulus wears off?