LARGO, Fla. (AP) — As restaurants across the country stacked chairs on tables and shut their doors to try to contain the deadly coronavirus, what would be the final visitors streamed into the Conservative Grounds coffee shop in Largo, Florida.

Fox News played on the televisions. Patrons posed for photos in a replica of the Oval Office. An 80-year-old man, defying officials’ advice to stay home, beamed near a life-sized cutout of a grinning President Donald Trump.

This Trump-themed coffee shop embodies the right edge of the country’s political divide. Outside its walls, state officials implemented an unprecedented shutdown of public life and Trump scrambled to fight a virus he’d once called a “hoax.” Criticism of the president’s preparedness ran rampant.

Inside, customers gave Trump an A-plus on his response to the spreading pandemic. “He’s doing great things,” the owner said Wednesday.

America has a history of unifying in trying times and rallying around the president. But after years of deep division, in the earliest, head-spinning days of the pandemic, a fractured electorate largely viewed Trump’s performance through the lens they chose long ago. But the stakes are higher than they’ve ever been. The body count will rise; the economy will almost certainly crater. Trump’s political fate may be left up to the sliver of moderates in the middle, who will choose whether to blame him for the crisis spiraling on his watch.

“This could be the coup de grace of his presidency. The way he handles this, history will judge, as well as the American people,” said Brandon Brice, host of a radio show called “Straight Talk” in Detroit, who supported Trump in 2016 and is looking to how he handles this crisis before deciding if he will again. “This is the president’s moment, right now.”

Trump for weeks denied the seriousness of the outbreak when it first emerged in China. In January, he assured the nation that “we have it very well under control” and he compared the virus to the seasonal flu. He lashed out, accusing the media and political opponents of pushing the pandemic as a “new hoax.”

His supporters followed his lead: Surveys from early and mid-March found distinct differences in how Democrats and Republicans reacted. A poll from The Associated Press-NORC Center for Public Affairs Research found that 36% of Democrats said they were very worried that they or family members would contract the virus, compared with 21% of Republicans.

Views on Trump’s handling of the crisis are also shaded heavily by partisanship. A Gallup poll found 82% of Republicans expressed some confidence in Trump. Among Democrats, that number was just 12%.

Whit Ayres, a Republican pollster, noted throughout Trump’s presidency, his approval rating has hovered between 42% and 46%, with little change despite the endless cycle of controversy and chaos. Recent polling shows that has remained steady.

“Attitudes about the president, both pro and con, are deeply ingrained and almost impervious to the effect of news,” he said. “Now, we’ve never had an event quite like this one.”

For most people, the new virus causes only mild or moderate symptoms, such as fever and cough. For some, especially older adults and people with existing health problems, it can cause more severe illness, including pneumonia. The vast majority recover.

Globally, there have been more than 11,000 deaths from over 275,000 confirmed cases, according to a running tally by Johns Hopkins University. More than 200 deaths have been recorded in the U.S.

At another time, a president might have expected to see his popularity rise. Past presidents have seen their approval ratings jump in times of crisis, disaster or war. President Jimmy Carter’s approval rating skyrocketed in the weeks after Americans were taken hostage at the U.S. Embassy in Iran. President George W. Bush was hailed for his unifying voice after the Sept. 11, 2001, attacks.

Trump this week abruptly turned to talking about the virus as a significant threat, and himself as a steady “wartime” leader. He shifted the blame to China and tried to rebrand Covid-19 as the “China virus.”

But presidential historian Douglas Brinkley said the shift from skeptic to wartime president may be difficult for Trump. He compared the president’s response with that of Republican President Herbert Hoover, who oversaw the Great Depression and dismissed the collapse of the stock market as exaggerated. When it proved disastrous, shantytowns came to be known as Hoovervilles. He was trounced in the next election by the Democratic governor of New York, Franklin Delano Roosevelt, who then steered the nation through the depression and World War II.

“He started off a Herbert Hoover and he done a 180 trying to be FDR,” Brinkley said. Voters in November will judge which one he is closer to being, he said, and some of that will be based on things now largely out of his control: how many die, how painful the economic fallout proves to be.

If the virus lingers through the summer, “he’s going to be left holding the bad soundbites and being seen as the leader who failed us when the bell rang,” says presidential historian Douglas Brinkley.

If the virus lingers through the summer, “he’s going to be left holding the bad soundbites and being seen as the leader who failed us when the bell rang — he was missing in round one for a 10-round fight,” Brinkley said.

“If it’s contained, people will say he was slow out of the gate, but once he got on the job, he understood the magnitude of what was happening and did the right things, and he might skate by on a better-late-than-never approach.”

David Ropeik, a retired Harvard instructor on risk communication, is even more skeptical of Trump’s ability to reshape himself as a leader able to unify a profoundly polarized nation.

“There are just a whole bunch of people who aren’t going to buy that,” Ropeik said. “He can’t change out of a MAGA hat into a general’s helmet.”

Ropeik said the most important thing for a leader in crisis is to be viewed as trustworthy — and the trust gap may be a crucial divide come November.

“This race is going to be determined by a bunch of swing voters in a handful of states. Those who are not the most devoted fans, who have any kind of slight ambivalence, this could well add to their mistrust,” he said.

Donald Scoggins, a retired real estate broker in Virginia who describes himself as a moderate Republican, was leaning against voting for Trump before the virus hit. He said he’s seen nothing so far to change his mind. Trump was too slow to react, Scoggins said.

“He’s just too divisive. We need a person at the helm that people can rally around, we need a sort of cheerleader who makes people feel confident, that can bring people together,” he said.

Brian Johnson, a Democrat and semi-retired corporate executive in Boulder, Colorado, is much hotter. He’s watched Trump’s reaction since January, worrying about his dismissal of the disease. Now he’s infuriated with the president.

“Trump’s never been double-digit approval rating for me, and now it’s like, can you go lower than zero?” he said.

But across the country, in states critical to the outcome of the election, Trump’s ardent supporters defended his actions and followed his lead to blame China.

In Luzerne County, a historically Democratic area in eastern Pennsylvania that flipped in 2016 to vote for Trump, Lynette Villano said she thinks the economy is resilient. It started from an extraordinarily high point, she said, and Trump deserves credit for giving the country the economic strength to be able to take the punch.

Villano, a billing clerk who wears a rhinestone Trump pin, has chronic lung disease and survived cancer twice. She recognizes she’s among those at highest risk. She says she’s not worried, she deeply trusts the president to look out for her, and she doesn’t think it’s time for political posturing and finger-pointing.

“If anything, this is going to show him as a strong leader who stepped forward and took every action possible to make things better,” she said from her home, where she’s waiting out the pandemic.

In Florida, the owner of the Trump-themed cafe posted a message on its Facebook page: “Those on the LEFT have fought for our downfall since day 1 and now the Corona ‘CHINESE’ VIRUS is impacting our business.”

Owner Cliff Gephart said he fully supports Trump’s handling of the crisis and trusts him to steer the country to calmer waters.

“Every decision the president makes, whether it’s about coronavirus or about the economy or taxation. It seems like coronavirus is just another partisan, down party lines,” he said.

One of his customers, 80-year-old George Latzo, said he wasn’t concerned enough about the virus to abide the public warnings to avoid gatherings.

“I’ve lived a long healthy life and I don’t know if this is going to be worse than the flu,” said Latzo, who wore a Trump 2020 hat and a black t-shirt that said, “Donald Pump,” depicting a muscular President Trump doing a bicep curl. “I guess we’ll have to wait and see.” 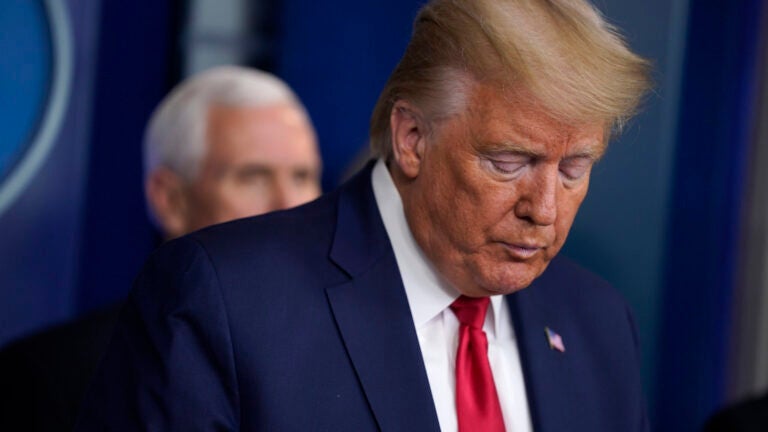