The Trump administration’s global scramble to secure more protective masks for U.S. healthcare workers has sparked tensions with allies including Canada and Germany, which fear they could face shortages as they battle their own coronavirus outbreaks.

The Trump administration had asked 3M to stop exporting the masks to Canada and Latin America, and to import more from 3M’s factories in China, the company said Friday.

At the same time, officials in Berlin expressed outrage over what they said was the diversion to the U.S. of 200,000 masks that were en route from China, while officials in Brazil and France complained that the U.S. was outbidding them in the global marketplace for critical medical supplies.

At a Friday evening briefing, President Donald Trump said he was invoking the DPA again to stop the export of “critical medical items by unscrupulous actors,” whom he did not identify.

The developments underscored the huge pressure the Trump administration faces as the number of coronavirus infections in the U.S. continues to skyrocket and state officials and healthcare workers continue to complain of worrying shortages of medical supplies at a time that most of the rest of the world also is battling the contagion.

Canadian Prime Minister Justin Trudeau said his government has been “forcefully” reminding American counterparts that trade “goes both ways across the border.”

Thousands of nurses in Windsor, Ontario, he noted, travel to Detroit each day to work in hospitals there. Several of them have since tested positive for covid-19, the disease caused by the novel coronavirus, which has infected more than 12,000 people in Michigan.

“These are things that Americans rely on,” Trudeau said, “and it would be a mistake to create blockages or reduce the amount of back-and-forth trade of essential goods and services, including medical goods, across our border.”

Trump announced late Thursday he was invoking the Defense Production Act in relation to 3M, suggesting it was for punitive reasons. “We hit 3M hard today after seeing what they were doing with their Masks,” he tweeted. “Big surprise to many in government as to what they were doing – will have a big price to pay!”

On Friday, Trump added he was “not happy with 3M,” without elaborating.

In an executive order, the White House said it would use the act to acquire “the number of N-95 respirators that the (FEMA) administrator determines to be appropriate.”

3M Chief Executive Michael Roman said the company would comply with the order.

“The narrative we aren’t doing everything we can as a company is just not true,” he said in an interview with CNBC, noting that 3M has doubled its global production of N95 masks since coronavirus hit the headlines in January.

He also cautioned that administration requests to stop mask exports from the U.S., and to divert production from other countries, could have serious trade and humanitarian implications.

“Ceasing all export of respirators produced in the United States would likely cause other countries to retaliate and do the same, as some have already done,” 3M said in a statement.

The company said it had “secured approval from China” this week to export 10 million masks to the U.S., from 3M’s factories in China. That followed a Trump administration request that 3M increase imports from its overseas factories, the company said.

Presidential trade adviser Peter Navarro said this week that the administration has “had some issues making sure that all of the production that 3M does around the world – enough of it is coming back here to the right places.”

In February, Navarro complained in an interview with Fox Business that China had moved to “nationalize, effectively, 3M, our company…to prevent them from sending us any stuff.”

In response, 3M said it has a “regionalized” manufacturing structure. “For example, the majority of our products made in China are sold in China,” a spokeswoman said.

German officials on Friday were stinging in their criticism of the Trump administration after a consignment of face masks that they said was ordered and paid for by the Berlin police was diverted en route from China.

Andreas Geisel, Berlin’s senator for the interior, said the delivery made it as far as Bangkok before being “confiscated.” In a statement he said he couldn’t provide further details of what happened at the airport but “we are currently assuming that this is related to the U.S. government’s ban on mask exports.”

“We consider this an act of modern piracy,” he said, calling on the United States to “comply with international rules.” “This is not how you deal with trans-Atlantic partners. Even in times of global crisis, Wild West methods shouldn’t rule.”

The statement did not name the company involved, saying only that it was a U.S. firm, but German press reports said the consignment was ordered from 3M.

Berlin mayor Michael Müller, who like Geisel is a member of the left-wing Social Democrats, called the action “inhumane and unacceptable.”

“This is quite a scandal,” said Karl Lauterbach, a German parliamentarian and health scientist. “We were relying on the delivery … it’s an international crisis and it’s important that we can rely on each other.”

In Brazil, the health minister this week said some of the country’s purchases from China fell through after the United States started transporting planeloads of equipment from China.

“The United States has ordered 23 huge airplanes to China to bring back the materials that they’d acquired,” Brazilian health minister Luiz Henrique Mandetta told reporters. “Our purchases – which we expected would bolster supplies – many fell through.”

He said it’s likely that Brazil had been outbid for the supplies, and that the Chinese reneged on the agreements.

Brazil announced Thursday that after distributing the last of its medical supplies, the health ministry’s reserves have now been completely depleted.

“In another week, we won’t have any more masks,” said Alexandre Telles, the president of Rio de Janeiro’s doctors’ union. “Everyone is very scared by the lack of protective equipment.”

In France, a number of regional officials told the Libération newspaper that they had ordered masks from Chinese suppliers, only to be outbid by American officials at the last minute.

“I had found a stock of masks available, but the Americans outbid,” said Valérie Pécresse, the president of the Paris region’s governmental council.

The U.S. emphatically denied the allegations. “The United States government has not purchased any masks intended for delivery from China to France,” the U.S. Embassy Paris wrote in a statement. “Reports to the contrary are completely false.”

The Washingon Post’s Amanda Coletta in Toronto, James McAuley in Paris and Luisa Beck in Berlin contributed to this report. 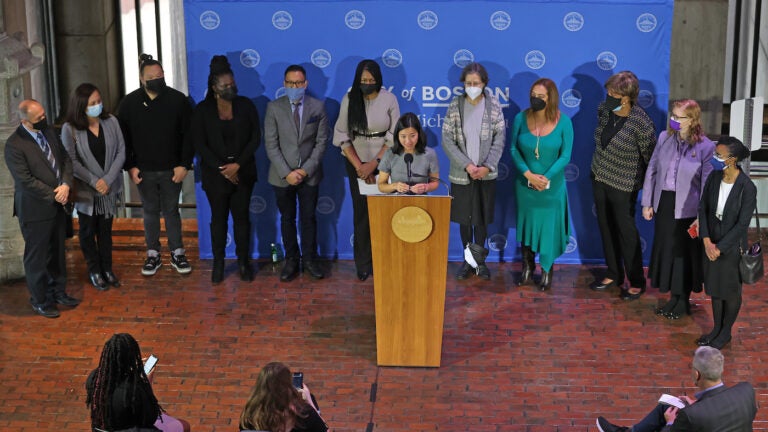 COVID-19 cases are up in Boston. Here's how the city is fighting the expected winter surge.