Joe Biden, who by dint of his age is among those most at risk from the coronavirus, has significantly escalated his public presence over the past week and prompted a fraught question: What is his presidential campaign doing to keep this most tactile of candidates safe from the deadly virus?

In little over a week, the 77-year-old former vice president has walked the streets in Wilmington, Del., to view protest sites, held a meeting with a group of clergy at a church and delivered two speeches before small audiences. On Monday, he is flying to Houston to meet privately with the family of George Floyd, whose killing May 25 in Minneapolis police custody has ignited national protests over police brutality and systemic racism.

Those attending Biden’s events are not being tested, and his campaign aides will not say whether they have asked the White House for a rapid-testing machine, as President Donald Trump once offered seemingly in jest. Instead, Biden’s campaign has been screening attendees, sometimes taking their temperatures, and asking everyone around him to wear masks and keep a social distance, a strategy that some of those advising Biden say they view as much more reliable than testing.

Biden and those advising him insist that he is modeling the simple strategies all Americans have been asked to follow, and so far they are not employing the same techniques as Trump, whose operation tests everyone who comes into close contact with the president.

Still, some doctors say that the presumptive Democratic nominee could be doing more to mitigate his exposure and that screening attendees and taking their temperatures can only go so far.

“This is very, very far from ideal. People should be tested,” said Irwin Redlener, a physician who directs the National Center for Disaster Preparedness at Columbia University and was formerly on Biden’s health-care task force. “Wherever they travel, there should be arrangements made in advance to test people coming to the event. That’s what I’d recommend. If you have 25 people and the candidate, there’s no reason why the day before or the morning of the event we couldn’t get all those people tested.”

Biden’s advisers say they are encouraging him to hold events outdoors when he can, to use hand sanitizer and to wear a mask when he is near anyone. He has regularly used a mask, only to be mocked by Trump and others when pictures have emerged of him doing so. And when he travels, he is not doing so in crowded subway systems or commercial planes, which limits his exposure to others.

“The thing we know works is social distancing. That is far, far more important than any testing,” said a person advising Biden on his public health safety operations, who, like others, spoke on the condition of anonymity to discuss matters relating to Biden’s health.

“We want to mitigate the risk. We’re not going to eliminate it,” the person added. “You think someone running for president will have pretty good risk mitigation. But it’s not going to be zero.”

Some on Biden’s team said part of their calculation is that testing is still unreliable and could give people false assurances of safety. They say everyone in a room with him should act as though they have the virus.

“People ask why isn’t he doing exactly what the White House is doing?” said the person advising Biden. “I’m not being flippant, but I don’t think you hold the White House up as the gold standard for how to do anything.”

The coronavirus significantly reshaped Biden’s campaign just after he had all but secured the Democratic nomination. For more than two months, he was largely confined to his basement, broadcasting basic videos to the world in an attempt to compete with a president who was holding daily televised coronavirus briefings.

Trump then began traveling — with a support system of a full medical staff, helicopters and Air Force One, along with the luxury of a rapid-testing system — while Biden stayed at home, adhering to state guidelines in Delaware.

That changed when some of the stay-at-home orders were relaxed at the beginning of June, but not without significant challenges for Biden, who has long been known as a politician who gets close to voters and relies on personal contact.

“It’s very hard to be a Biden candidate in a COVID-19 reality,” said Rabbi Michael Beals, who has known Biden for more than 15 years and attended one of his events last week. “He’s so intimate, and it’s hard for him.”

“If it weren’t in the pandemic, he would have given me a hug,” said Sharif Street, a Pennsylvania state senator who was at a different event. “He sort of shrugged like it was weird we couldn’t touch anybody.”

“Due to operational security, we do not comment on our protective means and methods,” said Secret Service spokeswoman Justine Whelan.

Attendees at Biden’s recent events say that it appears to be his campaign workers and allies who are monitoring for any health risks.

His first campaign-style event since the coronavirus outbreak confined him to his house occurred on June 1 at Bethel AME Church in Wilmington, Del. The night before the event, the church pastor called Beals to run down a list of questions from the campaign. 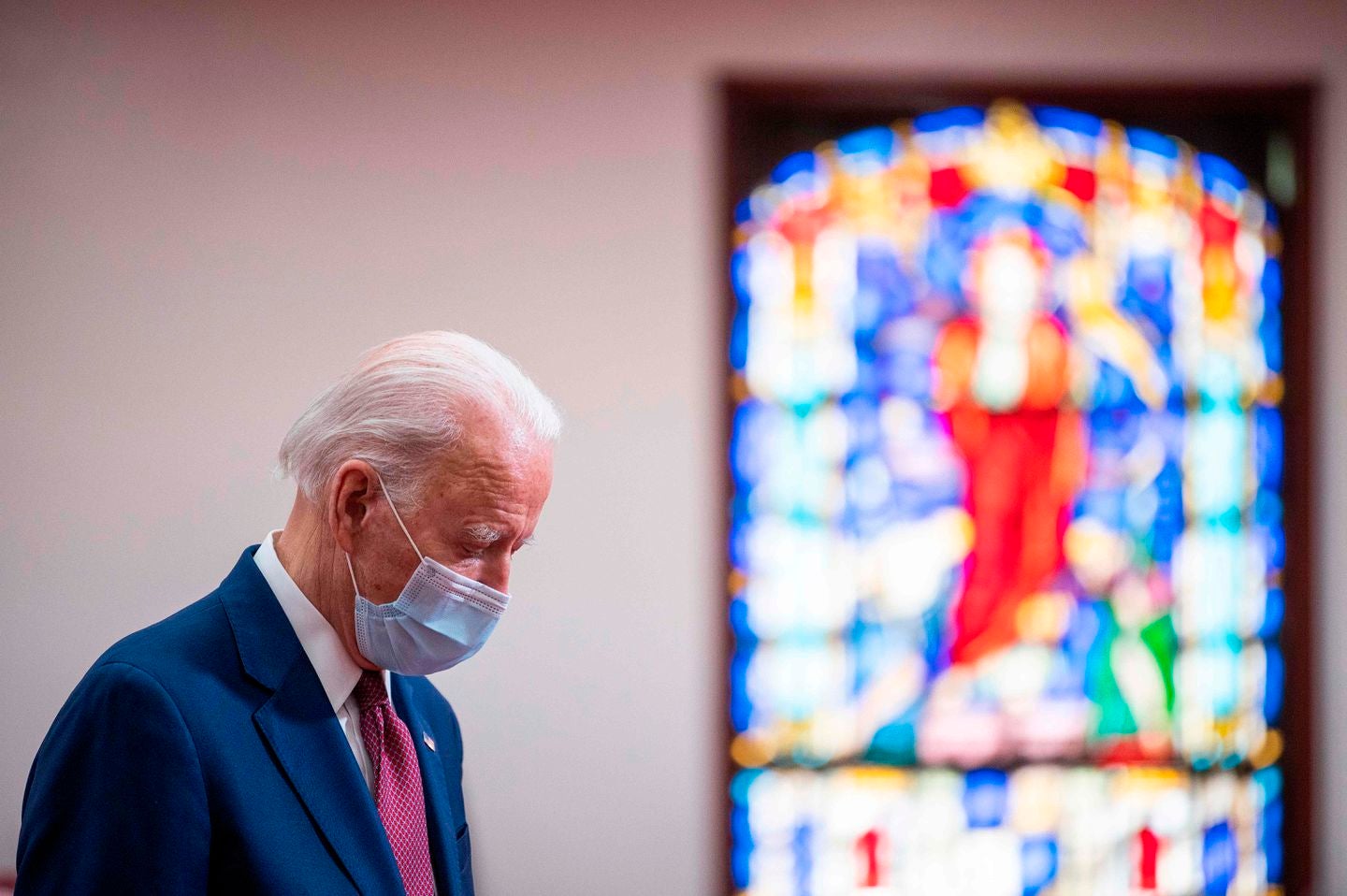 Beals was asked whether he had been in contact with anyone who tested positive in the past two weeks, as well as a range of questions about his own potential symptoms, including if he had a recent cough or if he had lost any of his sense of smell or taste.

“It was like going to the doctor’s office, quite frankly,” Beals said. He was told to wear a mask and practice social distancing at the event. The next morning, his temperature was taken before he could enter the church. Hand sanitizer was available, but no tests were administered.

“I would have gladly allowed myself to be tested,” Beals said. “But none of us were tested. We were asked about symptoms. But how do I know? I don’t have any outward signs. But if I’m asymptomatic, a vector, I wouldn’t know.”

The White House continues to do daily temperature checks of those working at the complex. “Every staff member in close proximity to the president and vice president is being tested daily for COVID-19, as well as any guests,” said White House spokesman Judd Deere.

The White House reportedly uses an Abbott testing system. The tests are not foolproof: The Food and Drug Administration has questioned the reliability of the Abbott rapid test, which can produce positive results in as little as five minutes.

While Abbott has denied there are flaws in the test, New York University researchers last month found that the Abbott tests missed a third of positive samples discovered by other tests, which can take at least 45 minutes for results. Trump has praised the swiftness of the test he uses and brushed aside questions about the validity of its results.

“I’d love to see him get out of the basement so he can speak,” Trump told Fox News. If Biden’s campaign asked for the tests, he said, “we would have it to them today.”

Deere declined to say whether Biden’s campaign has reached out to the White House, and a Biden aide would not say whether the campaign had sought any form of testing.

The Biden aide, who also spoke on the condition of anonymity to provide information about health safety protocol, would not say whether staff members who come into contact with him undergo tests through any other route, offering only that “staff is careful to follow social distancing and practice safe behavior.”

Biden has said several times that some on his health task force have said that he, as well as those around him, should be tested.

“What they’re telling me is they think that I should move [in] the direction [of] the White House, that anyone coming in should be tested,” Biden said last month on Snapchat’s daily political show “Good Luck America.” “And I should be tested. I haven’t been tested. So that’s, that’s in play. We’ll see how that goes.”

Biden’s campaign, which declined to comment for this story on the record, would not say whether he has since been tested. But one person advising him on health safety said that he should continue following federal guidelines that prioritize testing for those with symptoms.

“I wouldn’t do it because you’re curious,” the person said. “Literally, you’d have to test every day.”

Redlener, who resigned six weeks ago from the Biden campaign’s health-care task force because it conflicted with his contract as a public health analyst on MSNBC, said that Biden should do as much remote campaigning as possible.

Biden’s campaigning plans are still a work in progress and could change as he increases his range and as new coronavirus research emerges.

Before Biden spoke at the Wilmington church on June 1, the pastor told the small audience that no microphone would be used because of the chance it could spread the coronavirus. Everyone was socially distant, separated by empty pews. When he arrived at Philadelphia City Hall for his speech the next day, the chairs were spread out by at least six feet.

“There was no touching or selfies. No elbow bumps, no handshaking,” said Joanna E. McClinton, a Pennsylvania state representative who attended his speech in Philadelphia.

After Biden’s address, a smaller group went into a conference room in the mayor’s suite of offices because Biden wanted to hear more from them personally about the protests gripping the country. They attempted to gather around a round table, while somewhat awkwardly trying to keep the distance.

Biden insisted he would stand but was overridden by other officials in the room, who stood so he could sit and so everyone could be slightly more distant.

“We didn’t make any physical contact with him,” Street said. “None of us were tested, and none of us got close to him. We wanted to spread out.”

But at one point, the group wanted to take a photograph. As Biden’s campaign photographer began snapping, the group moved closer.

“Since this social distancing started,” Street said, “I’ve found the most difficult part is trying to take a picture.”