Decades of work at the New England Aquarium went into securing special protected status for an area of underwater canyons and mountains off Cape Cod.

Now, they fear it will be undone.

During a visit to Maine last Friday, President Donald Trump announced he was signing a proclamation to allow commercial fishing in the nearly 5,000-square-mile ecosystem, which was declared a national marine monument by former President Barack Obama in 2016.

“We’re undoing his executive order,” Trump said. “It’s ridiculous. What reason did he have for closing 5,000 miles? That’s a lot of miles. Five thousand square miles is a lot. He didn’t have a reason, in my opinion.”

In the opinion of the popular Boston aquarium, Obama did have a reason — based on years of their research establishing the area as an increasingly crucial habitat for marine life. Vikki Spruill, the CEO and president of the New England Aquarium, called the Republican president’s proclamation, on the heels of two other environmental deregulations last week, “irresponsible and shortsighted.”

“The Trump Administration has chosen a moment of national vulnerability to take aim at the environment,” Spruill said in a statement Monday, referring to the COVID-19 pandemic and the national protests against police brutality.

Aquarium officials say the “well-honed political diversion has not escaped our attention.” And they’re hoping to prove that many other Americans are on their side.

What exactly is the marine monument?

To understand the dispute, it’s helpful to have a grasp on what it’s actually about.

Officially named the Northeast Canyons and Seamounts Marine National Monument, the nearly Connecticut-sized area of water is located about 130 miles southeast of Cape Cod. And while it may not look like much from the ocean surface, the two-part zone includes three submarine canyons and four underwater mountains, known as seamounts.

Measured from the ocean floor, the largest seamount, Bear, is taller than Mount Washington, the highest peak in the Northeast. 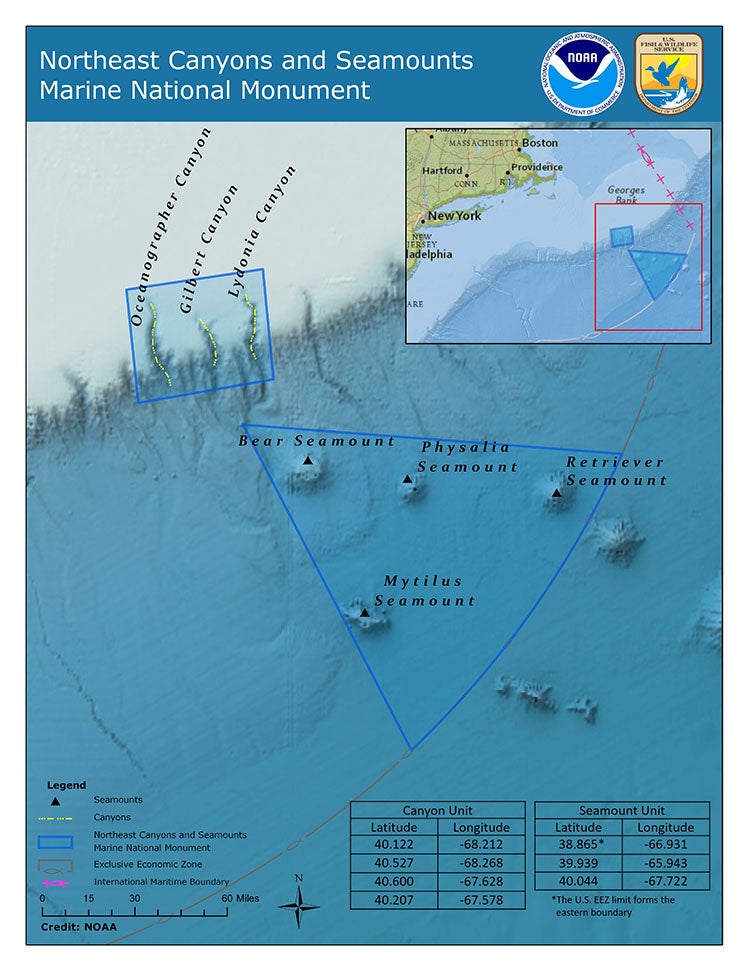 According to the National Oceanic and Atmospheric Administration, the steep slopes of the canyons and seamounts, along with ocean currents, create localized circular flows of water called eddies, which lift nutrients and help fuel a vibrant ecosystem. According to NOAA, there are at least 54 species of deep-sea coral there, along with endangered whales and sea turtles, dolphins, sharks, octopuses, squid, fish, and other marine animals.

Researchers at the 50-year-old New England Aquarium have been working for decades to understand more about the “biodiversity hot spot.” Even as the waters off New England warm at a faster rate than anywhere else in the country, aquarium officials say the depth of the canyons and seamounts provides a cold-water refuge for ocean life.

And in 2016, Obama’s designation made the area the first and only national marine monument in the Atlantic Ocean.

The monument designation bans disruptive activities, like oil drilling and wind farms, in the area, as well as most forms of commercial fishing. However, it did allow local red crab and lobster fishing to continue in the zone under existing permits until 2023. Recreational fishing is also still allowed.

What happened this past week?

A leaked memo in 2017 suggested the Trump administration was looking to repeal the monument’s fishing restrictions, which were met with resistance from local industries at the time of Obama’s order. According to The Boston Globe, some groups had proposed compromise rules to allow fishing in shallow waters — to limit the impact on deep-sea ecosystems — as well as continued red crab fishing, which was “primarily fished” in the area’s canyons.

Fishing industry groups argued at the time of Obama’s decision that the monument would be financially “devastating.” Gov. Charlie Baker’s administration also opposed the move, citing concerns about its impact on local fishermen (more recently, the administration has called for a more thorough study on the effects of the ban).

The Trump administration’s move on Friday completely lifts the commercial fishing ban, opening up the waters to more red crab and lobster fishing, as well as the return of those looking to catch fish like tuna and squid. The presidential proclamation argues that many fish species in the area are migratory and do not” merit additional protection beyond that already provided by other law.”

“We’re going to send our fishermen out there,” Trump said Friday in Maine. “You’re going to go fishing in that area now that you haven’t seen for a long time. Lobstermen and seafood producers, I want to just congratulate you.”

The proclamation also notes that fishermen were already subject to other federal regulations.

“The fishing industry is under the most restrictive and conservative fisheries management anywhere in the world,” Beth Casoni, the executive director of the Massachusetts Lobsterman’s Association, told The Hill, adding that the fishing phaseout would cost the state’s lobster industry $3 million a year.

While that amounts to only a small fraction of the region’s half-billion-dollar lobster industry, New England lobstermen have increasingly faced challenges due to climate change, tariffs, and — more recently — the coronavirus.

Supporters of the monument protection have said the concerns have been overblown.

In a 2017 memo, the Natural Resources Defense Council argued that a minuscule fraction of fishing occurred in the monument zone, and that there were a single-digit number of vessels using the area — mostly on a part-time basis — to trap lobster and red crab.

“We are not aware of any substantiated commercial fishing losses resulting from designation of the Northeast Canyons and Seamounts National Monument,” the group wrote. “The monument’s deep and rugged canyon and seamount areas were historically some of the least fished in the U.S. Atlantic and not unusually important for any fishery.” A pair of sperm whales photographed during a survey of the monument in February.

Monument advocates say that lifting the fishing ban increases the chances of both endangered species getting entangled and dropped traps damaging the fragile ecosystem below, which — if otherwise allowed to flourish — could benefit the health of surrounding fisheries.

“Fishing and environmental protection are compatible and science should be used to manage our marine ecosystems,” Sens. Ed Markey and Elizabeth Warren said in a statement Monday afternoon, decrying Trump’s decision, which they noted may likely face legal challenges.

Aquarium officials also stressed the need for a balanced approach to ocean management. Last week, the nonprofit said rolling back protections was “the wrong decision” and pledged to”fight on behalf” of the monument.

“Our research at the ocean surface, together with our partners’ research under the water, shows us what a special place this is,” Spruill said. “We know that strong protections of marine and terrestrial environments are needed if we are to nurture a vibrant and sustainable planet for future generations. We also know that the Monument has not negatively impacted fisheries in the region since its designation in 2016.”

The aquarium also launched an online letter-writing campaign encouraging members of the public to voice opposition to members of Congress. While acknowledging that elected officials from Massachusetts (and Maine) are already aligned with them, aquarium officials suggested they were trying to reach a much broader base of like-minded people.

“The goal of the online advocacy is for constituents to weigh in and tell their legislators that they care about and support the Monument,” Kelly Kryc, the aquarium’s director of marine conservation policy and leadership, told Boston.com. “There’s broader support and reach for the Monument than just in New England.”