A reliable part of Sen. Elizabeth Warren’s pitch during her 14-month presidential bid came when she touted her refusal to hold high-dollar fundraisers for her campaign, a stance she hoped would give her an edge in a field that exceeded two dozen candidates.

If she was successful, she said, the example would help end the hold that many liberals believe billionaires and millionaires have over the current political system.

Or so it sounded.

“We’re tearing this democracy apart,” Warren told reporters aboard her campaign bus in Rochester, N.H., in February as she denounced high-dollar fundraisers.

She talked in early states like Iowa and New Hampshire about her disdain for the typical fundraising practices used by most candidates; she was often rewarded with thunderous applause (but not enough votes). She talked about it on the debate stage, where she zinged other candidates for raising cash in fancy settings – like a California wine cave. She talked about it in friendly interviews with anchors like MSNBC’s Rachel Maddow.

On Monday night, however, Warren headlined a virtual fundraiser for Joe Biden. Her dog Bailey even made a cameo, walking by as the event proceeded. And in less than an hour, Warren raised $6 million for Biden’s campaign, making hers the highest grossing event that Biden has had to date.

Biden praised Warren for her “wonderful work” and said she’s one of the most “optimistic” and “righteous people” he knows. He twice called Warren a “change-maker.”

“We’re so lucky to have you on the front line,” Biden said.

The Warren event was a roaring success. She raised three times as much as one headlined last month by Hillary Clinton, who along with her husband Bill, has constructed an enviable fundraising operation. Warren also outraised — on Biden’s behalf — Sen. Kamala Harris, D-Calif., who starred in a recent Biden money event that brought in $3.5 million.

(All are expected to be eclipsed next week by a new fundraising anchor, former president Barack Obama.)

Warren also plans to appear at an event to raise money next month for the Democratic Senatorial Campaign Committee, which will benefit a host of Democratic candidates, according to a person familiar with the schedule.

“We wanted to prove that Democrats could build a competitive campaign in a primary without selling the candidate’s time. We did,” said Paul Egerman, who was Warren’s presidential campaign treasurer. “We always said we would not unilaterally disarm against Republicans and do everything to help the party and candidates up-and-down the ticket. That’s what we are doing now and will continue to do until November.”

Warren raised roughly $115 million during her bid without holding a big-dollar event.

Warren’s decision to embrace a practice that she derided is hardly a new phenomenon in politics — and one that may not bother voters accustomed to such reversals. Biden entered the presidential race pledging not to raise money via an allied super PAC, but after anemic fundraising, he dropped his opposition.

Warren also switched gears on super PACs. Her campaign website included a promise, in all caps, that she REJECTS SUPERPACS. But after two stinging losses in the first two states earlier this year, Warren dropped her opposition. The Persist super PAC was launched on her behalf, and the group raised nearly all of its money, $15 million, from one donor, Silicon Valley philanthropist Karla Jurvetson.

A careful read of the February 2019 pledge Warren made on banning high-dollar fundraising reveals some types of money gathering weren’t mentioned. She only pledged to ban organized fundraisers in the primary phase of the election — though she later said in a CBS interview that she would continue to avoid such events if she became the nominee.

Her post was silent on whether Warren would raise money for other candidates or the party.

Last summer, while still an active presidential candidate, Warren headlined a Democratic National Committee fundraiser in San Francisco, but skipped the exclusive meet-and-greet with the biggest donors. She also was the draw for a similar event in Boston.

“There is a lot of gray there. She loves to operate in the gray,” said former Ohio state Sen. Nina Turner, who backed Sen. Bernie Sanders, I-Vt., in the primary. (Sanders, too, has publicly sworn off super PACs while benefiting from one.)

Turner said that in craftingcareful language that stressed opposing fundraising for herself, but participating in it for others, Warren was creating “a distinction without a difference.” Her point: Warren is still putting herself in rooms with wealthy people who want something for her time.

“Supporters of Sen. Sanders will be disappointed because it is very clear that we need campaign finance reform in the United States,” Turner said. “Progressives thought they had another progressive in the race who was just as committed to that. But it is obvious that her commitment to that ended when her campaign ended.”

When Warren was an active presidential candidate, her rhetoric stayed away from the exceptions to her policy and focused on the way she was raising money for herself.

“I don’t spend my time at fundraisers for bazillionares and corporate executives, I just don’t do it. I mean, zero. None,” Warren said at a September town hall in Austin.

“I made the decision from the first day that I going to do this grass roots, that I was going to do this with online fundraising. I was not going to spend my time sucking up to billionaires and corporate executives and political action committees,” Warren said in November in a town hall in Waverly, Iowa.

In December, speaking to a reporter in Oklahoma City, she criticized her opponents’ approach to financing their campaigns, saying they were “selling access to their time for money.”

That same month she specifically targeted rival Pete Buttigieg after he held a fundraiser in a crystal-filled wine cave in Napa Valley, Calif.

“Billionaires in wine caves should not pick the next president of the United States,” Warren said in a debate.

The former South Bend, Ind., mayor replied by criticizing Warren’s own inconsistencies, noting that she’d transferred about $10 million from her Senate coffers to her presidential treasury, part of which had been raised at high-dollar events.

He said she shouldn’t issue “purity tests you cannot yourself pass.”

The current Warren stance on fundraisers puts her more in line with her pre-presidential campaign policy. Before she ran for president, she was one of the Democratic Party’s star fundraisers. Warren raised $42.5 million for her 2012 race and nearly $35 million for her 2018 campaign, according to the Center for Responsive Politics.

“She’s always been a very impressive fundraiser, albeit a disciplined one,” said Jim Manley, a former top aide to former Senate Majority Leader Harry Reid of Nevada. “In years past, she always got a lot more requests than she could do.”

He predicted even more requests for help will come her way after the $6 million event.

Warren’s flexibility did, however, win her some praise from an unusual quarter.

“Movement building is important but so is winning a governing majority and winning the White House,” said Matt Bennett, the executive vice president for Third Way, a center-left think tank that tangled with Warren during her early years in the Senate. “So she has been a really good Democrat.” 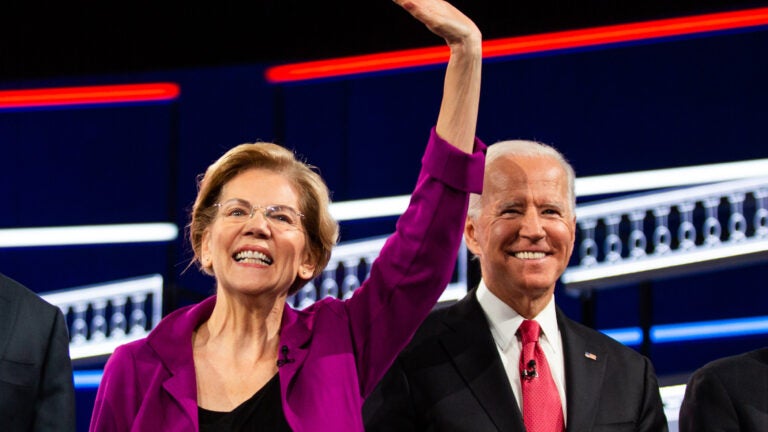