Despite a Supreme Court decision that stripped the Consumer Financial Protection Bureau of some of its independence, Sen. Elizabeth Warren says her brainchild agency is “here to stay.”

The Massachusetts senator took to Twitter to respond Monday to the top federal court’s ruling that the CFPB’s director could be fired by the president without cause. Previously, the director, who is appointed by the president for a five-year term, could only be removed for “inefficiency, neglect of duty, or malfeasance in office,” so that the independent federal agency would be shielded from political pressure.

In a 5-4 decision Monday, the conservative-led Supreme Court sided with a California law firm that sued in response to a CFPB investigation, arguing the financial watchdog’s structure is “unconstitutional.” The decision means that the president can now fire the CFPB’s director “at will” or, in other words, for basically any reason.

However, the court stopped short of more sweeping action, such as weakening its enforcement abilities or even abolishing the CFPB altogether, which has been a goal of many Republicans and the banking industry.

“Let’s not lose sight of the bigger picture: after years of industry attacks and GOP opposition, a conservative Supreme Court recognized what we all knew: the @CFPB itself and the law that created it is constitutional,” Warren tweeted Monday.

Let’s not lose sight of the bigger picture: after years of industry attacks and GOP opposition, a conservative Supreme Court recognized what we all knew: the @CFPB itself and the law that created it is constitutional. The CFPB is here to stay.

Even after today’s ruling, the @CFPB is still an independent agency. The director of that agency still works for the American people. Not Donald Trump. Not Congress. Not the banking industry. Nothing in the Supreme Court ruling changes that.

While the Cambridge Democrat said the Supreme Court’s ruling “handed over more power to Wall Street’s army of lawyers and lobbyists to push out a director who fights for the American people,” she noted that the CFPB remains an “independent agency” — as opposed to the “mouthful of mush” she had fiercely opposed a decade ago.

“The director of that agency still works for the American people,” Warren wrote Monday. “Not Donald Trump. Not Congress. Not the banking industry. Nothing in the Supreme Court ruling changes that.”

Warren first proposed a CFPB-like agency — created to crack down on predatory practices in the mortgage, loan, and credit card industries — as a Harvard Law School professor in a 2007 journal article. Following the economic crisis, she helped bring the idea to fruition in 2010 as part of the Dodd-Frank financial reform law — after a bitter fight with Wall Street, Republicans, and even some Democrats (it was only after Warren did not get nominated to lead the agency that she ran for Senate).

“My first choice is a strong consumer agency,” Warren told the HuffPost at the time, outlining her opposition to a CFPB with less independence. “My second choice is no agency at all and plenty of blood and teeth left on the floor.”

The decision Monday, written by Supreme Court Chief Justice John Roberts, ruled that the agency had too much independence. Though the court had previously ruled that agencies led by a group of commissioners could be shielded from presidential removal without cause, Roberts wrote that those precedents did not apply to an independent agency with a single director and that the CFPB’s structure violated the separation of powers.

“Such an agency lacks a foundation in historical practice and clashes with constitutional structure by concentrating power in a unilateral actor insulated from Presidential control,” wrote Roberts, who also sided with the court’s liberal justices in a separate abortion case Monday.

At the same time, Roberts declined to grant the petitioner’s request that the entire agency be struck down. He noted that Dodd-Frank included a “severability clause” and that abolishing the CFPB would “trigger a major regulatory disruption and would leave appreciable damage to Congress’s work in the consumer-finance arena.”

As Warren noted Monday, the agency returned $12 billion to consumers “scammed by financial institutions” under Richard Cordray, the previous director, who departed in 2017.

Since the election of President Donald Trump, Warren has repeatedly clashed with the administration and its current, Trump-appointed director, Kathy Kraninger, who was appointed in 2018, over purportedly failing to live up to the agency’s mission.

In the wake of the ruling Monday, some liberal allies pointed out another, perhaps ironic silver lining of the conservative court’s decision, should Democrats win in the November presidential election.

“Good news, Joe Biden can fire Kathy Kraninger the day he gets into office,” tweeted David Dayen, the executive editor of the American Prospect. “Under the previous structure he would have had to wait until 2023.” 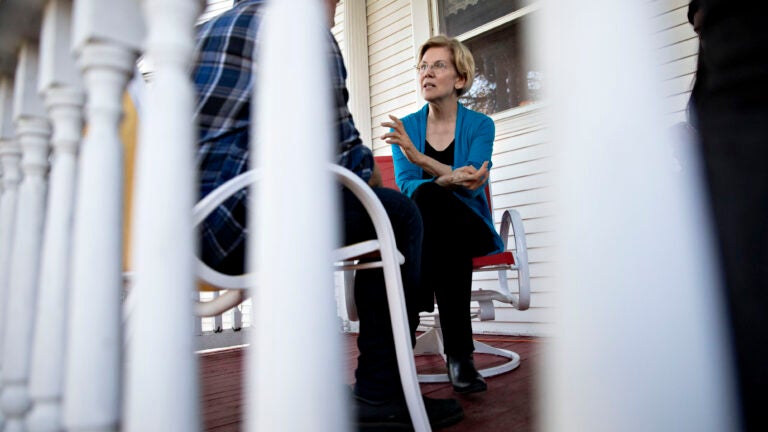 A toaster once nearly set Elizabeth Warren’s kitchen on fire. Here’s why the story sticks with her.