For weeks, Joe Biden’s lead in the 2020 presidential race has been growing. A Washington Post-ABC News poll released Sunday morning put it at 15 points, and it’s merely the latest to put it at double digits.

In other words, there’s little good news for the Trump campaign right now. The coronavirus pandemic continues to spread in ways that suggest it will be a significant factor come November, and increasingly negative reviews of President Donald Trump’s handling of it have solidified his underdog status. While Trump came from behind in 2016, he never trailed as consistently and by as much as he does right now. And crucially, voters who don’t like him or his opponent are breaking strongly for Biden, after breaking similarly for Trump in 2016.

That said, a lot can happen in 3 1/2 months. We got a taste for that Friday when Supreme Court Justice Ruth Bader Ginsburg announced a cancer recurrence, while saying her treatment was going well.

The prospect of a Supreme Court vacancy — whether imminent or even perceived as likely — is the kind of thing that could logically shake up the race. But it’s not the only thing that could do so.

Below, we look at a few things that could do so in significant ways.

While political analysts have spent the better part of the last three-plus years theorizing about how Trump pulled off his surprise 2016 win, relatively little attention has been paid to the role of the Supreme Court.

Justice Antonin Scalia died in February 2016, and Senate Republicans made the unprecedented decision to block the confirmation of President Barack Obama’s nominee to replace him, Merrick Garland. Polls showed Americans disagreed with that gambit.

But polls also showed that the vacancy likely accrued to Trump’s benefit. As The Washington Post’s Philip Bump has written, voters who emphasized the next Supreme Court pick tilted toward Trump, with 26 percent of Trump voters saying Supreme Court nominees were the most important factor in their vote. That compared with 18 percent of Hillary Clinton voters. GOP strategists have credited Trump with releasing a list of possible Supreme Court nominees ahead of the election, which perhaps whetted the appetite of some conservative-leaning voters who harbored reservations about him.

Such could plausibly be the impact in 2020. Voters who generally side with the GOP could be reminded of what’s at stake in arguably the most influential branch of government. They’ve already got a 5-to-4 conservative majority on the court, thanks to the second of Trump’s picks, Brett Kavanaugh, who replaced the previous swing vote, Anthony Kennedy. But some recent decisions reinforce even how tenuous that edge can be.

At the same time, some Republicans wagered that Kavanaugh’s treatment in his confirmation hearings might be their silver bullet in the 2018 midterms, and that didn’t totally pan out. What’s more, given the most likely vacancies are on the liberal side of the court, perhaps middle-of-the-road voters will reason that having a Democrat like Biden appoint a replacement would be preferable – or may otherwise simply want the court to remain relatively balanced.

The upside for Trump here would seem to be the rallying of his base behind a common and very important cause. Whether Ginsburg or anyone else appears to be on the way out, expect him to again play up the importance of a GOP president appointing the next justice.

Polls this far from an election generally focus on registered voters, given it’s difficult to gauge who might actually turn out. But as the election approaches, pollsters will shift their models to emphasize likely voters – i.e. those who are not just registered but actually primed to vote.

There’s some reason to believe that could benefit Trump.

It’s generally assumed that likely-voter screens help Republicans, because their voters are slightly more likely to turn out. There is also more enthusiasm for Trump among his voters than for Biden among his – though that seems to be counterbalanced by Biden voters being enthusiastic not about their candidate, but about voting Trump out.

That said, there was little evidence Trump benefited from likely-voter polls in 2016. Some election post-mortems suggested likely-voter screens in some key states actually made Clinton’s lead look slightly bigger than it was.

One thing that has followed Biden for just about as long as he’s been in politics is his tendency to commit gaffes. The former vice president often says, “No one ever doubts that I mean what I say. The problem is, I sometimes say all that I mean.”

Biden has mostly avoided one of these kinds of moments in the general election, with the exception of his comment that black people who were considering voting for Trump “ain’t black.” They also cropped up a number of times in the primaries, including when he said, “Poor kids are just as bright and just as talented as white kids” and immediately tried to correct himself, saying “wealthy kids, black kids, Asian kids.”

Biden has kept a low-profile of late — in large part because the coronavirus pandemic makes traditional campaigning difficult. But he also hasn’t done national media interviews or given many news conferences. The Trump campaign and its allies have tried to smoke him out by accusing him of hiding in his basement. Thus far, it’s been clear that letting Trump be the focal point, however deliberate, seems to be a strategy that is working for Biden.

But it won’t always be. There will ostensibly be debates. The pandemic might (hopefully) wane, allowing for more traditional and less-scripted campaign moments.

There’s an argument to be made that gaffes matter less and less in an election in which both candidates have such tendencies. But each of the last two campaigns have seen such memorable flubs by the loser — Mitt Romney and his 47% comment and Clinton and her deplorables comment, which she has said was a “gift” to Trump.

Perhaps the real danger for Biden, though, is that an accumulation of them could undercut the idea that he’s a steadier leader in the face of crises and other big challenges.

Polls suggests the coronavirus outbreak is a clear and growing negative for Trump as we head into the meat of the 2020 general election. Given his inability to adjust course, that seems likely to continue to be the case. One adviser who spoke to The Washington Post on the condition of anonymity to discuss private conversations said Trump is “not really working this anymore. He doesn’t want to be distracted by it. He’s not calling and asking about data. He’s not worried about cases.”

That’s not ideal — politically or otherwise.

But there’s another unpredictable way in which the virus could impact the election: by affecting turnout. Many states are moving toward mail-in balloting, for instance, but the GOP is fighting that. There are also arguments over which ballots will be counted; do they have to be mailed by Election Day or actually received by then? A judge in Michigan this week ruled that it’s the latter. What if too many people send in ballots too late and/or there are logjams in the Postal Service?

There are reasons to believe this factor could benefit Biden — most notably that Democrats seem to be taking advantage of it much more than are Republicans, perhaps because of how much Trump has derided voting by mail. But it’s not clear whether that actually adds to Biden’s vote totals or just means people who would otherwise vote in-person are voting in a different way.

There’s also the prospect that a continued bad outbreak would prevent people who don’t vote by mail from turning out in-person. And who is more likely to turn out in that situation? Perhaps people who are less concerned about the virus, who polls have repeatedly shown are disproportionately Republicans and Trump supporters.

It doesn’t mean this will necessarily help one side or the other; it just means that we’ve never truly dealt with this kind of thing in modern political history. And however bad things look for Trump, strange things — perhaps even stranger than we saw four years ago — could happen. 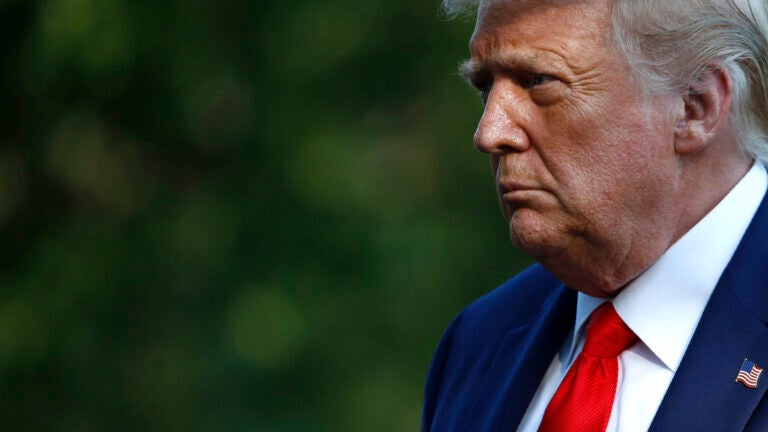