Massachusetts Gov. Charlie Baker dismissed President Donald Trump’s suggestion Thursday morning that the November elections should be delayed in the wake of the COVID-19 pandemic.

During a press conference Thursday, the Republican governor said it was “critically important” that both the general election on Nov. 3, as well as the Massachusetts state primary on Sept. 1, happen as scheduled. Baker added that lawmakers in the Bay State (and across the country) were “right” to pass reforms to expand vote-by-mail options, which he said would make the process safer for seniors and others who are particularly vulnerable to the virus.

“But elections need to happen and there’s no reason why this one can’t happen when it’s supposed to happen in September and November,” he added.

Baker’s comments came after Trump floated an election “delay” in a tweet Thursday morning, citing concerns that expanded mail-in voting would result in “the most INACCURATE & FRAUDULENT Election in history.” Election experts say that mail-in voter fraud, while higher than the rate of in-person voting fraud, remains exceedingly rare. Delaying an election would also require an act of Congress, so Trump lacks the power to unilaterally make the change.

Even though many states delayed primary elections during the height of the pandemic, Baker pointed out that Massachusetts held several municipal and special legislative elections this past spring when the state’s positive COVID-19 test rate “was north of 10 percent,” roughy five times higher than current levels.

Citing his experience in his hometown of Swampscott, the governor noted that in-person voting was a relatively smooth process — with several safeguards to promote social distancing.

“They completely changed the way they handle polling, reduced the number of polling places, went to much bigger spaces, spread everybody out, it worked fine,” Baker said.

While more than three-quarters of the United States will have vote-by-mail options, voting rights advocates have noted that a vast majority of the population has traditionally voted in person. Some states, like Massachusetts, have also expanded early voting in the hopes of avoiding polling place crowds and lines on Election Day.

As a more moderate Republican, Baker has often criticized Trump’s policy and rhetoric — most recently in June after the GOP president suggested governors use force against protesters follow the killing of George Floyd by Minneapolis police.

“Make no mistake: the election will happen in New Hampshire on November 3rd,” Sununu tweeted. “End of story. Our voting system in NH is secure, safe, and reliable. We have done it right 100% of the time for 100 years – this year will be no different.” 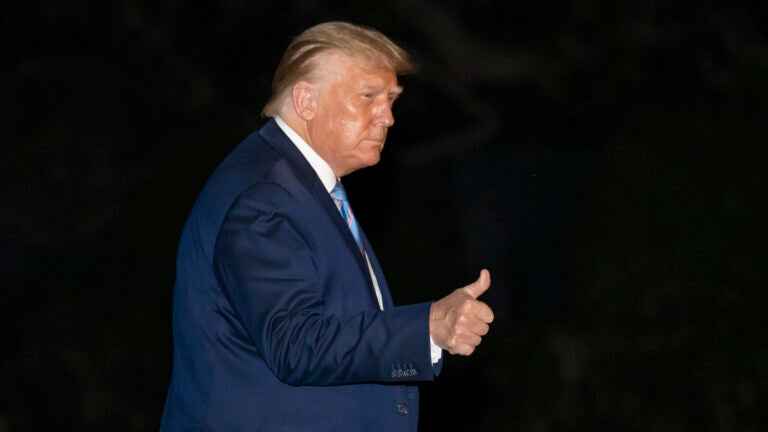