Holyoke Mayor Alex Morse claimed Monday night that efforts to impede his primary challenge against incumbent Rep. Richard Neal “go all the way to the height of the Massachusetts Democratic Party” — and predate the “suspicious” allegations levied against him by a group of college students.

Morse and Neal squared off in a debate Monday night hosted by New England Public Media. And for the most part, the two Massachusetts Democrats got the issue-oriented event they wanted. Morse criticized Neal for not wielding his position of power in Congress to more urgently meet the needs of the most vulnerable residents of the 1st District, while the 71-year-old congressman worked to cast doubt upon his challenger’s record in the city of Holyoke.

However, the debate began with several questions about the accusations that Morse, a 31-year-old openly gay man, pursued sexual relationships with college students in the region, amid reports that the accusations were part of a long-running scheme by several students who were hoping to curry favor with Neal and who reportedly received assistance bringing the claims forward from top leaders of the state party.

“Obviously it’s no coincidence, the timing of these allegations and accusations that go all the way to the height of the Massachusetts Democratic Party,” Morse said.

For the first time, he also said that the state party chair, Gus Bickford, “took me to lunch over a year ago and discouraged me from running against this congressman right here.”

“I know what it’s like to go up against power nine years ago, and I’m doing the same today,” said Morse, who narrowly unseated an incumbent Holyoke mayor to win his first term as a 22-year-old.

Bickford disputed Morse’s account of their year-old meeting Monday. While he confirmed meeting with Morse over lunch before he entered the race last July, Bickford told MassLive that “at no point did I tell the Mayor that he should not run for Congress.”

“The Party has been and remains neutral on this race and in all contested Democratic primaries,” he said.

The debate aired less than two hours after a report Monday by The Intercept that said Veronica Martinez, the Massachusetts Democratic Party’s executive director, told members of the College Democrats of Massachusetts to delete records of communications between themselves and the state party, after the outlet reported last week that they had referred the students to a third-party lawyer and Neal supporter to make their allegations against Morse public.

Martinez said the claim that she told students to delete records of their communications was “completely false,” according to The Intercept.

During the debate, Neal said his campaign had no contact with the students but said “they should be heard.”

“I don’t even know the names of the students that have stepped forward,” the congressman said.

Morse, who has acknowledged dating adult college students, said he “would never want to make someone feel uncomfortable.” However, he decried the “backroom-coordinated political smear against our campaign by folks that support this congressman’s campaign.”

“I will not apologize for being a young person, for being gay, and for being single,” Morse said. “And having consensual relationships with other adults, but I think the voters at home would rather talk about health care and the issues that they’re struggling with right now.” 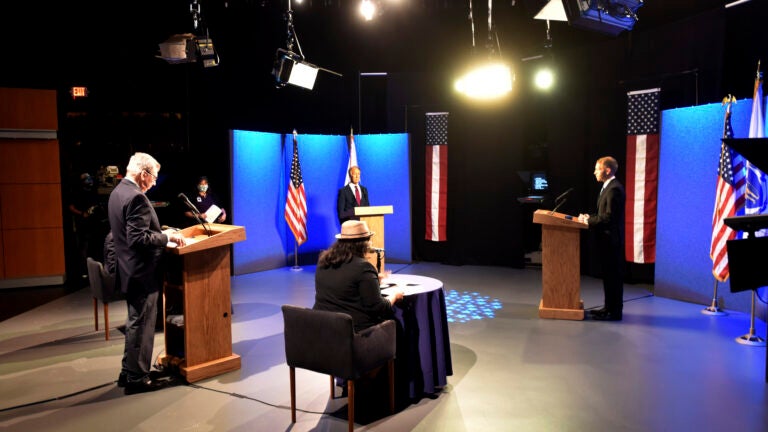