LONDONDERRY, N.H. (AP) — Fresh off accepting the Republican Party’s nomination, President Donald Trump said Friday he was the only thing standing between “democracy and the mob,” as he lashed out at protesters who accosted his supporters as they left the White House the night before.

Sowing fear about the implications of a Joe Biden victory to battleground state voters, Trump held a rally in New Hampshire on Friday evening. Looking to close his Democratic rival’s lead with just over two months until Election Day, Trump was launching an aggressive travel schedule — and continuing to flout coronavirus guidelines.

Trump opened his rally with a rant against demonstrators who confronted those leaving his convention speech on the South Lawn. Some guests at the political event, including Kentucky Sen. Rand Paul, needed to be escorted by police officers to safety upon leaving the White House grounds.

“They walked out to a bunch of thugs,” Trump said, criticizing District of Columbia Mayor Muriel Bowser for not doing more to protect his supporters. “Unhinged, manic rage. You ought to see last night in Washington, it was a disgrace.”

It marked his latest attempt to frame the general election as a dire choice between two futures for the nation — a theme he was expected to amplify on the campaign trail.

Trump said he directed White House chief of staff Mark Meadows to study how to call in the National Guard to the nation’s capital. Trump previously ordered federal troops to the District in May amid protests over the killing of George Floyd in the custody of Minneapolis police.

“We’re not supposed to go in unless we call it an insurrection, and that’s a big statement,” Trump said. “But you know what we’re going to do. … We’re going to have to look at it because we’re not going to let that happen to people that go to the White House to celebrate our country.”

“The agitators will go from rioting in the streets to running the halls of government,” he added, saying voters needed to support him to “save democracy from the mob.”

“No one will be safe in Biden’s America,” he added.

Speaking in New Hampshire, a state he lost in 2016 by fewer than 2,000 votes and is a top pickup opportunity for him in 2020, Trump repeated unfounded allegations that thousands of voters were bused into the state from neighboring Massachusetts four years ago.

Trump also launched a new attack on Democratic vice presidential candidate Kamala Harris, speculating on the possibility that she could assume the presidency from the 78-year-old Biden. “You know I want to see the first woman president also, but I don’t want to see a woman president get into that position the way she’d do it, and she’s not competent,” Trump said. “She’s not competent.”

He suggested his own daughter, White House senior adviser Ivanka Trump, as a more suitable occupant for the Oval Office.

Trump departed the White House by motorcade Friday, requiring it to weave through District of Columbia streets packed with demonstrators participating in a commemoration of the 1963 March on Washington for Jobs and Freedom. The motorcade made it to Joint Base Andrews without incident. Isolated groups of protesters on street corners made their presence felt through gestures directed at the motorcade.

While the coronavirus kills 1,000 Americans each day, Trump defied his own administration’s pandemic guidelines on Thursday to speak for more than an hour to a tightly packed, largely mask-less crowd. In New Hampshire, a campaign advisory said masks for attendees are “required” in accordance with Republican Gov. Chris Sununu’s executive orders, and would be provided.

Similar indoor-outdoor rallies at aircraft hangars in recent weeks have seen limited compliance with face covering mandates. The event format has become the Trump campaign’s go-to amid the pandemic.

Before Trump arrived, many in the crowd did not put their masks back on after singing the national anthem. They later booed when a campaign staffer called on them to do so.

“This is a peaceful protest,” read official signs handed out by the Trump campaign, echoing a rationale Trump has used to violate local ordinances and contrast his political events with racial justice protests sweeping the nation.

Trump is anxious for a return to normal activities and complained on the way to New Hampshire about the state of the college football season. In the Big Ten conference, coaches and medical personnel are working on multiple plans for staging a football season — including one that would have the league kicking off during the Thanksgiving weekend. The conference is filled with teams from battleground states that will prove critical in the upcoming election.

“No, I want Big Ten, and all other football, back – NOW,” Trump tweeted. “The Dems don’t want football back, for political reasons, but are trying to blame me and the Republicans. Another LIE, but this is what we are up against! “

Trump’s pace of travel is expected to pick up to a near-daily pace. Biden, who has largely weathered the pandemic from his Delaware home, announced Thursday that he will soon resume limited campaign travel.

Trump mocked Biden’s announcement, saying, “Today it was announced that Joe Biden is coming out of the basement,” speculating it was “because the poll numbers have totally swung.”

Trump last attempted to visit New Hampshire six weeks ago, when he called off a trip on the eve of a scheduled campaign rally citing the threat from a tropical storm — but also as his campaign worried that attendance would be sparse amid a nationwide surge in virus cases. That rally was to have been Trump’s first since his embarrassing return to the campaign trail in Tulsa, Oklahoma, in June, where he spoke to a half-empty arena and an anticipated overflow crowd never materialized. 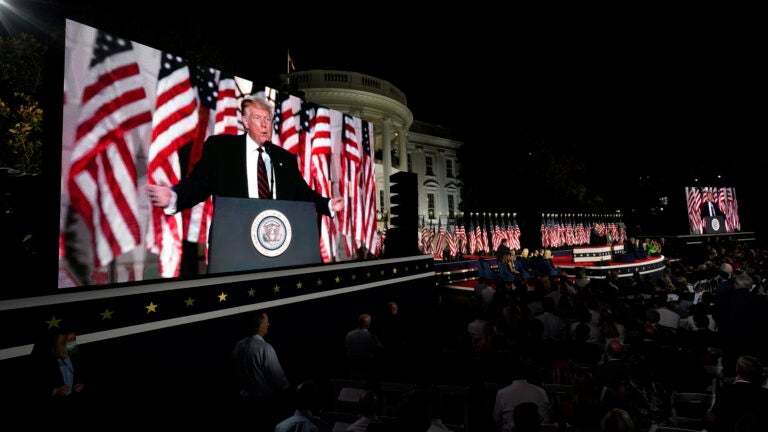 Bragging rights to Biden over Trump in television ratings