If the signs being brandished at the Massachusetts State House Sunday were any indication, a lot of Bay State parents aren’t planning to roll over when it comes to mandatory influenza vaccine shots for their children.

Gov. Charlie Baker announced Aug. 19 that flu vaccinations will be required for all students 6 months or older who attend child care, pre-school, school and college in Massachusetts, in an attempt to reduce the possibility of the health care system becoming overburdened by the dual punch of COVID-19 and the typical seasonal flu.

The decision drew immediate blowback from many parents and others concerned that the order was an example of government overreach. And on Sunday, protesters crowded along Beacon Street to express their displeasure, occasionally chanting, “We will not comply, we will not comply!,” according to The Boston Globe.

Signs admonished Baker that “Parents Call The Shots,” “Coercion Is Not Consent,” and “Mama Is Pissed!” At least one protester waved a large flag emblazoned with “Trump 2020: No More Bullsh–.”

Students must get the influenza vaccine by Dec. 31, the state Department of Public Health said in a statement. 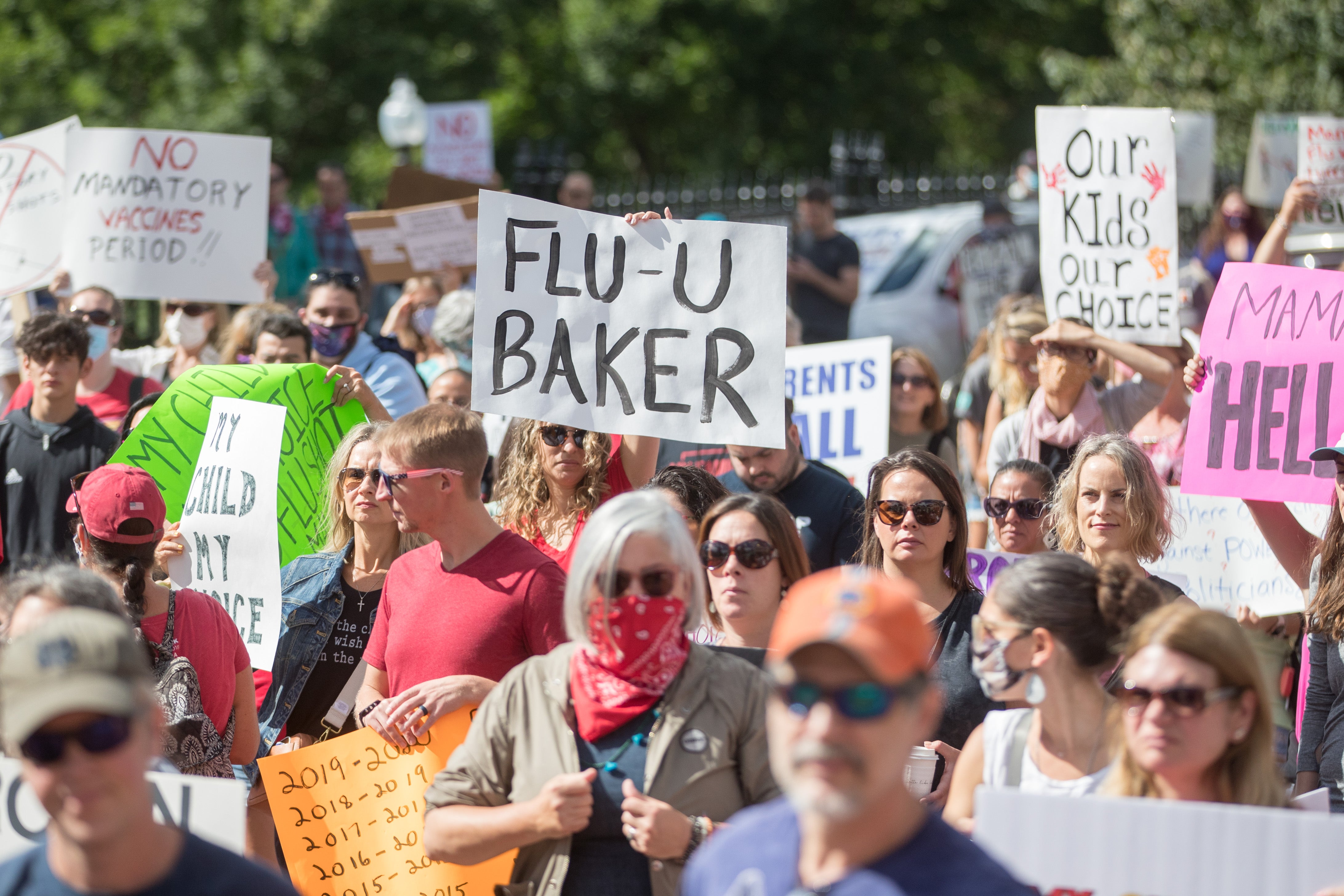 Activists had some choice words for Gov. Charlie Baker Sunday in response to his mandate that all Massachusetts school students receive the flu vaccine . 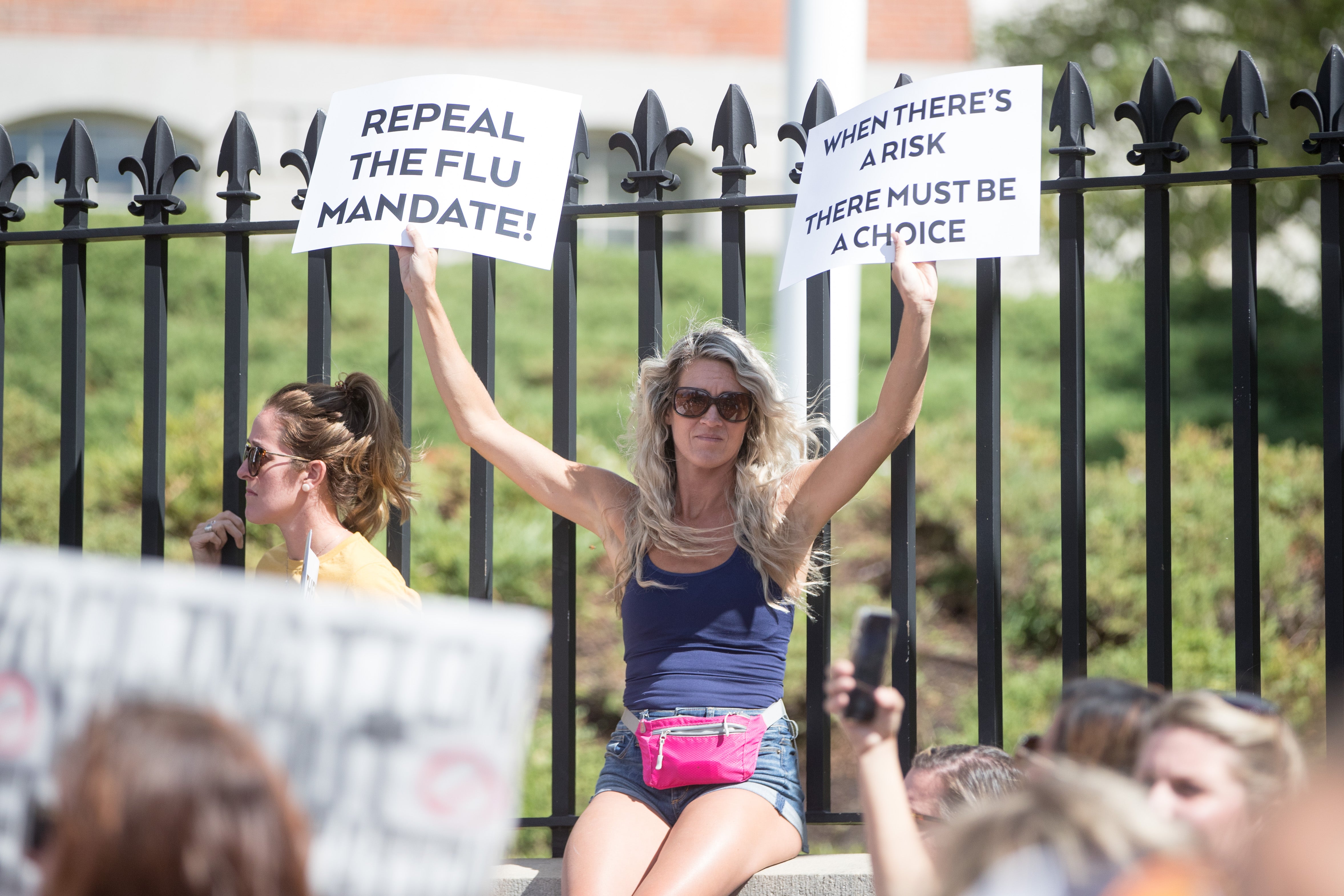 An activist protesting mandatory flu shots for students holds up signs in front of the Massachusetts State House Sunday. 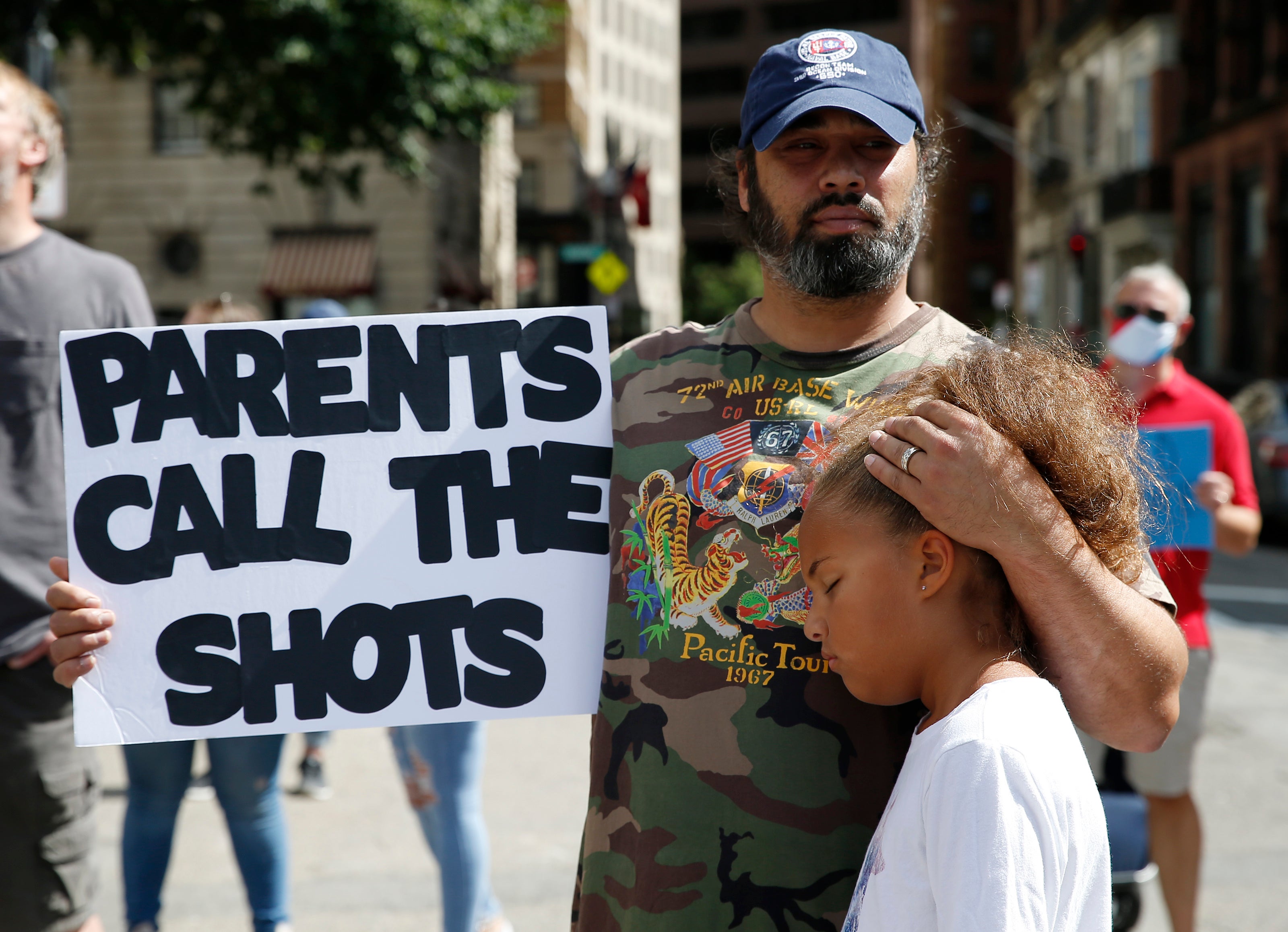 Joel Marrast of Auburn stands with his stepdaughter Olivia McAnuff, 11, during the “No Mandatory Flu Shot Massachusetts” rally outside of the State House Sunday. 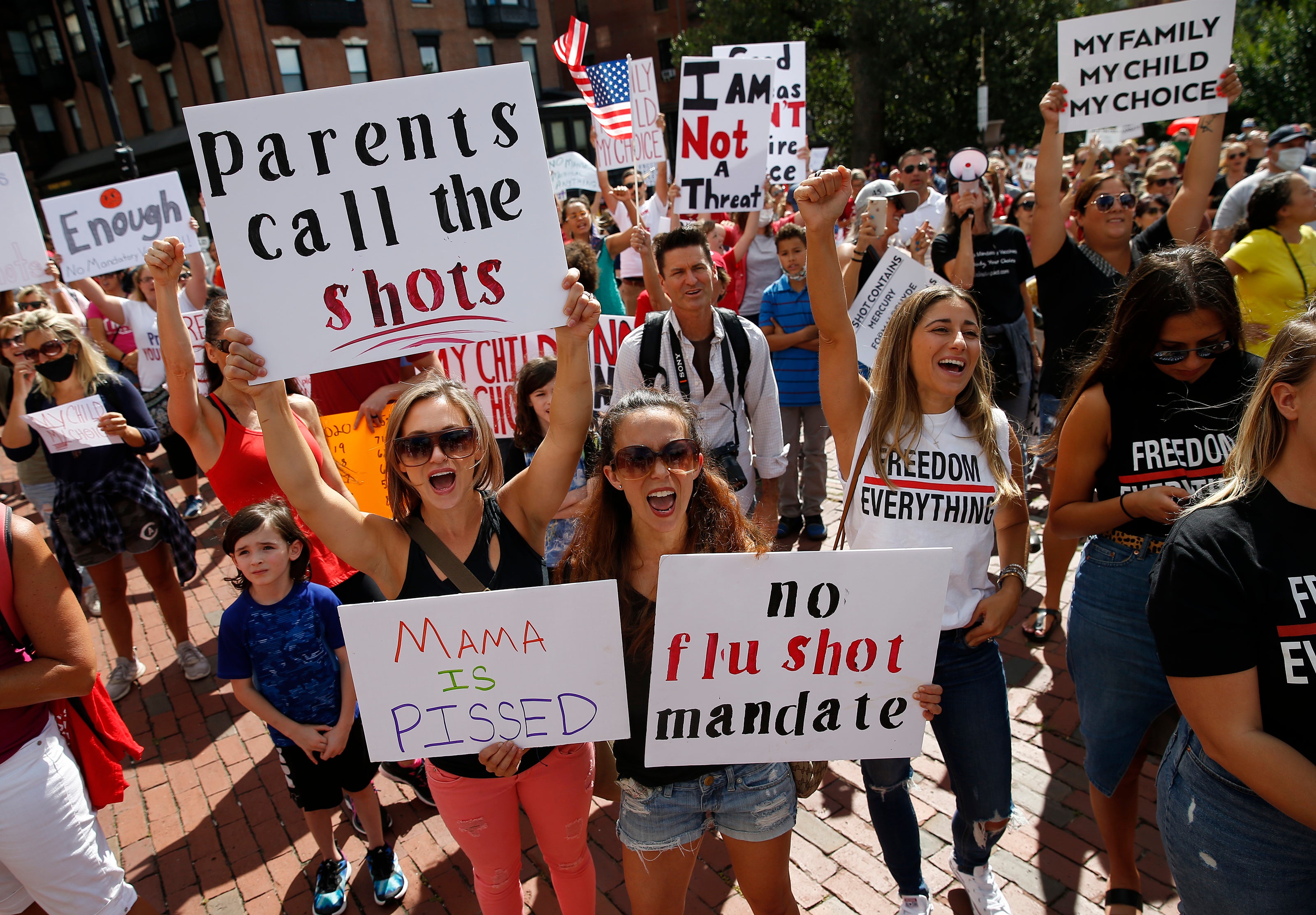 Sisters Maria Harvey and Ashley Makridakis cheer during a rally held outside of the State House to demonstrate against Governor Charlie Baker’s order for mandatory influenza vaccinations for all students. 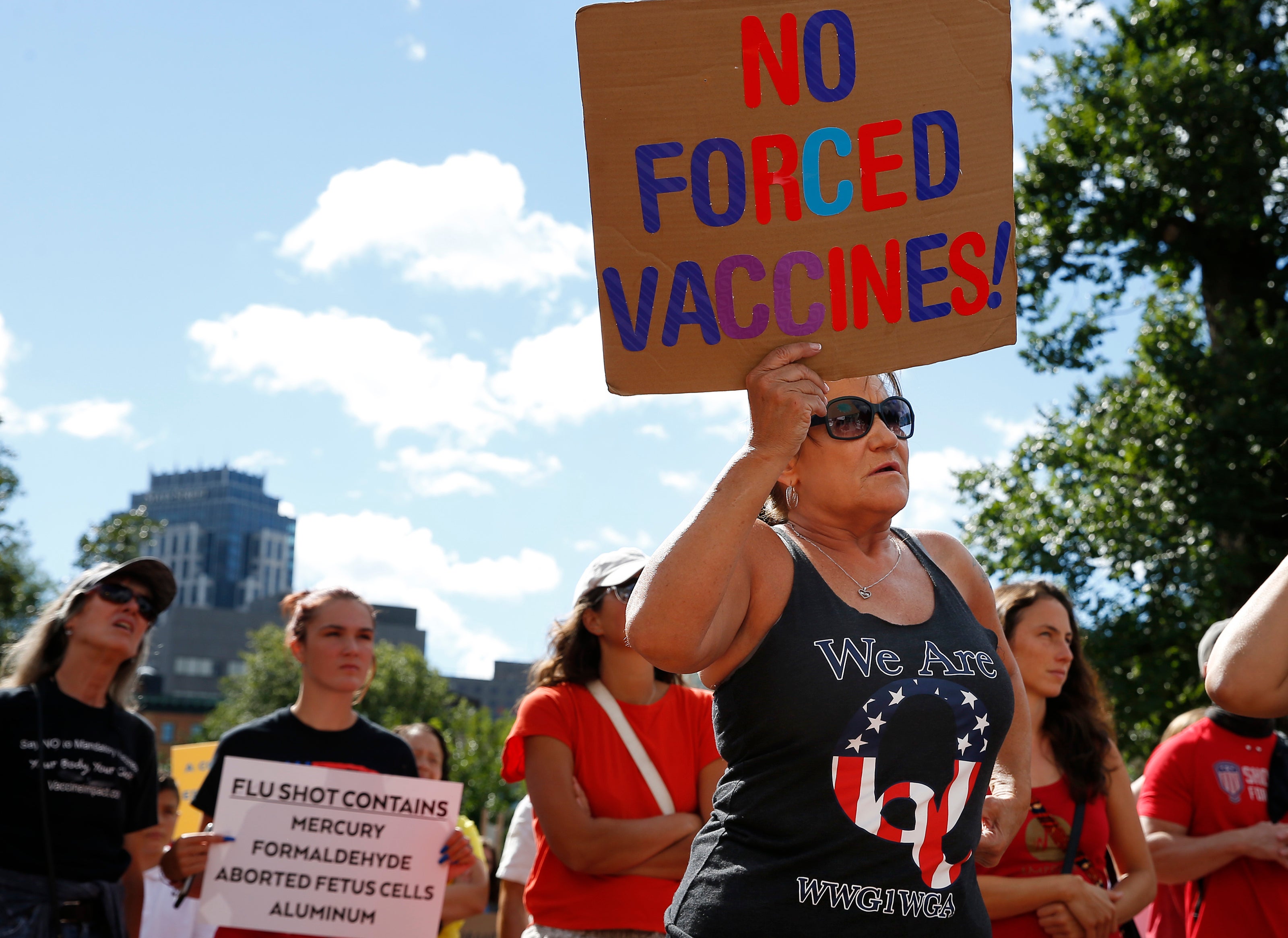 A demonstrator in a shirt touting the conspiracy group QAnon holds a sign during the “No Mandatory Flu Shot Massachusetts” rally at the State House. 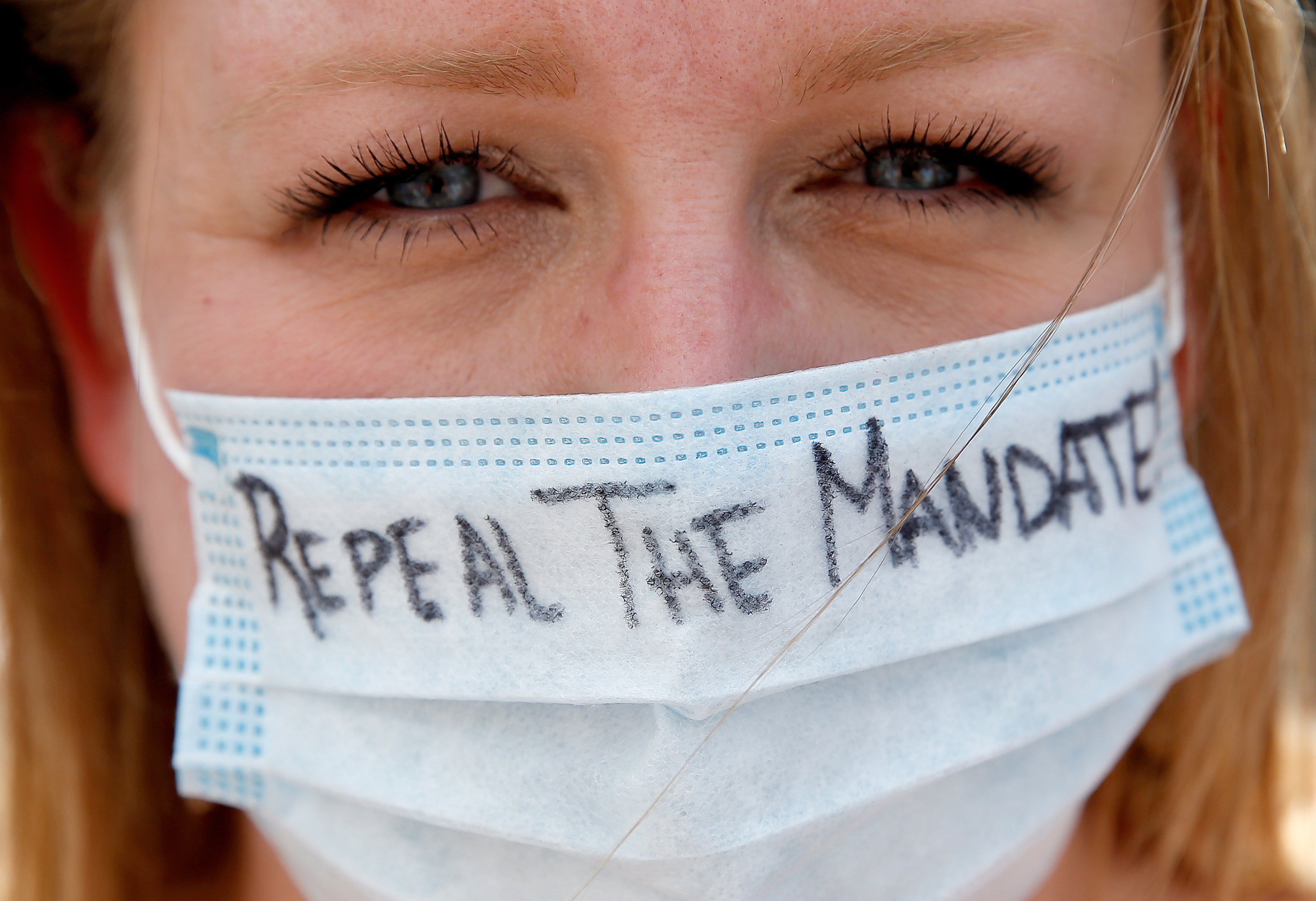 Donna Vitt of Weymouth wears a mask asking Gov. Charlie Baker to “Repeal the Mandate” during a rally held outside of the State House to protest the mandatory flu shot. 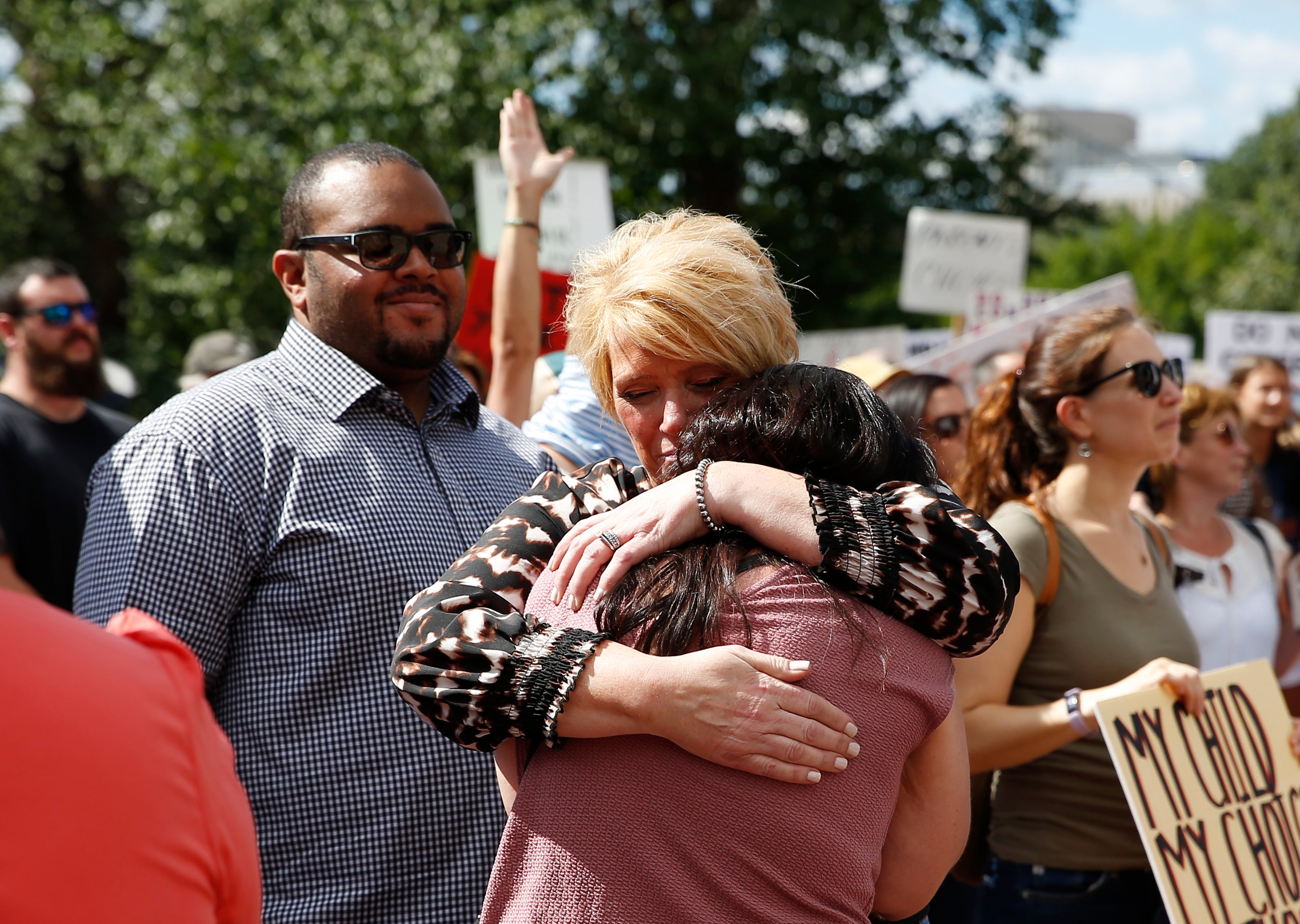 Demonstrators hug at the urging of a speaker during the “No Mandatory Flu Shot Massachusetts” rally. 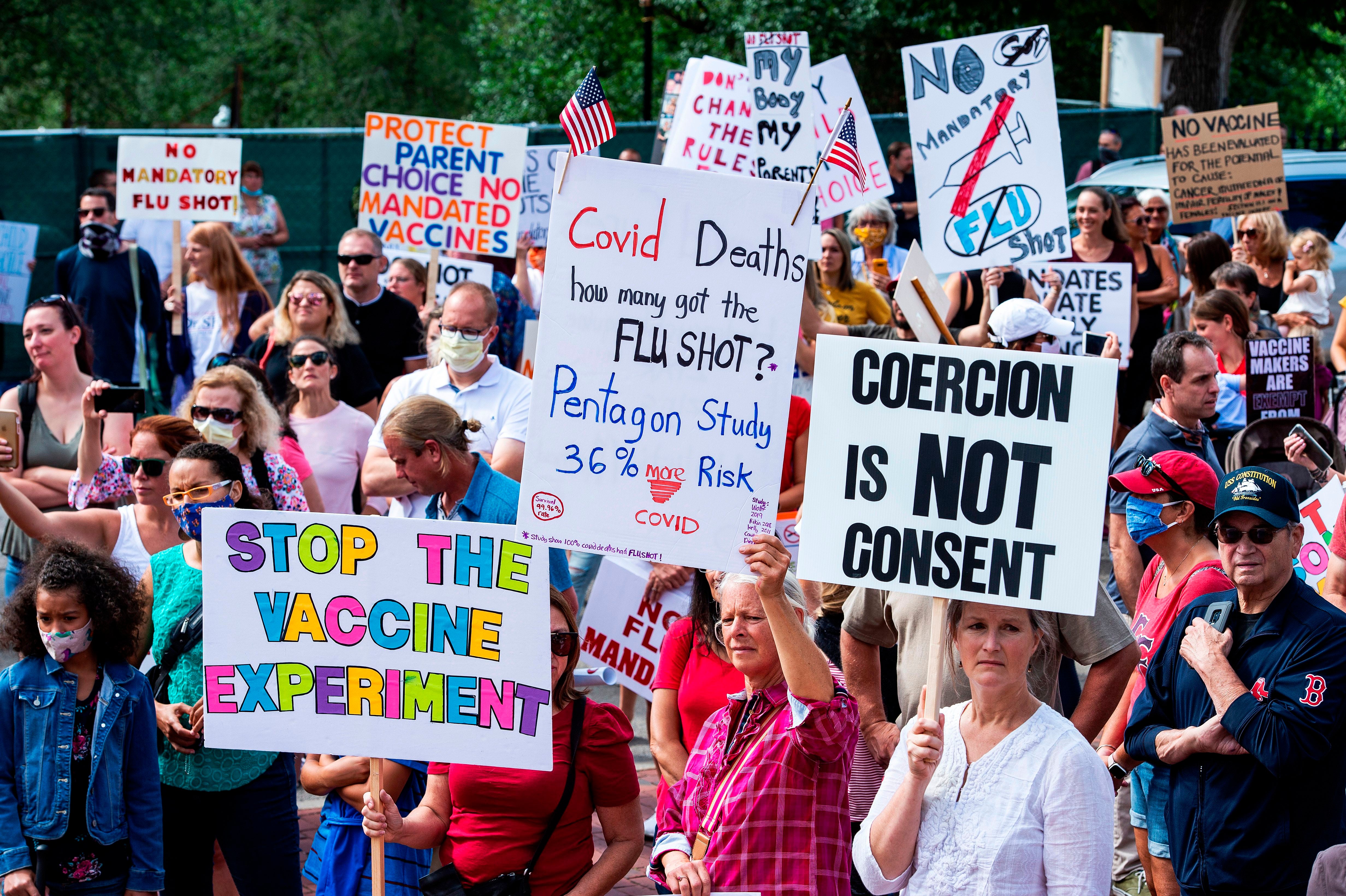 Hundreds of people of mixed political views, religions and cultures were at the State House Sunday to protest a mandate from Massachusetts Gov. Charlie Baker requiring all schoolchildren to get a flu shot. 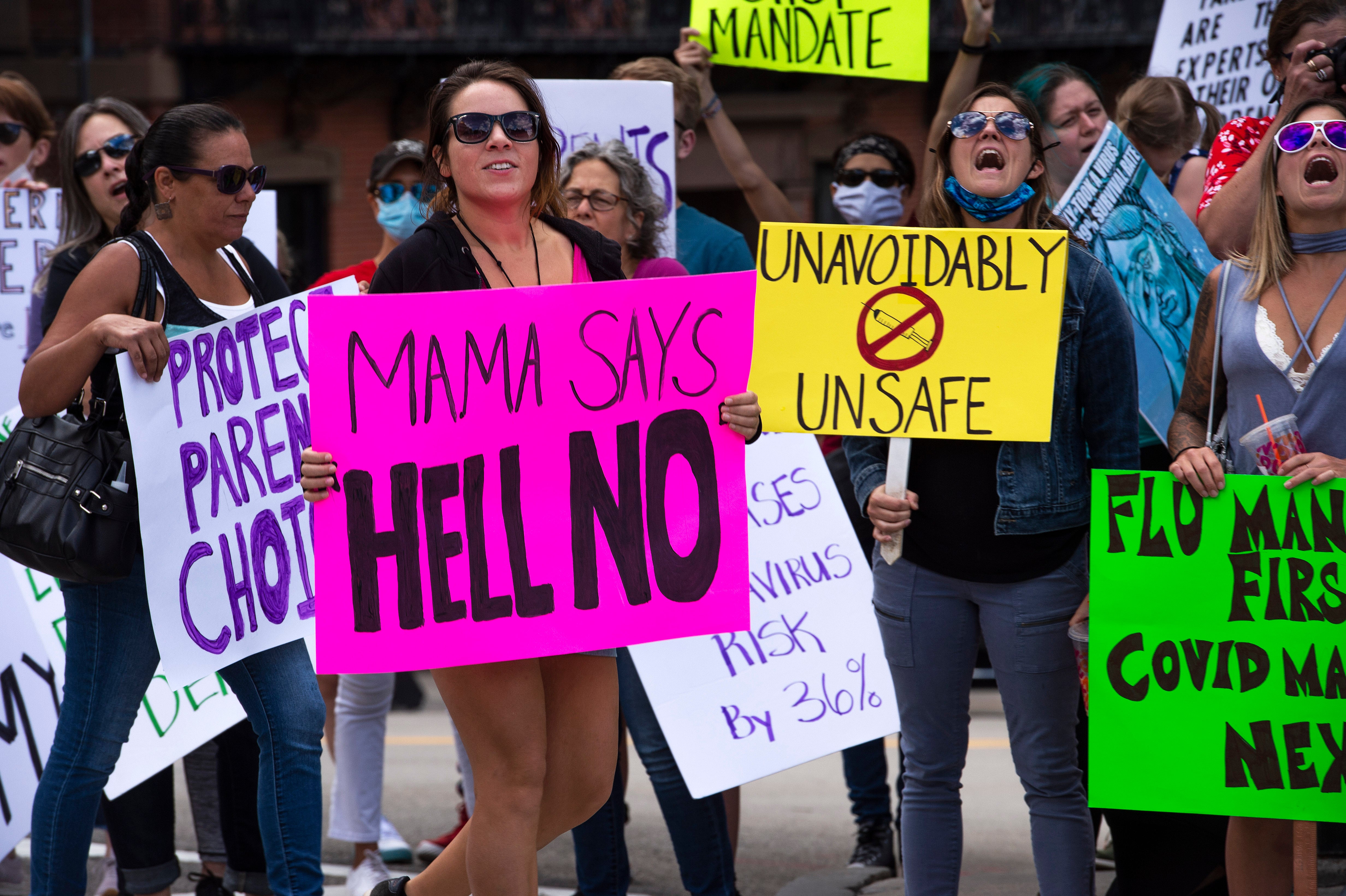 This mother had a message for Gov. Charlie Baker Sunday about the mandatory flu shot. 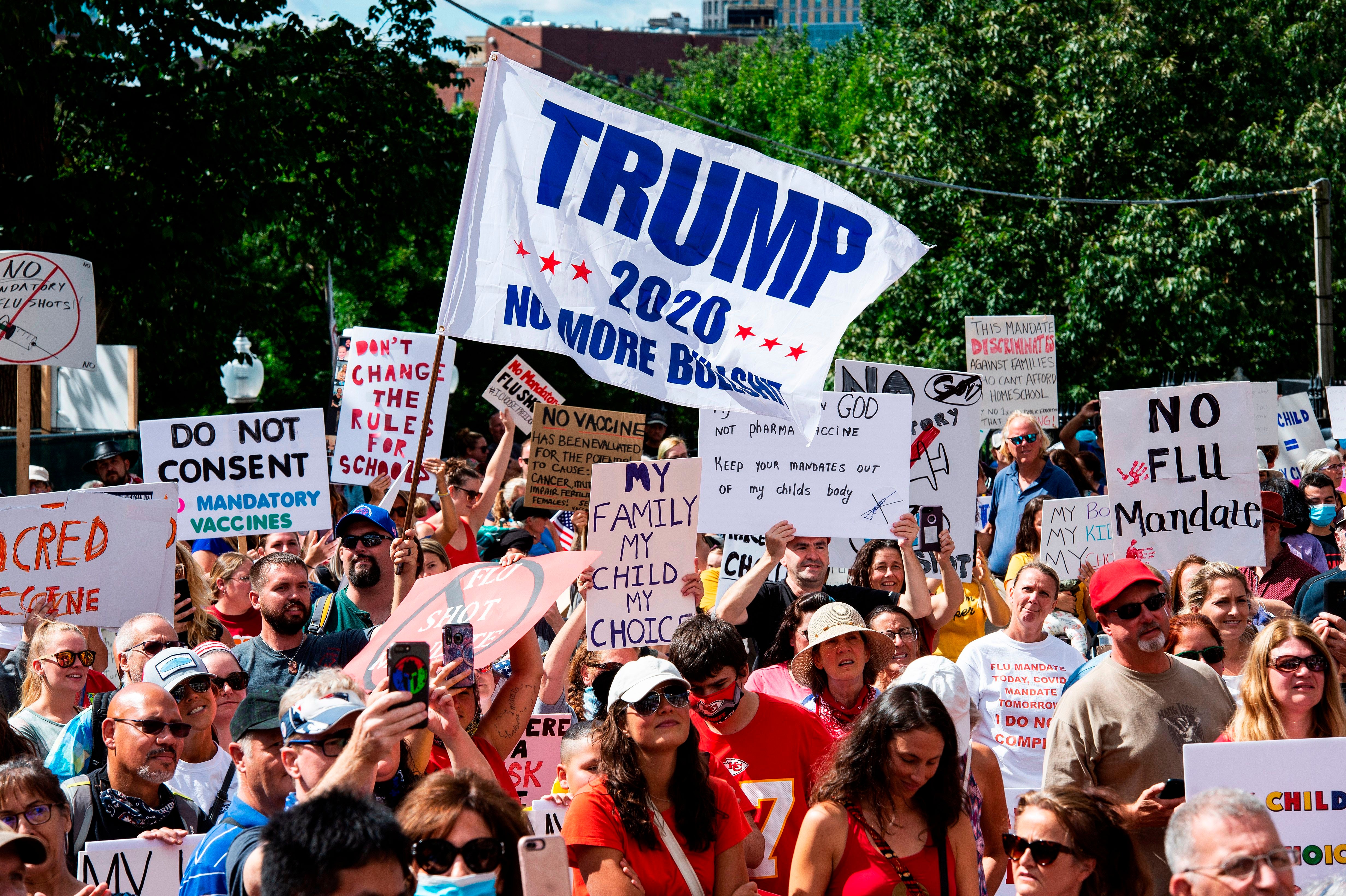 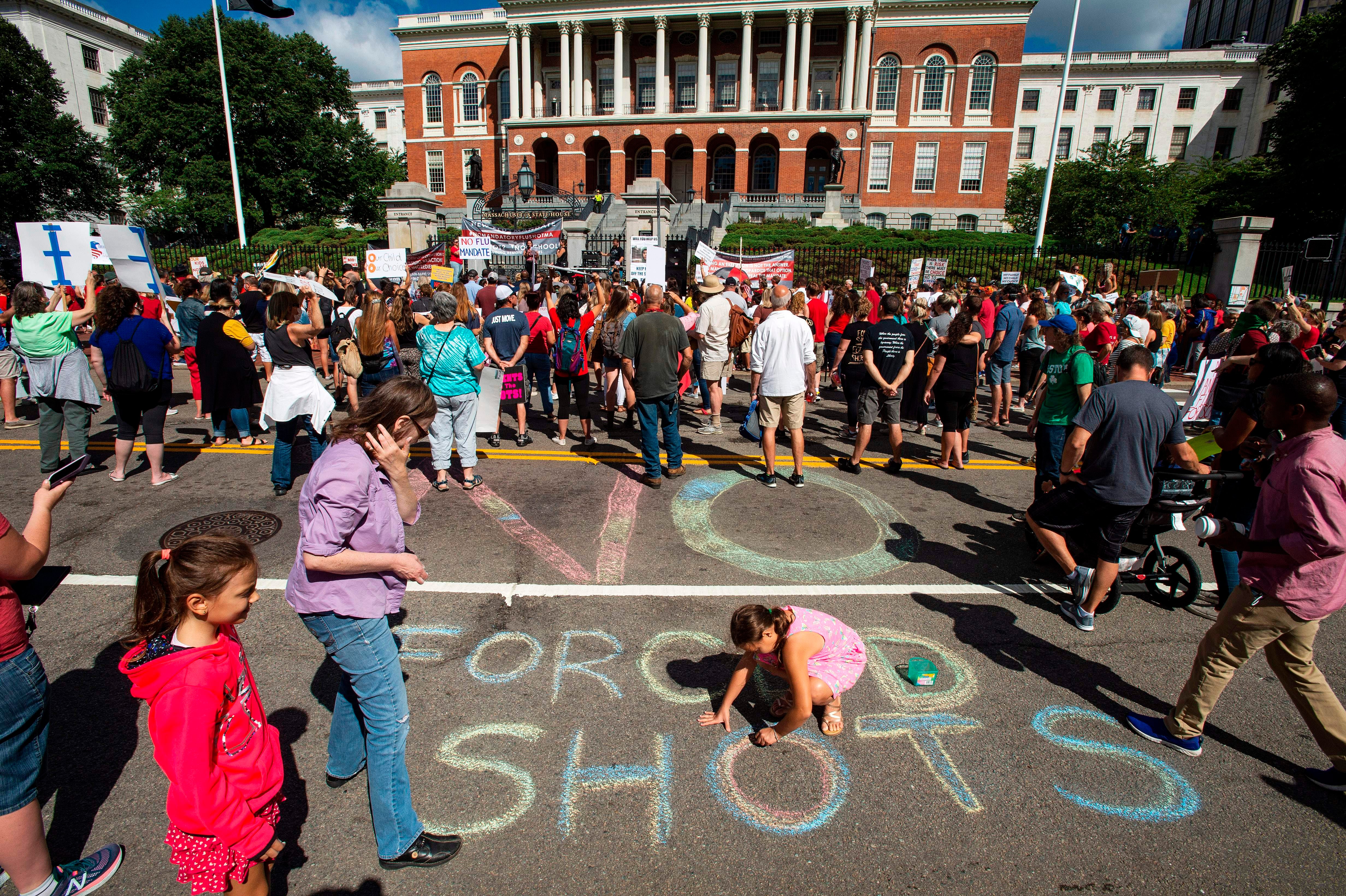 People draw a “No Forced Shots” message on the street in chalk during Sunday’s protest. 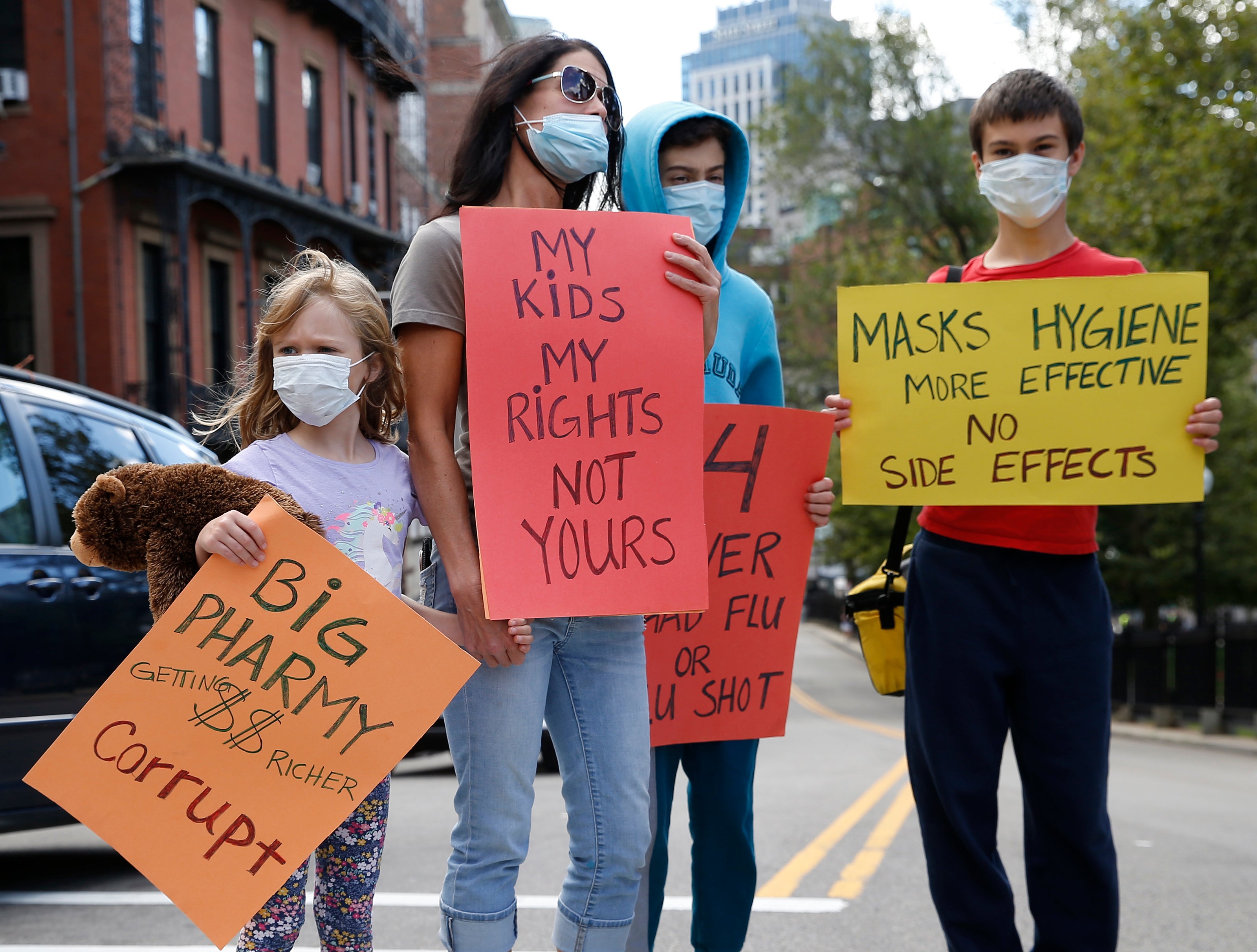 Nicole Connell of Sutton, second from left, holds the hand of her daughter Willow, 6, as she stands beside her two sons Caidon, 14, and Colton, 13, during a “No Mandatory Flu Shot Massachusetts” rally held outside of the State House Sunday. 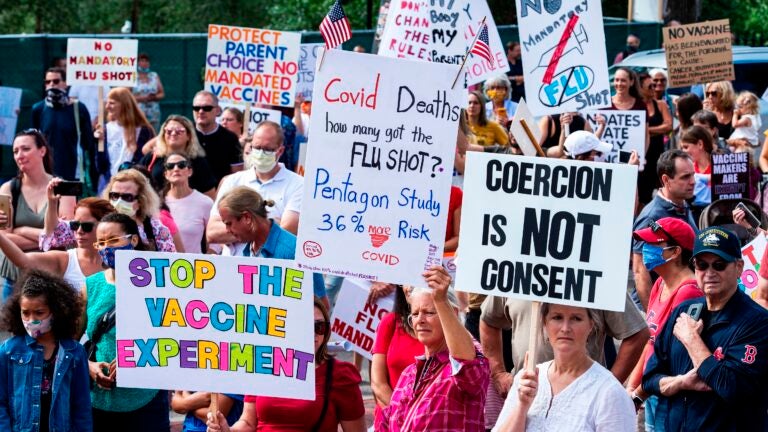