The seven-way Democratic primary to replace Rep. Joe Kennedy III in Congress is effectively down to two candidates. But it will take at least one extra day before anyone officially moves forward.

With roughly 80 percent of 4th District precincts reporting early Wednesday morning, former Brookline Select Board member Jesse Mermell and Newton City Councilor Jake Auchincloss were separated by just 0.1 percent, at 22.4 percent and 22.3 percent, respectively. However, expert and amateur vote-counters alike say that, based on the areas that have yet to report results, Auchincloss may be headed toward the nomination.

For now, the candidates themselves are urging patience, especially given the unprecedented number of mail-in ballots due to the COVID-19 pandemic.

“We always knew this race was going to be close and tonight’s early results make the race too close to call,” Mermell said in a statement around 12:45 a.m.

“The most important thing to do now is to count all the votes,” she continued. “We have preliminary figures from city and town clerks but we don’t know for sure whether those are all the votes. We have been told that clerks in several communities are still counting and reviewing mail-in votes which continued to arrive in drop boxes up until the polls closed tonight. It’s too soon for anyone to declare victory or stop counting. This is the first time Massachusetts has voted by mail and we believe there are thousands of votes still not counted. We have a responsibility to see the process through and give clerks the time to do their jobs and count the votes. With the November election looming and a President bent on twisting results, it’s important that we here set the standard and get the right result.”

Auchuncloss issued a similar statement about a half-hour later, asking for patience but also expressing confidence in the final outcome.

“While the results of our primary are being calculated, I encourage all voters and candidates to allow the process to comprehensively and lawfully unfold,” he said. “While we always expected a competitive race, we are confident that our full-district campaign will be victorious when the results are announced.”

Mermell, who campaigned as one of the more progressive candidates in the race, dominated the other six candidates in her hometown of Brookline and won with smaller margins in the neighboring suburbs of Needham, Wellesley, and even Newton. However, she lagged behind the more moderate Auchincloss — and other other candidates, too — in the district’s southern reach.

In the final weeks of the race, two candidates dropped out and endorsed Mermell — one in an explicit attempt to block Auchincloss, who worked to elect Republican Gov. Charlie Baker in 2014 and would represent a rightward shift for the district after Kennedy (who lost his Senate primary bid Tuesday against Sen. Ed Markey).

Still, the two former candidates, Dave Cavell and Chris Zannetos, both of whom dropped out weeks after local election officials began sending vote-by-mail ballots to voters, received nearly 5,800 votes, according to the preliminary results early Wednesday morning — well more than the projected margin between Mermell and Auchincloss.

But it’s unclear how candidates pulled potential votes from each other in the crowded race. Newton City Councilor Becky Grossman, who was ideologically positioned between Mermell and Auchincloss, appears slated to finish third with around 17 percent of the vote, while two more left-wing candidates Natalia Linos and Ihssane Leckey had 12 percent and 11 percent. City Year co-founder Alan Khazei also had about 9 percent of the vote as of Wednesday morning.

In the Republican primary, former Attleboro City Councilor Julie Hall won the party’s nomination to go up against the eventual winner on the Democratic side. 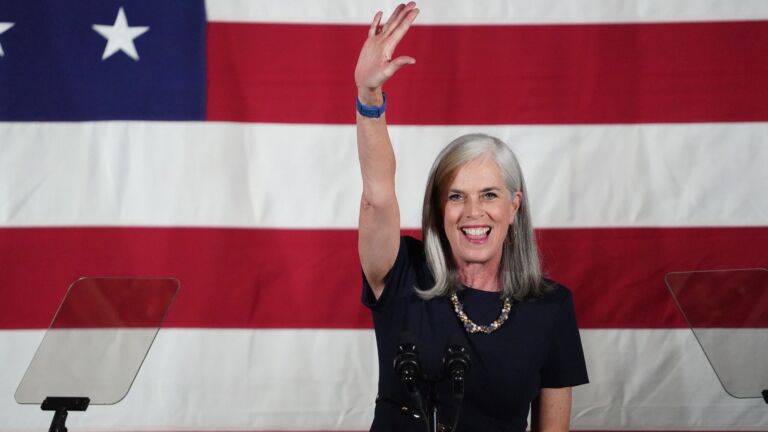