Nearly a year ago, before Rep. Joe Kennedy III even officially announced his campaign, Sen. Ed Markey had a problem.

Public polling last September showed Kennedy with as much as a five-to-one advantage among voters between the ages of 18 and 35 in a hypothetical matchup against the 74-year-old incumbent senator that was soon no longer hypothetical. Many young voters barely knew who Markey was or what he had done over his 44 years in Congress.

But the weakness was also an opportunity; more than half of voters in that age range still hadn’t made up their mind.

Markey’s campaign set out to convince them.

Fast forward 12 months later, and the previously under-the-radar lawmaker is celebrating an unprecedented feat in Massachusetts electoral history: Defeating a Kennedy. And it’s his young voters — and organizers — to whom he is giving the credit.

“This campaign has always been about the young people of this country,” Markey said during his victory speech Tuesday night. “You are our future. And thank you for believing in me, because I believe in you.”

As his campaign manager John Walsh told Boston.com, the campaign deliberately invested in an effort to bolster their presence online, where they were initially at a disadvantage to the 39-year-old congressman with a nationally known name.

There, the strategy began by highlighting Markey’s connection with New York Rep. Alexandria Ocasio-Cortez, the young, left-wing icon with whom he co-authored the Green New Deal resolution on combating climate change and shifting toward a more sustainable economy.

Ocasio-Cortez’s endorsement — just over a week before Kennedy entered the race — helped cement Markey’s progressive bonafides, even though the two Bay State Democrats had few, if any, major policy disagreements. But perhaps more importantly, she served as a gateway for younger voters who weren’t familiar with Markey to learn about his record, according to Walsh, who recalls attending the massive, youth-led climate change protest in Boston with the senator last August.

“I would concede that a significant number of the young people who came over to get a selfie with Ed — they thought he was cool because he was AOC’s friend,” Walsh said. “And then they Google him and they were like, ‘Wow, this guy led the nuclear freeze movement.’ In really touching moments, so many of them are moved by the fact that he was the leader on the cure for Alzheimer’s.”

The Boston Globe reported Tuesday that the campaign put $656,000 into an ad solely featuring Ocasio-Cortez vouching for Markey’s record as a “strong progressive champion.”

But by the end of the race, Markey didn’t necessarily need Ocasio-Cortez to speak for him. Those young supporters were doing it instead.

The stories about the army of online stan accounts (not to mention his vintage campaign ads to his retro basketball shoes) are well-told as part of the arc of how Markey stole the youth vote from his younger challenger. Polls found him with 25-percentage-point leads among primary voters under the age of 45. Walsh credits their organizing power for sealing the campaign’s victory, through their national student phone-banking program and model of “relational organizing,” in which volunteers reach out to their family, neighbors, and close community members.

“I think we’re going to find that there is a coalition for change in our country that relies on — and celebrates — a surge in young people’s participation,” he said. “There’s a whole bunch of things that happened over the last year, but I think that is the resounding message of this.”

The strategy is, in other words, “talk to your friends.” Walsh, who says he spent 2018 “plotting” former Gov. Deval Patrick’s initial plans to run for president, says relational organizing can be difficult for many candidates to scale, but results in an astronomically higher “contact rate.” From the beginning of the race, Walsh says they invested in “a digitally infused, relational-first organizing model” because they thought it was stronger and could best capitalize on their youth support.

“We go get the kids and then they get their parents,” Walsh said, quoting a remark by one of the campaign’s student volunteers.

The strategy also allowed the Markey campaign to adjust “instantly” when the COVID-19 pandemic made door-to-door campaigning unsafe beginning in mid-March.

“We started off saying our campaign is going to be person-to-person, friend-to-friend, neighbor-to-neighbor, face-to-face,” Walsh said. “So, when the pandemic hit, our model was in place. The only thing we had to do is drop off the face-to-face.”

At the same time, the pandemic robbed Kennedy’s team of what they saw as their best asset: Kennedy and his talents as a retail politician.

According to a Kennedy campaign source, they saw the race move back in their direction once they were able to resume in-person campaigning, even if it was not enough. Additionally, the pandemic — which hit just as the Democratic presidential primary was effectively wrapping up — rightly consumed both the media and public’s attention, eating into the time the Kennedy campaign’s had to invite scrutiny of Markey’s record and make a case for why he needed to be replaced.

Meanwhile, the Markey campaign’s relational organizing model hummed along, allowing the Malden native to quietly share the story of his working-class roots and develop a strong online following on the left. By the time the race did begin getting attention, “Twitter’s version of Ed Markey” had already successfully moved a lot of wealthy, white progressives away from Kennedy, according to the source.

They didn’t come back.

In the 25 municipalities with the highest college attainment, Markey won 68.8% of the vote.

In the 25 municipalities with the lowest college attainment (minus Winchendon, which hasn’t reported), Kennedy won 61.9%.#MASen #mapoli pic.twitter.com/H1T9jAqYjQ

Markey won with staggering margins in the state’s progressive centers. From suburbs like Arlington, Belmont, Cambridge, and Somerville to enclaves like Amherst and Northampton, his campaign received roughly 80 percent of the vote. In Brookline, Markey won 70 percent of the vote; in Boston, he won nearly 60 percent. Markey even won Kennedy’s home town of Newton by nearly 30 percentage points.

To some degree, Kennedy did what his campaign knew he had to do in the final weeks: winning working class, disproportionately nonwhite cities like Lawrence, New Bedford, and Taunton with around 70 percent of the vote. He took Springfield, the third biggest city in Massachusetts, with 63 percent of the vote — and narrowly won Worcester, the state’s second largest city.

Still, it wasn’t enough to offset Markey’s towering margins in the more affluent suburbs and elsewhere.

During his concession speech, Kennedy argued that his coalition was “the Democratic Party’s future.”

But at least in Massachusetts this year, Markey’s coalition proved to be the present. And with his youth support, the senator can also claim an “intergenerational” coalition for the future.

“This election is an undeniable mandate for action,” Markey said Tuesday night. “And it is our young people who will lead the way.” 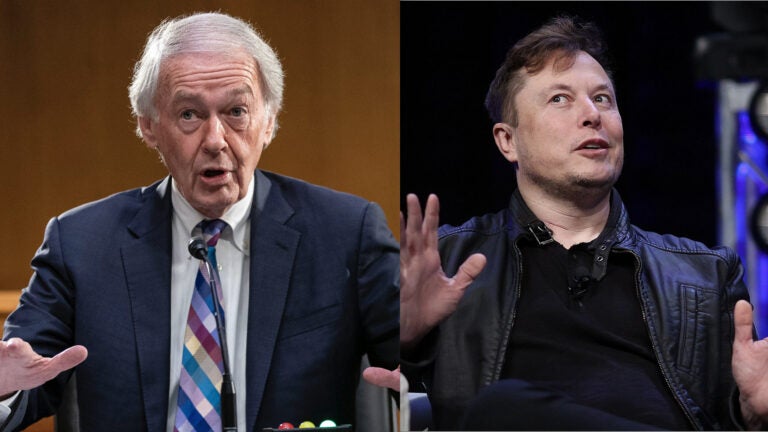