Is Michelle Wu running for mayor?

Right now at least, the answer depends on who you ask — including the man who holds the office currently. But it isn’t a definite “No.”

Wu, the 35-year-old city councilor at-large from Roslindale, called Mayor Marty Walsh on Sunday to inform the incumbent she plans to run in next year’s election, Walsh told The Boston Globe Monday.

The report, coming less than a week after a contentious U.S. Senate primary, sent the state’s political universe into a frenzy, as it seemingly affirmed what many have speculated about Wu’s aspirations over the past year.

Wu has built out her platform lately: leading a campaign to make the T fare-free and fight fare hikes, seeking to abolish the Boston Planning & Development Agency, and, most recently, releasing a vision for a Green New Deal for Boston, to take on the coming impacts of climate change and the coronavirus pandemic, especially racial disparities.

However, while Wu hasn’t confirmed any intention to seek the city’s chief executive role, she hasn’t denied it either.

“Councilor Wu believes that in this moment of hardship in our city, each one of us should be asking ourselves how we can make a difference in strengthening our communities and fighting for change that matches the scale and urgency of our current challenges,” Jessicah Pierre, a spokesperson for Wu, said in a statement to the Globe.

On Monday night, the city councilor played off the energy spurred by the report, posting a picture of her two children and writing on Twitter: “I want you to hear it from me……..Cass has now switched his fav flavor from strawberry to mint chocolate chip.”

I want you to hear it from me…
.
.
.
.
.
Cass has now switched his fav flavor from strawberry to mint chocolate chip @No_1_icecreaman pic.twitter.com/72gZIwYZr3

A Chicago native, Wu was first elected to the council in 2013, before becoming the first woman of color to serve as council president two years later. She easily secured re-election last year after picking up more votes than any other candidate on the ballot.

A profile in The Atlantic in April 2019, called Wu “one of the city’s most effective politicians” and wondered aloud: Is Wu the next mayor of Boston? (“I’ve learned I can’t really affect or control what journalists write,” Wu told Boston.com a month later.)

The speculation about a potential mayoral run was bolstered not only through some of the progressive stalwart’s sweeping policy proposals, but also in the areas where she and Walsh have butted-heads.

Last month, the council rejected Walsh’s three nominations for the Zoning Board of Appeal at the recommendation of Wu, who helms the Committee on Planning, Development, and Transportation. Candidates for the board had sat for months in committee as Wu called for answers regarding a bribery scandal involving a BPDA staffer.

In June, as Walsh unveiled plans to take on systemic racism in the city, Wu offered sharp criticism of the city’s Racial Equity Fund — created to help invest in nonprofits that work to empower communities of color — and the Boston Resiliency Fund — the city’s COVID-19 response fund.

“Philanthropy in moments of crisis is not a substitute for building resiliency and investing in equity,” she added.

And in July, Wu said the resiliency fund creates “conflicts of interest.”

Wu has also increased campaign spending lately. Last week, Politico reported Wu spent over $43,000 in August on various campaign expenditures such as emails, a digital ad buy, video production services, and candidate research. At the beginning of the month, Wu had $346,000 in her war chest.

The mayor faced criticism in the wake of Monday’s Globe report, with some saying Walsh stepped on Wu’s toes in revealing her mayoral run.

Walsh, during a coronavirus updates press conference Tuesday, said he did not contact the newspaper with a scoop.

“A reporter from the Globe asked me the question if I had received a call,” he said. “He had heard that I got a call from the councilor and I just confirmed I did.”

Asked why he decided to weigh in, Walsh responded, “When I say, ‘No comment,’ to you guys and I know the answer, it’s pretty not fair to do.”

As for his own thoughts on the 2021 city elections, Walsh said he is focused on “running the city and seeing us through the COVID-19 crisis.”

“My job right now is focusing on being the mayor of the City of Boston and when I’m not on duty as being mayor, my job is working to elect Joe Biden and Kamala Harris as the president and vice president of the United States of America,” he said. “We need an administration in Washington, as you can see, that we can work with for the next four years, unlike the current one that’s in there today.” 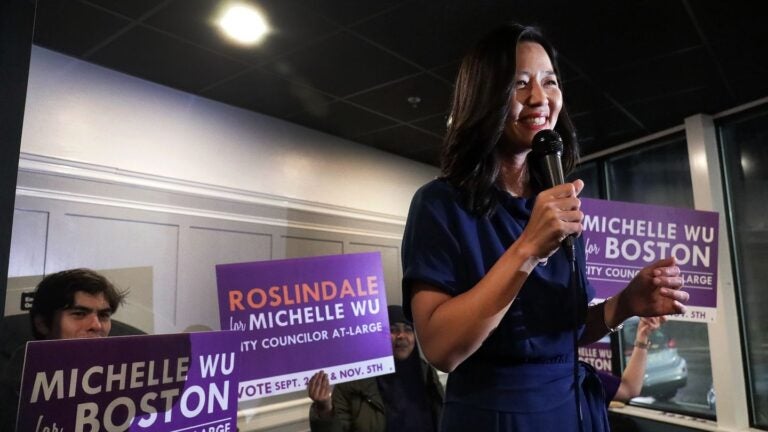