Don’t just take Marty Walsh’s word for it: Michelle Wu says she is running for mayor of Boston.

The 35-year-old city councilor made it official Tuesday, setting up a long-rumored 2021 race against Walsh, a fellow Democrat who has indicated he plans to run for a third term as mayor.

In a press release announcing her mayoral campaign, Wu said that Boston needs “leadership that matches the scale and urgency of our challenges,” citing the health and economic impacts of the COVID-19 pandemic, as well as the recent movement to address systemic racism, which have highlighted preexisting economic and racial inequalities in the city.

“Business as usual has been failing Bostonians since well before the pandemic, and COVID-19 has exposed and exacerbated deep inequities across our city,” Wu said. “In this moment of crisis, it’s not only possible but necessary to reimagine community-based leadership with the vision and conviction to act.”

The announcement Tuesday came with a two-minute campaign launch video narrated by Wu in three languages: English, Mandarin, and Spanish.

The official rollout comes a week after Walsh broke the news of Wu’s mayoral bid, confirming that the at-large councilor called to inform him of her plans after a Boston Globe reporter called to ask about the rumor over the Labor Day weekend. Wu’s campaign also filed papers Monday with the Massachusetts Office of Campaign and Political Finance indicating that she planned to run for mayor, Politico first reported.

Wu, a first-generation Taiwanese-American and the first woman of color to serve as Boston City Council president, has championed ambitious proposals like eliminating MBTA fare and overhauling Boston’s real estate planning agency. She has also become an increasingly vocal detractor of Walsh from the left, criticizing the city’s recent police reforms for not going far enough; speaking out against its use of privately financed funds in response to the COVID-19 crisis and racial inequity; and leading an effort to block three nominees to the city’s Zoning Board of Appeals (ZBA).

After Walsh suggested Wu was playing “politics” with the ZBA nominees, she responded with a scathing opinion piece in the Globe blasting the city’s development process — and the mayor.

“When it comes to fighting for progress in Boston, there’s a long history of people in power trying to label advocacy and hard work as being political in order to avoid accountability and distract from community demands for better leadership,” she wrote.

According to her campaign, Wu has authored “more than half” of the legislation passed by the City Council since the Chicago native, who moved to the Boston area to attend Harvard, joined the council in 2014 — the same year Walsh was first elected mayor. The bills include an ordinance providing six weeks of paid parental leave for city workers, a single-use plastic bag ban, regulations on short-term rentals and lobbyists in the city, and a prohibition on face surveillance technology by law enforcement.

Those measures were all signed into law by Walsh, though Wu feels the city should be taking larger strides.

Last month, Wu also unveiled a sweeping “Boston Green New Deal and Just Recovery” plan, outlining how the city could become more resilient to climate change in the wake of the COVID-19 pandemic. The proposal would accelerate the city’s plans to become carbon neutral, create an employment program in the green energy space, and guarantee counsel for residents facing eviction.

“We can build wealth in all our communities, value public education, plan for our neighborhoods, invest in housing we can afford and transportation that serves everyone, truly fund public health for safety and healing, and deliver on a city Green New Deal for clean air and water, healthy homes, and the brightest future for our children,” Wu, a Roslindale resident, said in her statement Tuesday.

Walsh hasn’t officially announced plans to run for a third term. But during an interview Friday on GBH’s “Boston Public Radio,” the Dorchester resident said he does not plan to “give up” on the city and has “a lot more to do.” Walsh mostly said it was too early to talk about 2021, citing the still-pressing COVID-19 crisis, the reopening of schools in the midst of the pandemic, and the 2020 presidential election this November.

A woman has never been Boston’s mayor in the nearly 200-year history of the office. The last time an incumbent Boston mayor lost his bid for reelection was 1949.

“I respect Councilor Wu,” Walsh said Friday. “She started in the City Council the same time that I did as mayor. She’s been a supporter of a lot of what the administration has done, and I think that’s enough said about that.” 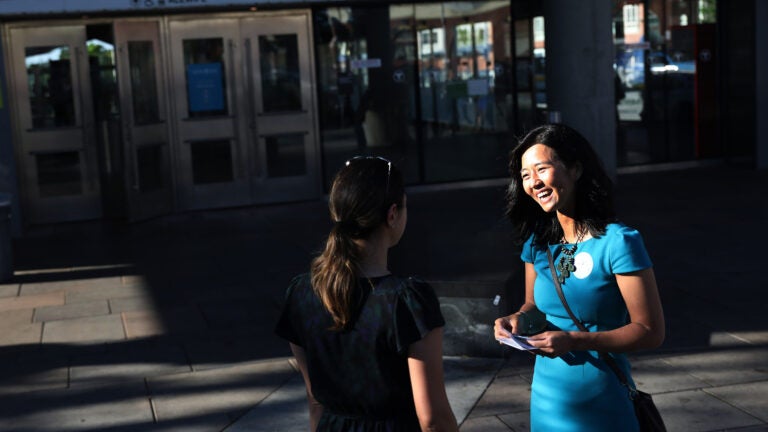 What we know about Michelle Wu’s possible mayoral run