Sen. Elizabeth Warren has said in the past that she had warmed to the idea of ranked choice voting.

Now, she’s fully on board.

Ahead of a Massachusetts ballot question this fall that proposes to implement ranked choice voting, the state’s senior senator published an opinion piece Friday in The Boston Globe endorsing the alternative voting system along with Maryland Rep. Jamie Raskin, a fellow Democrat who has proposed the reform at the national level.

“To defend our democracy, we need to fortify it,” Warren and Raskin wrote.

“One way is by strengthening the principle of majority rule while defending and protecting the rights of all individuals, including those in the minority,” they continued. “Massachusetts voters have a chance to do just that in November by approving ranked-choice voting on Question 2.”

Question 2 would implement ranked choice voting in all state and federal races — including primary and general elections — in Massachusetts (though not for the presidential or municipal elections) beginning in 2022.

Under the system, voters can rank candidates on the ballot in order of their preference (first choice, second choice, third choice, etc.) and the winner is required to get at least 50 percent of the vote. If no one reaches the 50 percent threshold after voters’ first-choice picks are tallied, the candidate with the least first-choice votes is eliminated and their votes are reallocated based on who their supporters ranked as their second choice. The ballots are then recounted and the process is repeated until one candidate surpasses the 50 percent threshold.

“By requiring the winner to reach more than 50 percent of the vote, ranked choice voting ensures the winning candidate is the one with the broadest appeal to the majority of voters,” Warren and Raskin wrote Friday. “The ability to mobilize the broadest and deepest appeal across the electorate would replace the ability to target a passionate minority constituency, which may be extreme or nonrepresentative from the standpoint of most voters as the key to winning.”

Warren joins fellow Massachusetts Sen. Ed Markey, as well as six of the state’s nine House members, in support of Question 2. Four members of the delegation have also signed onto Raskin’s bill to require all states to implement ranked choice voting.

Maine became the first state in the country to use the system for statewide and federal races in 2018, and — in addition to Massachusetts — Alaska is also set to vote on a similar measure this fall.

Cambridge, where Warren lives, has also used a form of ranked choice voting in its multi-winner city council and school committee elections for decades.

Warren’s public support comes less than a month before early voting begins in the Nov. 3 election with recent polling showing many voters undecided on Question 2. The initiative comes after a pattern of crowded Democratic primary races producing a winner who received less than a quarter of all votes.

According to Warren, ranked choice voting solves that issue. Warren also pointed to evidence suggesting that it results in more civil campaigns, since candidates can vie to be the second or third choice of their opponents’ supporters. And she responded to concerns about so-called ballot exhaustion, in which voters do not rank all the candidates.

“For everyone who worries that they won’t know enough about every candidate to rank multiple candidates, they can leave the other options blank,” Warren and Raskin wrote. “If that voter’s choices don’t make it into the final round, then that voter is no worse off under RCV than under the current system.” 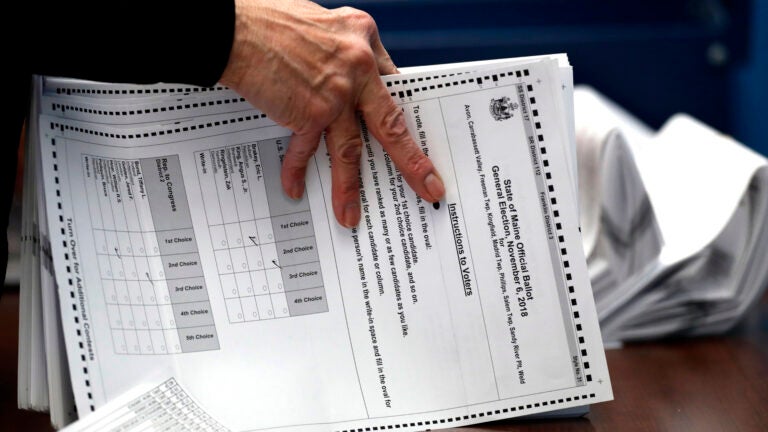