Following the death of Supreme Court Justice Ruth Bader Ginsburg, Sen. Ed Markey was quick to draw battle lines in what is set to be an extraordinarily contentious political clash this fall over replacing the liberal judge.

In tweets, statements, and speeches over the weekend, Markey called on Sen. Mitch McConnell, the Republican majority leader, to follow the “precedent” he set in 2016 when he blocked President Barack Obama’s nomination of Judge Merrick Garland to the Supreme Court based on the reasoning that it was an election year.

But if Republicans disregard that principle and fill Ginsburg’s seat with President Donald Trump’s soon-to-be announced nominee, the Massachusetts Democrat said his party “must abolish the filibuster and expand the Supreme Court” if they regain power.

Scroll down or click here to take our poll on how the Democrats should respond to GOP efforts to replace Ruth Bader Ginsburg.

Markey may have gotten ahead of his fellow Democrats —including Joe Biden, the party’s 2020 presidential nominee.

According to The Washington Post, some members of Biden’s campaign expressed “particular annoyance” with Markey for floating the idea of expanding the court, as the former vice president made a speech Sunday urging swing-vote Republican senators not to confirm a nominee until “the voices of the American people” are heard. Per the Post‘s report Sunday:

Rather than weighing in on such ideas, Biden stressed less-polarizing issues — noting that a new conservative justice could threaten the Affordable Care Act, which currently faces a challenge before the Supreme Court, and strip away health-care protections during a pandemic. It was part of a synchronized message on the court and the ACA with top Democratic leaders on Capitol Hill. A Biden aide said both sides were in touch and would be coordinating regularly.

Some on Biden’s team have been aggravated by the calls on the left to expand the court, expressing particular annoyance with Sen. Edward J. Markey (D-Mass.) for urging Democrats to abolish the filibuster and add more justices if Senate Republicans move to fill the vacancy.

“People in your own party shouldn’t cause you problems 44 days out,” said one adviser, who like others spoke on the condition of anonymity to be candid.

The Malden native appears to be the only senator to express immediate support for potentially expanding the Supreme Court if Republicans rush through a nominee in the midst of the presidential election. Markey was also the first, and his tweet roughly an hour after the news broke of Ginsburg’s death was shared nearly 50,000 times.

Mitch McConnell set the precedent. No Supreme Court vacancies filled in an election year. If he violates it, when Democrats control the Senate in the next Congress, we must abolish the filibuster and expand the Supreme Court.

“Next January, when the Democrats win the Senate and we win the presidency, then we must abolish the filibuster and we must begin a process to expand the Supreme Court, because the Republicans will have stolen two Supreme Court justices,” Markey reiterated during a press conference Sunday morning in Boston.

But he was hardly alone; several House Democrats also suggested it was a possibility over the weekend, including Rep. Jerry Nadler, the chair of the Judiciary Committee, and outgoing Rep. Joe Kennedy III, who unsuccessfully challenged Markey in this year’s Senate primary.

As the Post noted Sunday, the Constitution does not require a specific number of Supreme Court justices, which ranged between five and 10 before settling on nine in 1869. However, the idea of “court packing” has been stuck with a negative connotation since President Franklin D. Roosevelt unsuccessfully tried to expand the Supreme Court in 1937, after the current justices rejected many of his New Deal programs.

Progressives fear the current conservative majority on the Supreme Court — especially if Ginsburg is replaced by a Trump nominee — would likewise block much of their modern-day agenda, including any climate change legislation modeled around Markey’s trademark Green New Deal resolution.

As presidential candidates, Sens. Kamala Harris, Kirsten Gillibrand, and Elizabeth Warren also expressed openness to some sort of Supreme Court reform — but have been silent on the subject in the wake of Ginburg’s death. Harris, the Democratic vice presidential nominee, pledged to fight for the liberal icon’s dying wish to “‘not be replaced until a new President is installed.”

Biden — who has opposed both the elimination of the filibuster and expanding Supreme Court — called on Republicans during his speech Sunday to stem the intensifying dispute before it gets to that possible point.

So far, two GOP senators have said they oppose a confirmation vote before a new president is elected, which is not enough (Democrats need four GOP members to break ranks to block a nominee).

“We need to de-escalate, not escalate,” Biden said during his speech Sunday in Philadelphia.

“That’s why I appeal to those few Senate Republicans, the handful who really will decide what happens,” he said. “Please follow your conscience. Don’t vote to confirm anyone nominated under the circumstances President Trump and Senator McConnell have created. Don’t go there.”

Share your thoughts on how the Dems should respond in our poll below: 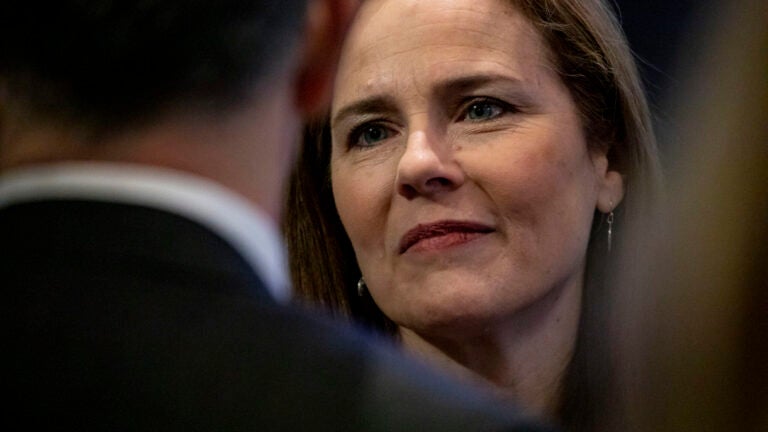 Who is Judge Amy Coney Barrett? What to know about the leading contender to replace Justice Ruth Bader Ginsburg.