When Ruth Bader Ginsburg died of pancreatic cancer Friday at age 87, it quickly became clear that the GOP-controlled Senate would try to fill her Supreme Court seat prior to the Nov. 3 election — despite having blocked Barack Obama’s election-year nominee Merrick Garland back in 2016.

In fact, judging from the alacrity with which Senate President Mitch McConnell released a statement indicating his intention to hold a vote this year, it’s reasonable to assume that he had his finger hovering over the “send” button since sometime in 2017.

Meanwhile, Massachusetts Sen. Ed Markey also wasted no time suggesting what should happen next, if (and it’s a big “if”) Democratic presidential candidate Joe Biden wins and Democrats manage to regain control of the Senate:

Mitch McConnell set the precedent. No Supreme Court vacancies filled in an election year. If he violates it, when Democrats control the Senate in the next Congress, we must abolish the filibuster and expand the Supreme Court.

The idea of “packing the court” — in which the party in charge expands the size of the Supreme Court and appoints ideologically friendly judges — is not new: FDR tried to float a plan to do so back in 1937, in fact. But it’s never been what you’d call a mainstream suggestion.

In today’s fractured political climate, though, the idea is starting to build up steam on the left — even as Markey’s rush to propose it has reportedly raised hairs among the campaign team for Biden, who, rather than making threats, instead opted to make an appeal to Republicans senators’ moral conscience. That’s not going so well.

But what of Boston.com readers? We asked, “If the Senate votes to approve Trump’s appointee to the Supreme Court prior to the election, should Dems respond by expanding the court if they gain control?” With more than 500 responding, 57% of respondents thought that would be taking things a step too far.

Of course, 56% is not what you’d call an overwhelming majority — a sizable 41% declared that “all bets are off” and that it’s time to play hardball, norms be darned. And 2% offered “Other” options, ranging from such extremes as “Jail Trump on his way out the door” to Dems are pathetic and weak, as one reader wrote.

About 100 of you also offered more detailed specifics as to what you think should happen next, and how. Here’s a sampling of those responses:

“The fact that the Republicans are playing ‘no holds barred’ politics means the Democrats need to respond in the same manner.”

“Go with statehood for D.C. and Puerto Rico, review the two-senators-per-state concept and consider expanding for states with over X population.”

“Expand the court and put a muzzle on Markey.”

“Scorched earth. Burn it all to the ground.” — Ryan, Medford

“Obstruct, delay, condemn as much as legally possible.”

“I am an independent but almost always vote Democratic. But if the Republicans push through this appointment I will never vote for a Republican ever again no matter how qualified they might be. I am truly convinced that the Republican Party is only concerned about their own political gains and could care less about the needs and wants of the American people as a whole.”

“Expand the court! End the filibuster. Day one.”

“If the Democrats/progressives sweep the election they should drop the filibuster, expand the Supreme Court to at least 15 justices, and then admit Washington, D.C. and Puerto Rico as the 51st and 52nd states.”

“The courts generally have too much power over legislative remedies in this country. In general the court should be reined in. What the Republicans have engaged in the last few years is court packing. No one should be surprised if Democrats respond.”

“Any and all actions necessary. Impeach Trump, impeach Barr, expand the court. The Republican Party is destroying America and they are in the minority. If the Democrats don’t take a hard stance and fight back it may eventually lead to something far more destructive. They must not give and they must make it clear that the [Republican] scorched-earth strategy will be met with greater force.”

“By executive order; President Biden should nullify the appointment. He has the power, he needs to use it.” — Denis, Harvard

“Put forward another impeachment inquiry to tie up the Senate and thus block the Supreme Court nomination process.”

“Since it appears that politics = corruption, Democrats should hit Republicans with as much aggression and realistic, hostile strategies as possible. Especially among Republicans there doesn’t seem to be a shred of ethics, honor, or morality in our federal officials, only the lust for power. If we fall, it will be from within.”

“Suck it up. Don’t change the rules.”

“The only reason there wasn’t a nomination in 2016 is because the GOP controlled the Senate. A confirmation wouldn’t have happened anyway with the Senate controlled by the GOP. So Obama could’ve tried but would’ve failed in 2016. There is no unspoken rule for election-year nominations. It basically falls on whether or not the sitting president’s party controls the Senate. And the GOP has it in 2020. If the Democrats controlled the Senate in 2016 you’d be a fool to think they wouldn’t have pushed through an election-year nomination.”

“Someone famously said, ‘Elections have consequences.’ We Americans elected DJT [Donald J. Trump] and a Republican Senate to ACT in just this situation. Replace Ginsburg with an intelligent, moral, conservative, experienced originalist before a potential constitutional crisis occurs on Nov. 3 so SCOTUS can effectively provide a resolution.” — SF, South Shore

“The president is the president for four years, and there is always another vote coming up. Yes, I know the Republicans did it four years ago on Obama, and they weren’t fair then, either. But, regardless, Obama still put his candidate forward.”

“Elections have consequences. One of them is that people and parties in power get to exercise their legal prerogatives. There is now a SC [Supreme Court] vacancy. President gets to nominate to fill vacancy. Senate gets to advise and consent. It is reasonable for this to be done in 40 days or less.”

“Act like adults and accept the results of the process.” — Steve, Falmouth

“Harry Reid made the decision to change certain appointment rules in the Senate and we now see the impact … Such changes generally come back to haunt the deal maker. Why wouldn’t the Republicans later add 30 or 40 justices when they reassume power? It would make the S.C. [Supreme Court] a political joke.” — Bob, Amesbury

“The president and Senate are doing their constitutional duty. Just relax.” — Gail, Belmont

“If the Dems pack the court, it is only a matter of time until Republicans win control of the Senate and then pack it themselves. This will go back and forth until we end up with some insane number of Supreme Court justices. Might be a tough pill to swallow, but I think it best not to open that can of worms.” — Conor, Boston

“They should focus on trying to win in November and stop talk about packing the court, or using impeachment as some type of blocking maneuver. The only thing they can control now is trying to win the presidency.”

“If they succeed, and we have a 6-3 conservative court, we should move to expand the court, but it’s too early to put that out there as a firm position. It’s too close to the election to start a bloody battle that will make Dems look radical and give Tump and his enablers something more to scream about.”

“They should simply honor the nomination as they would insist had the roles been reversed.”

“If the judge is experienced and qualified the Democrats should vote for her. It would help bring the country together.” — Joan, Needham

“Like adults. Don’t act like Mitch McConnell. We are better than that and his cronies in the Senate.” — Mary, Melrose 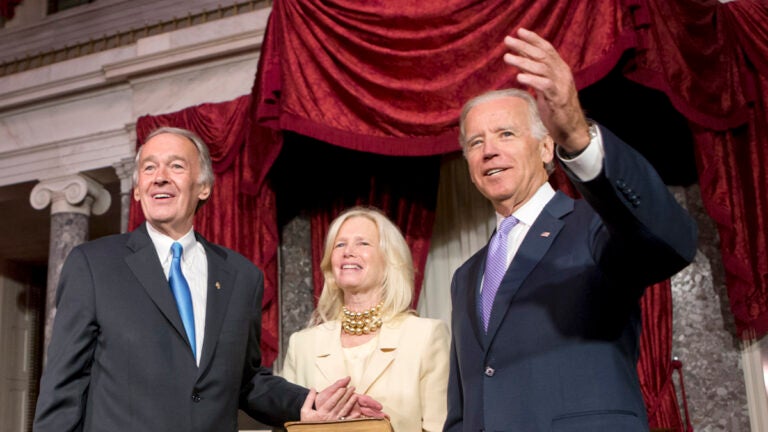