Perhaps the most chaotic presidential debate in modern American history inspired unprecedented reactions on cable and broadcast news by pundits who, in other circumstances, would have been combing over minor moments to gauge who won and lost.

The consensus among many commentators: The losers of the night were the American public.

“That was a hot mess, inside a dumpster fire, inside a train wreck,” said CNN host Jake Tapper. “That was the worst debate I have ever seen. It wasn’t even a debate. It was a disgrace.”

His CNN colleague Dana Bash had even sharper words: “I’m just going to say it like it is. That was a s— show.”

“As someone who has watched for 40 years,” said ABC’s George Stephanopoulos, a previous primary debate moderator, “that was the worst presidential debate I have ever seen.”

Jake Tapper: “That was a hot mess. Inside a dumpster fire. Inside a train wreck. That was the worst debate I have ever seen” pic.twitter.com/Ga7FC5e5Km

Dana Bash is the PG-13 version of all of us right now. pic.twitter.com/ywNdn9puaa

On NBC, “Nightly News” anchor Lester Holt said, “If hearing that this debate is over was music to your ears, you may not be alone,” and declared, “I’m at a bit of a loss for words here to describe what we’ve just witnessed.”

NBC “Meet the Press” host Chuck Todd called it a “train wreck of the making of one person. We know who did it. President Trump did this. And in some way, it’s the only way he knows what to do. He bulldozed over Chris Wallace, bulldozed and, at times, flustered Joe Biden.”

Back on CNN, Anderson Cooper started out his segment with: “I don’t know what came out of this debate. I don’t know what side won. … But you cannot watch that debate and be proud of our president, the way he thinks of us, as viewers, as Americans who are trying to decide about the future of this country.”

While the pundits zeroed in on Trump’s constant interrupting and talking over Biden and debate moderator Wallace’s inability to gain control over the night, one moment in particular caused extreme distress for several commentators: Trump telling the far-right Proud Boys to “stand back and stand by” when asked by Wallace whether he would denounce white supremacists.

“We are in an immoral swamp of misbehavior,” Van Jones said on CNN. “This was not a normal night.”

The debate was so messy that several questioned whether the next two debates should take place. “Can we really have two more of these debates with the type of behavior that was displayed tonight?” Norah O’Donnell said on CBS News.

“That was crazy. What was that?” — @SavannahGuthrie

Other political writers and journalists were similarly dismayed. “I’m the most horrified I’ve been in my career as a political journalist,” tweeted New York Times op-ed writer David Brooks. He also predicted: “This election won’t be close. Have faith in the American people!”

Trump booster and Fox News opinion host Sean Hannity had a different take, declaring on air “the extremely weak, the frail, the confused, kind of angry Joe Biden just got steamrolled by President Trump,” adding that Biden was “unable to respond to the president’s beat downs” and “appeared cranky.”

Fox News senior political analyst Brit Hume said Trump “was like a bucking bronco the entire time. I don’t know how the people at home would find that appealing.”

As for Biden – who Hume earlier in the evening repeatedly said was “senile” – he “came across as competent” during the debate.

Christie added that Biden “looked very shaky” and “used lots of name-calling and a lot of insulting language.” 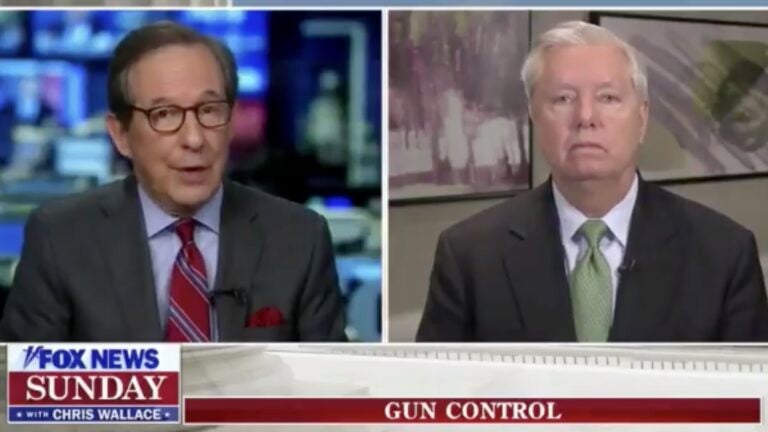 Lindsey Graham says he needs AR-15 for defense: 'My house will be the last one that the gang will come to'