Joe Biden’s campaign website says he believes the Green New Deal is a “crucial framework” for addressing the environmental and economic challenges of climate change.

But during his first 2020 presidential debate with President Donald Trump on Tuesday night, Biden made a surprising statement — at least for the Republican president.

“No, I don’t support the Green New Deal,” Biden said, after Trump repeatedly tried to link the Democratic presidential nominee and former vice president to the ambitious resolution, dubiously claiming that it would cost $100 trillion and eliminate airplanes and cows.

“Oh, you don’t?” he said. “Well, that’s a big statement. That means you just lost the radical left.”

But to Trump’s so-called “radical left” authors of the Green New Deal, Biden’s stance was hardly a surprise.

“I support the Green New Deal and I’m voting for Vice President Joe Biden,” Sen. Ed Markey — who wrote the Green New Deal with Rep. Alexandria Ocasio-Cortez and has made it central to his re-election campaign — said in a statement after the debate Tuesday night,

“Donald Trump is wrong,” the Massachusetts senator added. “The progressive left is with Joe Biden, and we will pass a Green New Deal.”

In a separate message, Markey suggested that the youth-led movement for the Green New Deal would at least defeat Trump and press the Biden administration to pass “aggressive climate action.”

The movement for a Green New Deal is going to defeat Donald Trump and his fossil fuel cronies. We’re going to elect Joe Biden and fight to pass the aggressive climate action which we need. We will work together to deliver a just and equitable future for all children.

Unlike many of his Democratic primary opponents, Biden never fully embraced the Green New Deal, which broadly calls for a 10-year national mobilization to address climate change while also ensuring Americans have access to high-quality health care, jobs, and housing.

Biden said during the debate that he supported his own $2 trillion climate plan, which similarly proposes to accelerate investment in renewable energy to spur economic growth and includes aggressive targets, such as reaching net-zero carbon emissions by 2050.

“This isn’t news, Kellyanne,” the New York Democrat tweeted, noting that her “differences” with Biden were “exactly” why she joined — and led — a unity task force with former Massachusetts Sen. John Kerry to help shape the Biden campaign’s climate plan.

Our differences are exactly why I joined Biden’s Climate Unity Task Force – so we could set aside our differences & figure out an aggressive climate plan to address the planetary crisis at our feet.

Trump, who defended his administration’s sweeping environmental deregulations, acknowledged during the debate that he does believe human activity contributes to climate change “to a degree.” 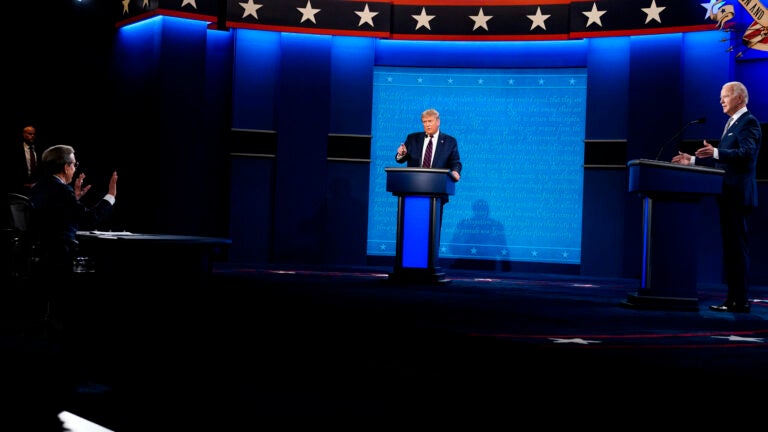