WASHINGTON – The assertion by President Donald Trump’s doctors that he could be discharged from the hospital as early as Monday astonished outside infectious-disease experts, who said he remains in a dangerous period of vulnerability when some covid-19 patients decline precipitously and require urgent intervention.

During a midday briefing Sunday on the president’s medical condition and treatment, White House physician Sean Conley and his team twice referred to planning to release Trump as early as the next day “if he continues to look and feel as well as he does today.”

The talk of the president’s release from Walter Reed National Military Medical Center came as Conley and two other physicians treating Trump gave an upbeat but incomplete characterization of his condition. Outside doctors said they were mystified by what they said was an inconsistent portrayal of the president’s illness as relatively mild despite the aggressive mix of treatments he is getting.

The president’s medical team was at times cryptic: Asked whether CT scans showed any signs of pneumonia or lung damage, Conley replied, “Yeah, so we’re tracking all of that. There’s some expected findings, but nothing of any major clinical concern.” He declined to elaborate. At another point, Sean Dooley, a pulmonary critical care doctor, said the president’s “cardiac, liver and kidney function demonstrates continued normal findings, or improving findings.” He did not disclose which of those had been subpar.

Robert Wachter, chairman of the University of California at San Francisco’s department of medicine, said any patient of his with Trump’s symptoms and treatment who wanted to be discharged from the hospital three days after their admission would need to sign out against doctors’ orders because it would be so ill-advised.

“For someone sick enough to have required remdesivir and dexamethasone, I can’t think of a situation in which a patient would be OK to leave on Day 3, even with the White House’s medical capacity,” Wachter said.

“Absolutely not,” William Schaffner, a professor of infectious diseases at Vanderbilt University’s medical school, said of the idea of sending Trump back to the White House on Monday.

“I will bet dollars to doughnuts it’s the president and his political aides who are talking about discharge, not his doctors,” Schaffner added.

Medical consensus has emerged that covid-19 patients are especially vulnerable for a period of a week to 10 days after their first symptoms. Some patients who seem relatively healthy suddenly deteriorate, either because of the virus itself or an excessive immune response that can cause damage to several organs, including the heart.

A multitude of possible cardiac complications have also been associated with covid-19, the disease caused by the novel coronavirus; the most prominent involves a hardening of the walls of the heart that makes it difficult to pump blood and can lead to heart failure.

“People can be doing OK, but it can get a rocky very quickly,” said Amesh Adalja, a senior scholar at the Johns Hopkins University Center for Health Security and an infectious-disease specialist at the University of Pittsburgh.

Underscoring the concerns is the fact that Trump may be the first patient – he is certainly among the first – to receive an unusual combination of three strong treatments, with a handful of supplements and an over-the-counter drug sprinkled in.

“He’s gotten kitchen-sink therapy,” said Walensky, of Massachusetts General. She noted that when dexamethasone was tested in clinical trials this year, none of the patients were also given the experimental antibody cocktail Trump is receiving.

Several doctors expressed worry that there is no data indicating how these treatments might react with one another, especially in an overweight 74-year-old man with a mild heart condition who is in the high-risk group for severe coronavirus disease.

The list of treatments the president is receiving includes a five-day regimen of the antiviral remdesivir; monoclonal antibodies, an experimental treatment still in clinical trials; and dexamethasone, a steroid found to help patients with advanced respiratory distress. Trump is also taking two unproven supplements (vitamin D and zinc) and an over-the-counter drug (famotidine, the active ingredient in heart burn medication Pepcid.) The president has personally touted the benefits of zinc – in combination with hydroxychloroquine – for the coronavirus, and his administration funded trials of famotidine despite allegations of conflicts of interest.

“All of these are data-free zones. We just don’t know,” Walensky said. She noted the mix of treatments – especially the use of a steroid usually reserved for coronavirus patients whose immune systems are over-functioning – is inconsistent with the characterization by Trump’s physicians that he is getting better.

Lewis Kaplan, a critical care doctor at the University of Pennsylvania and the Veteran’s Administration, said this type of untested combination therapy is typically only applied as a desperate measure – when a patient is seriously ill and probably in the intensive care unit.

On the other hand, he said, giving this cocktail to a sitting head of state as a preventive measure as a way to reduce the risk of a more severe course could be construed as “reasonable.”

“And we just don’t know which one reflects reality,” Kaplan said.

The use of monoclonal antibodies is extremely limited since the treatment is still in late-stage trials so patients would not typically take it in combination with remdesivir. Remdesivir, the Gilead Sciences drug authorized for emergency use in May, is more widely available, but many hospitals reserve it only for the sickest patients.

Joshua Barocas, an infectious-disease specialist at the Boston University school of medicine, said the science makes sense, though he does not know of a case in which a patient received both those treatments at the same time.

“The monoclonal antibodies neutralize the virus, and the remdesivir stops the viral replication,” he explained.

Dexamethasone is recommended only in patients who are extremely ill, according to many guidelines, but a number of hospitals routinely give the drug to any patient who requires supplemental oxygen, if only for a few hours. A recent study found it tends to reduce deaths from the virus, but nearly a quarter of infected patients getting it with supplemental oxygen – as Trump has – still died.

Steroids in high doses and over long periods of time also can lead to serious changes in mental status that include delirium, hallucinations and confusion.

Barocas said that at the dose typically used for the coronavirus, this is unlikely to be an issue and White House physicians are probably monitoring the president closely.

“It’s not outside the range of possibilities that he could have that adverse event,” Barocas said.

Another drug the president is taking, famotidine, remains controversial. The Trump administration earlier this year granted a &#36;21 million emergency contract to researchers to try famotidine on ill patients despite a whistleblower complaint that it was rushed through by the Department of Health and Human Services without the necessary scientific oversight. According to an investigation by The Associated Press, internal emails show that a top Food and Drug Administration official expressed concerns that the daily injections, which are experimental, pushed safety “to the limits.”

“There’s no evidence at this point to suggest vitamin D or zinc do anything for or against covid. And I haven’t seen any good evidence about famotidine,” Barocas said.

“I really don’t want these other medications to become the next hydroxychloroquine,” he added, referring to Trump’s touting of the anti-malarial drug without evidence of its effectiveness. The drug was subsequently found to offer no benefits to covid-19 patients.

Hydroxychloroquine is not on the list of medications his doctors said Trump is taking at Walter Reed.

Another treatment missing from Trump’s regimen is a blood thinner given as a standard practice these days to any hospitalized patient with covid-19 to reduce the risk of clots. In the spring, many doctors were surprised to find that microclots that appear in the lungs and heart appeared to be killing some patients.

Doctors speculated that the president may have declined the treatment after what happened to his younger brother, Robert, who died in August due to brain bleeds. He had been taking blood thinners.

Experts acknowledged that discharge from the hospital for a sitting president would be different than for a normal person and would not necessarily indicate the same level of stability in his illness.

Hospitals, they noted, typically do not discharge patients who are on IV medications, and Trump is in the middle of a five-day course of remdesivir that is given intravenously.

But a team of specialists could continue to monitor him at the White House and would probably have access to heart monitors, oxygen tanks, and even a “crash cart,” which contains materials to resuscitate a patient should he need that.

The president would also have his regular fleet of helicopters and other transportation at his disposal to get him to the hospital quickly if needed.

But Barocas said the decision whether to discharge the president should not just be about his condition but also about the White House staff, including cooks, butlers, housekeepers and other personnel, who work in the buildings.

When it comes to infectious diseases such as covid-19, he said, “we want to make sure we have a place for someone that is not only safe for them – but safe for them to isolate so they won’t infect other people.”

“My concern is,” he said. “What are the protections for the people who will have to care for this elderly man who probably won’t isolate and won’t wear a mask?” 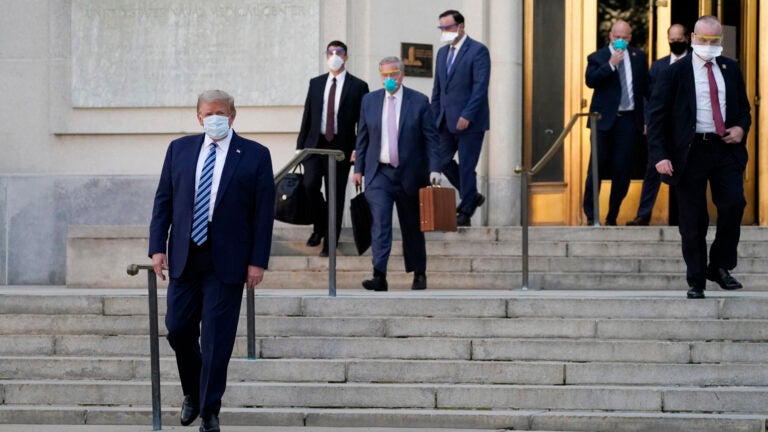