WASHINGTON – Secret Service agents and medical professionals were aghast Sunday night at President Donald Trump’s Sunday evening trip outside the hospital where he is being treated for the coronavirus, saying the president endangered those inside his SUV for a publicity stunt.

As the backlash grew, aides who were not authorized to speak publicly also called Trump’s outing to wave at supportive crowds an unnecessary risk, but said the move was not surprising. Trump had said he was bored in the hospital, advisers said. He wanted to show strength after his chief of staff offered a grimmer assessment of his health than doctors, according to campaign and White House officials.

A growing number of Secret Service agents have been concerned about the president’s seeming indifference to the health risks they face when traveling with him in public, and a few reacted with outrage to the trip, asking how Trump’s desire to be seen outside of his hospital suite justified the jeopardy to agents protecting the president. The president’s coronavirus diagnosis has already brought new scrutiny to his lax approach to social distancing, as public health officials scramble to trace those he may have exposed at large in-person events.

“He’s not even pretending to care now,” said one agent after the president’s jaunt outside Walter Reed National Military Medical Center.

“Where are the adults?” said a former Secret Service member.

They spoke on the condition of anonymity out of fear of retribution.

White House spokesman Judd Deere defended the outing, telling reporters that “appropriate precautions were taken in the execution of this movement to protect the president and all those supporting it.” Deere said precautions included personal protective equipment, without providing further details, and added that the trip “was cleared by the medical team as safe to do.”

The White House did not immediately respond to questions from The Washington Post on Sunday night.

Trump wore a mask as he waved to a crowd from the back of his vehicle, after announcing that he would “pay a little surprise to some of the great patriots that we have out on the street.” But the face covering was little comfort to doctors, who took to Twitter to criticize the trip as irresponsible. Masks “help, but they are not an impenetrable force field,” tweeted Saad Omer, director of the Yale Institute for Global Health.

Among critics was a doctor affiliated with Walter Reed.

“Every single person in the vehicle during that completely unnecessary Presidential ‘drive-by’ just now has to be quarantined for 14 days,” tweeted James Phillips, who is also a professor at George Washington University. “They might get sick. They may die. For political theater. Commanded by Trump to put their lives at risk for theater. This is insanity.”

Phillips said the risk of viral transmission inside the car is “as high as it gets outside of medical procedures.” Jonathan Reiner, a professor of medicine and surgery at George Washington University, noted that people inside a hospital wear extensive protective gear — gowns, gloves, N95 masks and more – when they will be in close contact with a coronavirus patient such as Trump.

“By taking a joy ride outside Walter Reed the president is placing his Secret Service detail at grave risk,” he tweeted.

Megan Ranney, a practicing emergency physician at Brown Emergency Medicine in Rhode Island and founding director of the Brown-Lifespan Center for Digital Health, also noted the potential danger to agents, noting that almost a dozen have already been infected during the pandemic.

Ok, let’s look at the facts surrounding this joy ride:
1. He is still infectious
2. CDC guidelines require isolation for a minimum of 10 days after a + test, no matter who you are
3. Almost a dozen secret service agents have already been infected
4. The car is a closed space https://t.co/TfebDUOT5R

Here in Massachusetts, Attorney General Maura Healey took to Twitter to decry Trump’s “joy ride,” describing the president as “a disgrace and, at this point, a total liability.”

Donald Trump taking a joy ride shows how little he values the lives of the over 209K Americans who’ve died from COVID-19 as well as the lives of the public servants he endangered today. He is a disgrace and, at this point, a total liability. https://t.co/8rjoMOVO7I

Trump had been irked that White House Chief of Staff Mark Meadows suggested that he was not doing well as he fought the virus, according to campaign and White House officials.

“The president’s vitals over the last 24 hours were very concerning, and the next 48 hours will be critical in terms of his care,” Meadows said Saturday afternoon, in sharp contrast to doctors who offered rosy assessments at an earlier news conference. “We’re still not on a clear path to a full recovery.”

Later that day, Meadows said Trump’s condition had improved significantly but maintained that the president was “not out of the woods,” echoing Trump’s doctor.

Trump’s outing Sunday came as White House officials acknowledged that the president’s health deteriorated to the point where he received supplemental oxygen, something they previously refused to disclose. Trump’s doctor Sean Conley said Sunday that he was “trying to reflect the upbeat attitude that the team, the president, over his course of illness, has had.”

“Optics matter right now,” said one senior aide close to Meadows, adding: “Shows of strength and resilience are crucial. For the American public, but also those watching abroad.” 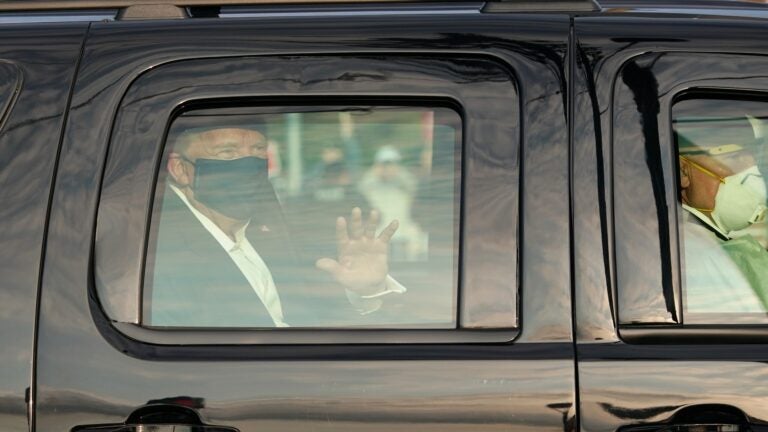