At last week’s presidential debate, President Donald Trump refused to condemn white supremacists and far-right groups like the Proud Boys, an organization that has been known to incite violence.

The president’s comment telling the Proud Boys to “stand back and stand by” provided a boost to the group on social media, emboldening its members to use Trump’s words as a rallying cry. Two days later, amid rising outrage, Trump denounced the group.

But then actor and activist George Takei suggested a clever comeback — a way to drown out the hate on social media and replace it with something, well, gay.

“What if gay guys took pictures of themselves making out with each other or doing very gay things, then tagged themselves with #ProudBoys. I bet it would mess them up real bad. #ReclaimingMyShine,” Takei, who is gay, tweeted on Thursday.

The call to action went viral over the weekend, with thousands adopting the hashtag and posting images and messages of love and support — all with the intent to take over a moniker linked to hate.

Noah Reed, a 30-year-old content creator in New York, posted pictures with his fiance, Derek Ivie, a 35-year-old librarian. For Reed, the tweet symbolized more than just jumping on a trend.

“Aside from voting, I think a lot of us are trying to do anything we can to really make a difference or, not necessarily silence, but push back the neo-Nazis and the far-right groups that are spreading hatred,” Reed said in an interview with The Washington Post on Sunday.

Many gay men took the opportunity to post images with their partners and children.

“#ProudBoys we will never stand back and standby! Together for 25 years with 2 amazing children,” another man tweeted.

Famous gay figures also joined in, including TV personality Andy Cohen and Bobby Berk from “Queer Eye.” Actor Matt Bomer used the hashtag to promote “The Boys in the Band,” a movie adaptation of the play about a group of gay men gathered at a birthday party that recently premiered on Netflix.

The Twitter account for the Canadian Forces in the United States posted an image with a serviceman in uniform kissing his partner. As of early Monday, the tweet has more than 200,000 likes.

The Royal Canadian Navy retweeted the image with the caption: “Our #ProudBoys. Love is love.”

#ProudBoys festival in Houston TX at PECS and BULGES bar and Grill.
Meet your fellow #ProudBoys there. pic.twitter.com/GgwvwoBdMZ

Allies of the LGBTQ community also participated by retweeting and posting images of family members or gay couples they admire.

One woman tweeted an image of Pete Buttigieg, a former Democratic presidential candidate and ex-mayor of South Bend, Ind., and his husband, Chasten, with the caption: “I know two amazing #ProudBoys who have made our Nation PROUD!”

“My son, who is a highly intelligent, talented, and courageous FtM trans teenager. He gives me hope that his generation can and will stand up to hatred and make the world a better place for all human beings. #ProudBoys,” she wrote.

Reed said that seeing so many allies join in on the trend was encouraging.

“It makes my heart feel joy when I see that not only LGBTQ people are doing this, but also so many other people are supporting it,” Reed said. “It is nice when there is solidarity and spreading positivity.”

This is not the first time the Proud Boys have been targeted on Twitter. Leading up to a rally in the District in 2018, the platform suspended over a dozen accounts linked to the group, including the account belonging its co-founder Gavin McInnes, who also co-founded Vice magazine. (McInnes later distanced himself from the Proud Boys.)

The Proud Boys have not responded kindly to the hashtag takeover. On Parler, a conservative social media app, followers of the Proud Boys group expressed outrage, with many commenting on screenshots of the tweets with homophobic slurs, according to Forbes. One member created a meme of Takei making a white supremacist gesture and another replied using Nazi terms like “final solution.”

Bandwagon campaigns like the #ProudBoys takeover are not always successful, Reed said. He pointed to the campaign #BlackoutTuesday, where people posted black squares on Instagram. It was an effort that may have caused more harm than good, he said, with some arguing that the blank squares tagged with #blacklivesmatter drowned out vital voices and information about protests.

But Reed believes this undertaking is different because the stakes are lower.

“With this one, the worst that can be done from it is that group can be drowned out, so I feel like that’s a win,” Reed said. 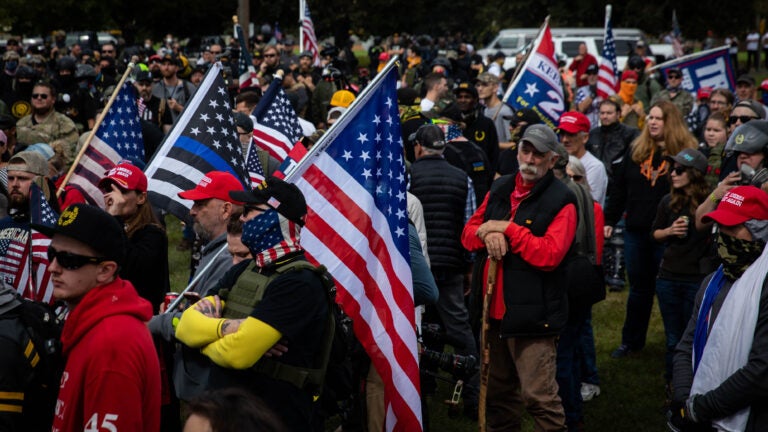 So who exactly are the Proud Boys?