The councilors have some similar stances when it comes to the Walsh administration, as both have criticized the mayor for how he has approached racial equity and have offered their first-hand experience on what it’s like to face racial injustices and disparities as a strength for their respective candidacies.

Wu, who kicked off her campaign a week ahead of Campbell’s last month, was asked during an appearance on WCVB’s “On The Record” Sunday whether their similar positions could stand to benefit Walsh.

“I have tremendous respect for my colleague, and I’m excited about the conversation that the City of Boston will have over this next year about what our future should be,” Wu said, referring to Campbell’s entrance into the race. “The focus in this campaign and for the next year is going to be on the residents of Boston — the struggles and dreams of every neighborhood, every community. And we’ve been out since our official launch a few weeks ago — social distanced — at T stations, in small businesses, out in parks hearing from residents about what future we could shape together.”

In announcing her campaign, Wu, 35, said the city needs “leadership that matches the scale and urgency of our challenges,” pointing to the movement to address systemic racism locally and nationally, and the health and economic ramifications of the coronavirus pandemic.

Last week, Boston entered the “red zone” — the state Department of Public Health’s designation for communities most at risk of the coronavirus — as the number of cases have ticked upward in recent weeks.

Asked Sunday whether she would handle Boston’s approach to the pandemic differently than Walsh, Wu generally did not offer criticisms of specific decisions or policies, but said the city must put its resources beyond only “immediate relief and band-aids of the situation.”

“I think it’s important that we recognize that the rates are ticking up in Boston right now, as across the state, and to emphasize that our reopening cannot come at the expense of public health,” Wu told WCVB. “I’m a mom and my son is in Boston Public Schools and so I know there’s been a tremendous amount of anxiety and uncertainty. Even as the city is grappling with this we need longer-term planning, we need a vision that actually lays out the steps for a true recovery.”

As for reopening schools, Wu said the school district must prioritize health and safety and not rush to reopen doors.

The district has opted for a phased-in return to school buildings under its hybrid learning plan. Students who were prioritized for re-entering brick-and-mortar classrooms began attending classes in person last Thursday.

“We’re really not left with great options for our school district to choose between right now,” the councilor said. “The school district and the administration should have started much earlier, way back when we first shut down schools in March and certainly earlier in the summer to lay out the plans for how we could support this system.

“Our buildings … many of them, date back to before World War II and only about 30 of about 120-plus Boston school buildings have modern HVAC systems — right? — modern heat, cooling, ventilation,” Wu continued. “For the rest of the schools, it means cracking the window open and hoping that that will be enough air flow in this pandemic, which is largely airborne. And so there’s a lot left to go in terms of the facilities, supporting our teachers who are trying to do remote learning in a very new environment, and having to grapple with potentially a hybrid system where they will have to teach both in-person and remote students at the same time. It is incredibly stressful all around. We should be supporting our district and think larger than just the school system in a silo.”

In June, Wu and Campbell were among the councilors who voted against Walsh’s $3.6 billion operating budget — a revised proposal that included a reallocation of $12 million from the Boston Police Department overtime budget and into mental health programs and other community services.

While the budget ultimately passed, those who voted against it said it did not go far enough in addressing longstanding systemic racism and racial inequalities in the city.

“This isn’t about whether we’re cutting $10 million or $15 million,” Wu said Sunday when asked how much money should be funneled away from the department. “There’s no magic number that will get to equity and addressing the lived experiences of Black and brown residents in this city. This is about reimagining our systems, transforming how we think about what’s possible for our city … We have to put our resources (into) rethinking these systems, what are the goals, how do we get there, and, most importantly, how do we keep communities at the table to make these decisions?”

So far, Walsh, who has not explicitly said whether he will seek a third term, has strong support among voters. A GBH/MassINC poll conducted in September found the mayor had 46 percent of support in the potential three-way race, while Wu carried 23 percent, and Campbell logged 4 percent.

Watch more of Wu’s appearance on “On The Record:” 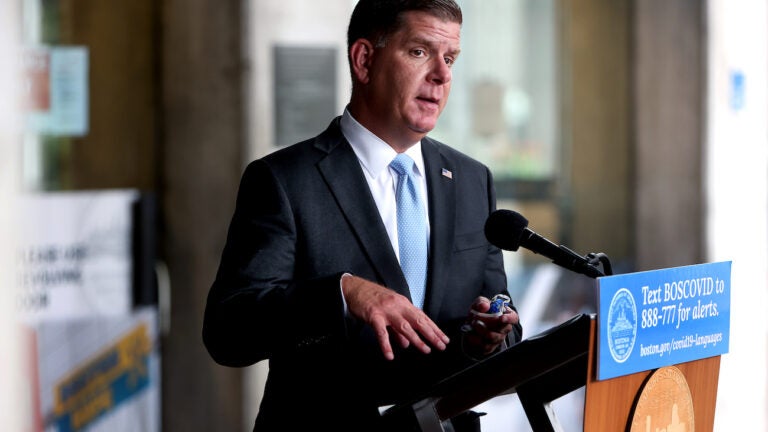