The two candidates debated from separate studios at the GBH headquarters in Brighton. And from the start, they did not agree on much, including the format.

How — and how not — to handle the pandemic

The debate — which coincided Monday night with President Donald Trump’s departure from a hospital after contracting COVID-19 and a New England Patriots game that had been postponed due to players testing positive for the virus — naturally began with the pandemic.

O’Connor repeatedly criticized Markey’s “failure” to call out China for not sharing information about COVID-19 during the early stages of what soon become a global outbreak.

“Senator Markey has a long record of weakness in terms of dealing with China and his weakness, on a sustained basis, poses the greatest threat to American security and American safety,” said the Dover attorney, who criticized Markey for “weakness” a half dozen times during the debate.

“That’s just plain wrong,” Markey shot back. “When the President said that he was going to cut off travel from China, I agreed with him and I said so publicly.”

For his part, Markey mostly faulted Trump’s handling of the COVID-19 response, calling the Republican president “criminally negligent,” from the onset of the pandemic through his comments Monday telling people not to be afraid of the virus.

Markey noted that he requested information about the Trump administration’s preparations as early as January and also called on Trump to appoint a coronavirus response czar later that month.

“I was the first senator to call upon him to use the Defense Production Act to produce the testing, the PPE, the tracing technologies that were necessary,” he said.

Both candidates gave Massachusetts Gov. Charlie Baker an “incomplete” grade on the virus, though for slightly different reasons.

Markey said the Republican governor was “hindered” by the lack of federal support, but that his administration did not do enough to stop large, deadly outbreaks in nursing homes in Holyoke and Chelsea, among other places.

O’Connor emphasized the need to reopen businesses and schools “safely.”

Markey said that could only be done with more federal support, arguing that the most recent relief proposals by Republicans in Washington, D.C., are not “enough to match the magnitude” of the health and economic crisis.

But O’Connor said Markey was being too extreme in his asks, particularly dialing in on the senator’s often-touted proposal to send $2,000 monthly direct payments to every individual with an income below $100,000, retroactive to March.

“It is a grossly irresponsible proposal,” O’Connor said, arguing it was unaffordable.

Markey said the payments could be paid for, at least in part, by repealing the Trump tax cuts.

‘The bottom line is he’s clearly a big Trump supporter’

Time and again, O’Connor tried to paint himself as more moderate compared to Markey’s left-of-center stances on Medicare-for-All and the Green New Deal, which the senator co-wrote.

The debate highlighted some issues on which O’Connor said he disagrees with Trump; he supports legal abortion with limits, as well as the Deferred Action for Childhood Arrivals program, which gives at least temporary legal status to undocumented immigrants who were brought into the country as children. He also said he didn’t agree with the administration-backed lawsuit to repeal the Affordable Care Act, though he supports repealing the landmark bill if individuals with pre-existing still have access to plans.

But on the whole, O’Connor voiced support for the national Republican agenda and backed the move to hold a Supreme Court confirmation hearing on Judge Amy Coney Barrett’s nomination to the Supreme Court during Trump’s first term.

Markey argued the race came down to a simple truth: A vote for his GOP opponent was effectively a vote for Trump and Senate Majority Leader Mitch McConnell.

“The last thing we need in Massachusetts is to send another Republican down to help Mitch McConnell stop a green energy revolution, to stop the expansion of health care benefits in our country, to stop ensuring that we have real criminal justice reform,” Markey said.

O’Connor — who says he plans to vote for Trump over Democratic nominee Joe Biden — said Markey was trying to make the president his election opponent.

“I am running as a Kevin O’Connor Republican,” he said. “I have articulated for you what my positions will be. They’re consistent, largely, with Governor Baker’s positions, who again is endorsing me not Sen. Markey.”

Dismissing the senator’s Green New Deal as “posturing,” O’Connor insisted he would be a “pro-environment senator” and said he supported a free-market think tank’s plan to achieve net-zero carbon emissions by 2050 through “innovation in terms of energy technology.”

O’Connor said he’d be willing to work across party lines to pass legislation, but also stood by his support of Trump, whose popularity is severely underwater in Democratic-leaning Massachusetts. Markey worked to highlight that fact.

“The bottom line is he’s clearly a big Trump supporter and I clearly am a big Biden supporter, and all of the issues, for the most part, are sub-divided along those lines,” Markey told reporters after the debate.

Of course, it wouldn’t be a debate if there wasn’t some debate about the debate.

By all accounts the underdog in the race, O’Connor has challenged Markey to participate in seven general election debates, which is more than the number of debates in the yearlong primary between the senator and Kennedy. But for almost a month, Markey’s campaign has maintained that the debate Monday would be the first and “final” such event of the two-month general election sprint.

Markey campaign manager John Walsh has said one should be enough to “highlight the stark differences” between the Democratic senator and his GOP opponents.

O’Connor was also irked by the fact that the format was changed at the last minute Monday to place the candidates in separate studios. GBH had originally planned for the event to follow social distancing guidelines, similar to the five primary debates during the COVID-19 pandemic between Markey and Kennedy.

The public broadcasting station announced less than 90 minutes before the debate’s start that they “determined it would be best to have the candidates in separate studios within GBH” in order to “provide the highest level of safety and comfort” for those involved. The announcement came a day after Markey’s campaign announced he tested negative for COVID-19 — and just minutes after O’Connor tweeted that his opponent’s “camp is up to some shenanigans.”

“What we saw was a changing of rules by people with the power to do it,” O’Connor said during the debate, after suggesting that it was part of an effort by the incumbent to avoid debate.

GBH host Jim Braude apologized for the timing of the format shake-up, contending that the “the world changed on Friday and we tried to change with it” alluding to Trump’s positive COVID-19 test.

“We’d much prefer to have you in here,” Braude said.

After the debate, not even Markey said he would recommend the multi-studio format, which he said was GBH’s decision. Even though he debated in person with Kennedy in late spring, when the statewide positive test rate in Massachusetts was still several times higher than the current rate, Markey said Trump’s recent debate with Joe Biden — and the possibility the president could have been contagious — was “instructing further discussions” about when it was appropriate to have people together without face coverings.

“I think that the decision to err on the safe side of safety was the correct one,” Markey said.

At the very beginning of the debate, O’Connor was asked about photos of himself with supporters not wearing masks and argued it wasn’t necessary to wear a mask during brief interactions.

“We know that unfortunately, too many people don’t believe in wearing masks and they associate with other people who wear masks,” Markey said after the debate. “And since there’s no way of really corroborating that, I think what GBH tonight decided was to protect their own employees and I think, additionally, the two candidates know to just be more cautious.” 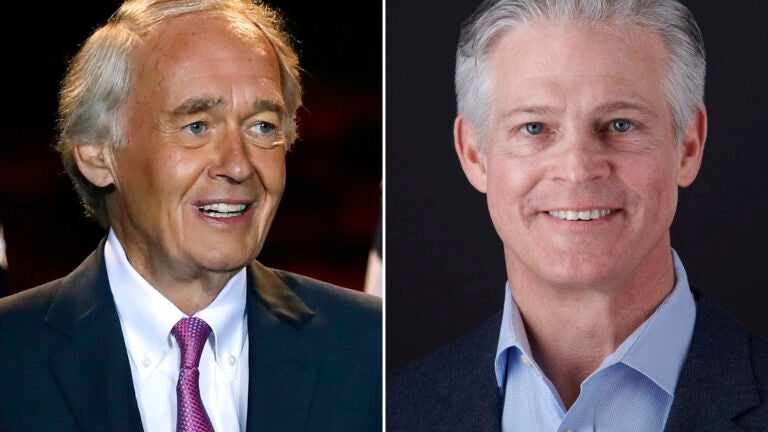