President Donald Trump has repeatedly been asked about — and even promoted — the baseless and bizarre QAnon conspiracy theory.

Still, during a town hall scheduled in lieu of a canceled presidential debate Thursday, Trump claimed he knew nothing about the fringe movement, which has increasingly gained popularity among the Republican president’s supporters.

The theory vaguely posits that many global elites are secretly Satan-worshiping pedophile Democrats and that Trump is the sole savior who will defeat them. During the town hall Thursday night, NBC News anchor Savannah Guthrie asked Trump if he would state that the theory is “completely not true.”

“I know nothing about QAnon,” Trump said.

“I just told you,” Guthrie replied.

Trump asked why Guthrie wasn’t asking him about the “radical left” and Antifa, which he has often derided for acts of violence; earlier on Thursday, Trump even cheered the recent killing of an Antifa activist by federal agents.

Guthrie, however, pressed Trump on why he wouldn’t condemn QAnon like some fellow Republicans, including Nebraska Sen. Ben Sasse, who called the theory “nuts” and speculated that Trump’s refusal to disavow it could cost their party in the Nov. 3 election. Trump said Sasse may be right that the theory is false, but said he was personally unsure.

“What I do hear about it is they are very strongly against pedophilia, and I agree with that,” he said.

The FBI has reportedly labeled QAnon, among other politically-tinged conspiracy theories, as a domestic terrorism threat. Closer to home in the Boston area, the conspiracy has made more headlines for endangering children than it has for doing anything about actual pedophilia.

Despite his claims of knowing “nothing” about the theory, Trump called QAnon supporters “people that love our country” in August and has repeatedly retweeted posts from prominent QAnon accounts.

But on Thursday, he worked to change the subject, misquoting comments about Antifa by Democratic presidential nominee Joe Biden (during the last debate, Biden referenced FBI Director Chris Wray’s statement that Antifa is more of a “movement or an ideology” than an “organized group”).

“Why aren’t you asking Joe Biden questions about why he doesn’t condemn Antifa,” Trump said Thursday. “Why does he say it doesn’t exist?”

“Because you’re here in front of me,” Guthrie noted. 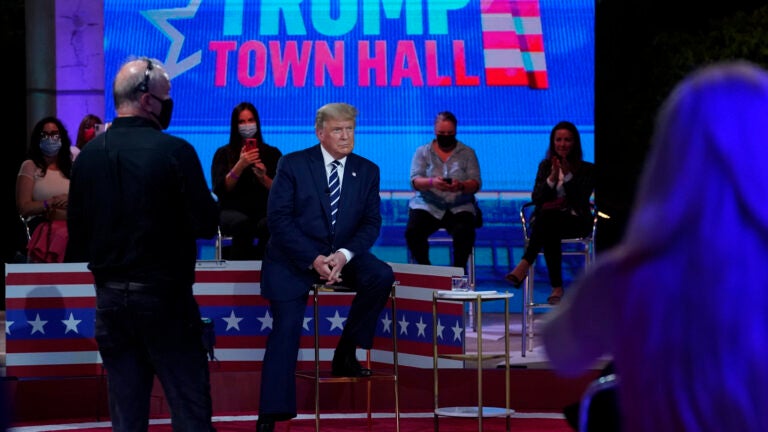