President Donald Trump told former Vice President Joe Biden Thursday he ran for the presidency in 2016 because the Democratic nominee “did a poor job” while serving in the Obama administration.

“You know Joe, I ran because of you,” Trump said during the final debate ahead of the Nov. 3 election. “I ran because of Barack Obama, because you did a poor job. If I thought you did a good job I would have never run.”

Trump’s remarks came after the president took aim at Biden for his role in crafting the controversial Violent Crime Control and Law Enforcement Act as a senator in 1994. The law has been often criticized as a catalyst for mass incarceration, which disproportionately impacts Black Americans and minority communities.

Biden made his case for his plan for criminal justice reform, which includes incentivizing states to eliminate mandatory minimums for non-violent crimes and diverting individuals convicted solely on drug charges to drug courts and treatment services.

“If I thought you did a good job I would have never run.” #Debates2020 https://t.co/w0fsY3l70v pic.twitter.com/piHf4bKTjY

Earlier, Biden highlighted Trump’s own prior calls for more incarceration, pointing to the president’s push for the death penalty following the arrests of the Central Park Five in 1989 — the five Black and Latino teenagers wrongly convicted for the rape of a jogger.

“The fact of the matter is, in 2000, … after the crime bill had been the law for a while, this is a guy who said the problem with the crime bill is there’s not enough people in jail,” Biden said.

He added later, “I’m looking at you now, you’re a politician. I ran because of you.” 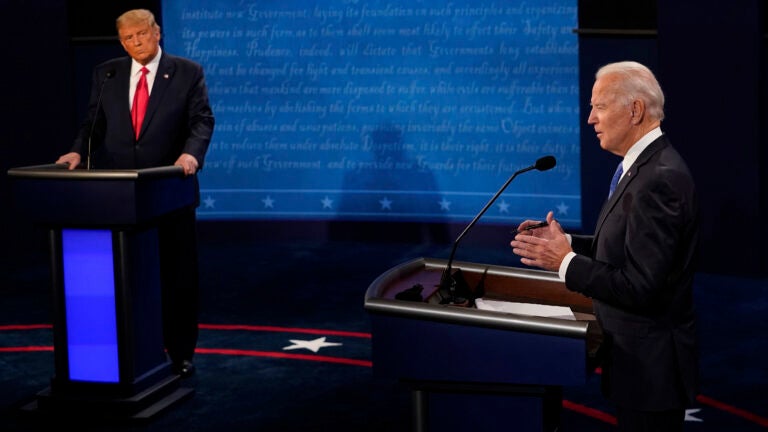 After Boston schools shift to fully remote learning, Trump and Biden weigh in on reopening classrooms