On the eve of the Senate’s expected vote to confirm Barrett and solidify a conservative majority on the nation’s top court, New England Democrats from across the ideological spectrum said they’d consider expanding the nine-member bench if Republicans go forward, violating the standard set four years ago when the GOP-controlled chamber refused to consider one of President Barack Obama’s nominees during an election year.

“The American people should have a voice in the selection of their next Supreme Court justice. Therefore, this vacancy should not be filled until we have a new president,” Maine. Sen. Angus King said during a floor speech late Sunday night, quoting the 2016 comments of Sen. Mitch McConnell, the Republican majority leader, in opposition to Obama’s nomination of Merrick Garland.

King, a moderate independent who often votes with Democrats, said he had heard a “great deal of pearl-clutching” about potential court packing, but noted that the Constitution does not require a specific number of justices on the Supreme Court, which repeatedly changed during the 1800s.

During a separate floor speech Sunday night, Sen. Elizabeth Warren similarly said that “if Trump and Republicans succeed in ramming this nomination through, the American people will expect us to use every tool we have to undo the damage and restore the Court’s integrity.”

“I’m under no illusions here,” the Massachusetts senator said. “Democrats have fought tooth and nail, but the Republicans control the Senate. The reason the Republicans are willing to break every rule to jam through an illegitimate nomination eight days before the election is that they have realized a truth that shakes them down to their core: the American people are not on their side.”

I’m heading to the Senate floor now to talk about Donald Trump and Senate Republicans’ corrupt and illegitimate process to steal a Supreme Court seat, and why Amy Coney Barrett will help hand our courts to the rich and powerful. Tune in live. https://t.co/fbEo5wmz5o

The two New England senators characterized the confirmation hearings as a “sham” and a “waste of time,” criticizing Barrett for not answering questions about her views on issues like reproductive rights, LGBTQ rights, immigration, climate change, and election law. But based on Barrett’s history and her support from conservative activists, Warren said the judge’s “attempt to remain silent on key issues spoke volumes.”

“It shows that she believes these critical rights, protections, and values are debatable — up for grabs,” Warren said, stressing that Barrett could be the difference in an upcoming challenge to the Affordable Care Act.

Those policy arguments have proved less than convincing to the opposing party. But the veiled threats of expanding or reforming the court if Democrats control the Senate have only grown as Barrett nears confirmation.

“Don’t think when you have established the rule of ‘because we can,’ that should the shoe be on the other foot, you will have any credibility to come to us and say: ‘yeah, I know you can do that, but you shouldn’t,’” Rhode Island Sen. Sheldon Whitehouse told Politico earlier this month.

For his part, Markey has made the threat less veiled, explicitly calling for packing the court if Republicans confirm Barrett — to the annoyance of Democratic presidential nominee Joe Biden, who has emphasized more deescalatory responses.

We must expand the Supreme Court.

Senate Democrats did have some company in their opposition to confirming Barrett before the election; Maine Sen. Susan Collins and Alaska Sen. Lisa Murkowski broke Republican ranks to filibuster Barrett’s nomination. But that didn’t sway the chamber’s partisan balance. Barrett’s nomination was advanced Sunday night on an otherwise party-line 51-48 vote.

Republicans have largely stood behind Barrett’s qualifications for the job. In a speech Monday morning, Sen. Mitt Romney called Barrett “a woman of unquestionable character and integrity” at a time when public confidence in institutions is declining.

“She will be critical to the preservation of the public’s perception of the legitimacy of the Court,” said Romney, a Utah Republican and former Massachusetts governor.

But ahead of an expected final vote Monday night, some Democrats continued to warn that confirming Barrett would leave them with no other choice than to take action in response to what Markey characterized as “outright theft.”

“If Republicans succeed here today in their effort to confirm yet another conservative Supreme Court justice just days before the presidential election, as soon as the Democrats take back control of the Senate in January, we must abolish the filibuster and expand the Supreme Court,” Markey said on the Senate floor Monday afternoon. 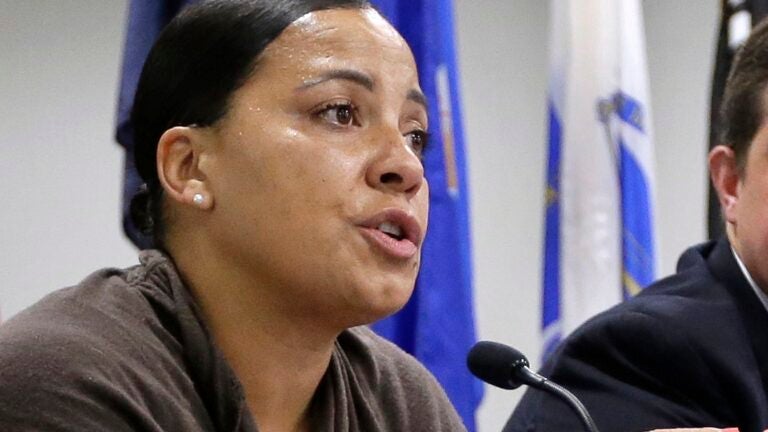