For the last time before Election Day, President Trump and former Vice President Joe Biden faced each other in-person for 90 minutes on the political debate stage to argue their final cases for the presidency to the American people on Thursday night.

Moderated by NBC News’ Kristen Welker, and this time, with a mute button, the candidates were more controlled which was a stark difference from the chaotic first and only other in-person debate between the two.

On the topic of race, Trump said he was “the least racist person in the room” to moderator Welker. Biden said there is an institutional racism problem the country needs to address. The two also sparred on taxes, fracking, and climate change.

Ahead of the debate, we asked Boston.com readers if either performance would influence their vote. Overwhelmingly, 94% said ‘no,’ that they had already made up their mind on who to vote for. After the debate, we pressed  the same question again. Only 21% said ‘yes’ while over 7,000 others wrote in to say ‘no.’ 18% had already voted.

So, who won? It was a close call from readers. 15,320 voted across our survey, by email, and by Instagram poll. Interestingly, results from the social media poll tipped the scale—without the Instagram votes, Donald Trump would have won at 51%.

With 2,333 votes on Instagram, however, Joe Biden was ultimately the debate winner, according to readers at 54%.

Though divided, readers also agreed on several things. Many said this debate was less chaotic and that they were thankful for the mute button. On both sides of the political spectrum, readers noted that Kristen Welker moderated effectively. Some even named Welker the winner. Most said the debate didn’t change their mind or their vote. The Associated Press reported that a record-breaking 58.6 million Americans have already cast their vote. Election Day is just one week away on November 3.

Here’s what some readers had to say about the final presidential debate.

“I was glad to see and hear a more ‘traditional’ debate. I found Biden relatable. One thing that stood out is the president saying we’ll be successful and come together. I feel the opposite. We come together and create success. That comment very much stuck with me.”

“Trump cleaned the slate! ‘I run because of you’ was the statement of the night.”

“Both candidates did a much better job of self control and accomplished more discussion.”

“Joe Biden stayed on message. Called the President out for his most criminal behaviors that has cost American’s lives. I will be proud for Joe Biden to be the 46th President!”

“Donald Trump should have performed like this at the first debate and it would have been clear a long time ago who should be elected. Joe Biden tired out the phrase ‘come on,’ dodged questions, and pandered at the American people about ‘character’ being on the ballot. I didn’t buy it.”

A reader who voted for Joe Biden in the poll wrote, “I believe the bar is set so low for Trump that because he was able to hold it together, that he will be seen as the winner of the debate.”

“I didn’t want to throw the TV out the window this time.”

“Trump saying he was the “least racist person in the room” while the woman of color asking the questions watched. So disrespectful.”

“Thought that Donald J. Trump was assertive and knew what he was talking about opposed to Joe Biden.”

“Biden. Cause he’s the best! He’s supporting trans rights. Which means the world to me.”

“Trump was much calmer.”

“Both performed relatively well without deviating significantly from who they are. That helps Biden but hurts Trump.”

“Trump took the debate far more seriously then the first one, and performed better as a result..Some things that stood out for me were Biden gaffing and calling Trump “Abraham Lincoln,” and him claiming that raising the minimum wage to $15 an hour wouldn’t lead to large layoffs, and Trump coming back to the point that he isn’t a career politician trying to remind the people why they elected him in the first place.” 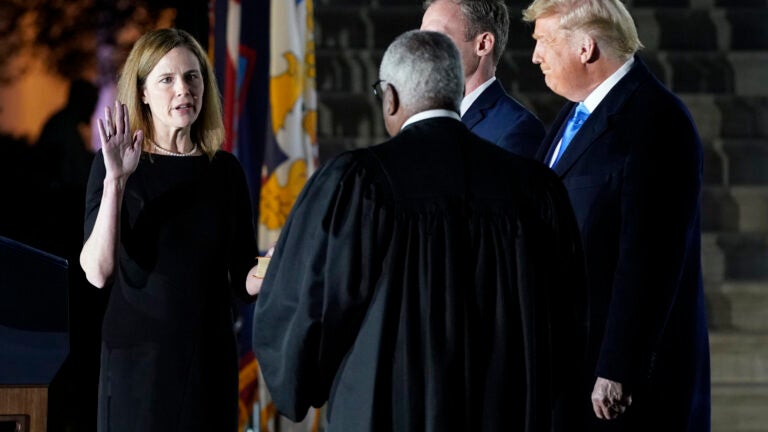